The Wednesday Poem and local music and culture round up

We'll start with congratulations to Mark Warren for winning the Barnet Libraries local photography competition with this absolutely amazing picture of the Totteridge Valley. We've been supporting this competition and are pleased that it got such a great response.

Don't know faces, out of place
Iraqi's killing their own race
The atmosphere of war is soaring
Dimly lit, reality Ballroom

This is the second verse of a song I co wrote with Pete Conway in 1979, which I have slightly updated. The song is about awaking from a nightmare, to find that reality is even worse. I never dreamed that when we wrote it, we'd have a situation 40 years later, where a President of the USA would threaten cultural heritage sites. It is depressing beyond belief. I always used to believe that sane rational people would always seek to leave the world a better place after they've gone. What will Trumps legacy be? I hope it is not the same as the Taliban smashing ancient treasures in Afghanistan.

A bit of a dry time of year, but here are a few to note. Starting with tonight!


The Stephen Rushton Sextet - 8 Jan - One of the UK's most in-demand drummer, percussionist & multi instrumentalists w/ an impressive list of credits to his name. Worked w/ Imelda May on her number one albums, & w/ Jeff Beck on his Grammy nominated album! Not to be missed. Plz RT
— Mill Hill Jazz Club (@millhilljazz) January 4, 2020


This Sunday in Finchley 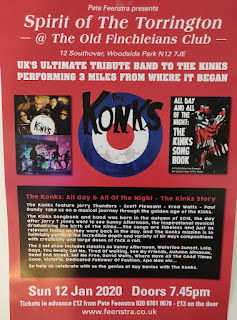 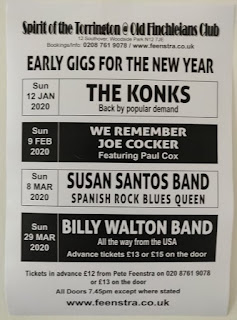 And coming up at The Arts Depot

An Indian Abroad comes to @artsdepot in one month! The one man show from comedian, performer and pro wrestling manager Pariah Khan follows a young Indian man on a gap year to Britain. Buy your ticket here: https://t.co/47MhMdkAAX pic.twitter.com/2ZrBaOlHMj