Some things are worth fighting for

I thought it might be nice for members of my family to share old pictures on Facebook, so I set up a family photo archive page and invited brothers, sisters, cousins, aunties etc to submit some old pictures. I've had a great response, with all manner of fascinating pictures. However one item, submitted by my brother Frank was of special interest. It was the letter my mother received from the RAF base commander, after he was shot down during WWII. At the time he was presumed dead. My mother was engaged to my father at the time. She was eighteen years old. My father was 26. It made me ponder the question "What is really worth dying for?" 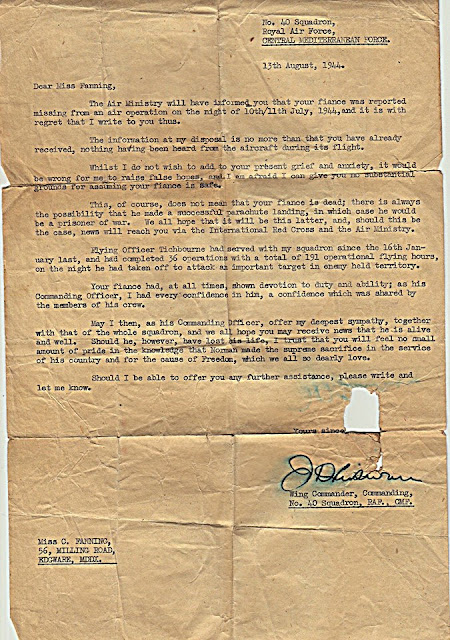 I suspect that the concept of dying for your country is not particularly in vogue in the UK at the moment. We take many things for granted and we don't particularly see ourselves as being under threat. We alll know that there are fanatics such as ISIS who would have us dead, but no one in the UK seriously sees the prospect of an IS takeover of the UK as a serious prospect. History has quite correctly been kind to Adolf Hitler and his regime. When the above letter was written, the British public were largely unaware of the depth of the depravity and evil of Hitlers regime. At that time words such as Austwitz and Belsen had not entered the dictionary as synonyms for evil. No one had heard of a schoolgirl called Anne Frank. Whilst it was recognised that the Nazis were a nasty and very anti semitic organisation, the west was generally unaware that they had turned the extermination of people of Jewish extraction into an industrial scale project. As a teenager I'd worked with a Jewish tradesman, who had been a Captain in the British Army. He'd adopted an Irish name, so that if he'd been captured, they wouldn't twig he was Jewish. He was one of the first British soldiers into Belsen and it had a devastating effect on him. He suffered a complete meltdown, stole a tank and robbed a large German bank. He was a rich man and used to sell Reichmarks to squaddies travelling to Germany, until the Deutchmark was introduced. He bought a nice house in Edgware with the profits.

He told me many tales of Belsen and had special contempt for the SS. He took great delight in telling me how he'd murdered a few of them at Belsen. He said that they claimed protection under the Geneva convention. He replied "Those people out there had no protection under the Geneva convention" and shot them. The army hushed the whole thing up and relieved him of his duties on the QT.  He said, and I didn't believe him "At some point, people will deny what happened there. If anyone ever says that, please punch them in the face from me". Whilst I am a pacifist by nature, I would have no hesitation in volunteering to fight, if we faced such a threat in the future.

But the question is deeper. What is worth fighting for? What is worth dying for? I discussed this with my father (as I am sure you probably guessed, given that I was born in 1962, he survived being shot down). My father did not buy into the "Ours is to do and die, ours is not to question why" philosophy. He said that to some extent, that was what the Nazis did and in war crimes trials the concept was rejected. My father believed that if a government was rotten or corrupt, you have a civic duty to oppose it, by force if necessary. You also have to be prepared to die, if needs be. My father as a staunch Roman Catholic and often reminded me that until the 1820's being a Roman Catholic was illegal in the UK. Three members of our family were executed by the British government for activities associated with being Catholic activists. The most famous was Chidiock Tichborne, who was executed by the state in 1586, for his role in the Babington Plot to execute Elizabeth I. Chidiock wrote the "Tichborne Elegy" a poem often read to this day at the funerals and memorial services of those executed by unjust states.

My prime of youth is but a frost of cares,
My feast of joy is but a dish of pain,
My crop of corn is but a field of tares,
And all my good is but vain hope of gain;
The day is past, and yet I saw no sun,
And now I live, and now my life is done.

My tale was heard and yet it was not told,
My fruit is fallen, and yet my leaves are green,
My youth is spent and yet I am not old,
I saw the world and yet I was not seen;
My thread is cut and yet it is not spun,
And now I live, and now my life is done.

I sought my death and found it in my womb,
I looked for life and saw it was a shade,
I trod the earth and knew it was my tomb,
And now I die, and now I was but made;
My glass is full, and now my glass is run,
And now I live, and now my life is done.


We also have Thomas Tichborne, who was executed in 1602 for being a Catholic Priest  and his brother Nicholas Tichborne, who was executed for busting Thomas from Gaol. Thomas was beatified by the Pope in 1987. For people unfamiliar with Catholic traditions, Beatification is recognition as a holy person and is often the first stage in the process of making someone a Saint. It is the way the Church formally recognises someones entry to heaven (although as a rather bad Catholic myself, I am not so sure such things can be really recognised from this realm). In short it is a way of recognising sacrifice and goodness.  On my mums side, her cousin Kevin Barry was executed for his part in the Easter Uprising in Dublin. He was only 18 at the time. He is remembered in The Ballad of Kevin Barry, which has been covered by all manner of famous artists, including Leonard Cohen.


Whether or not you agree with any of the above, I don't think you can fault their bravery and their personal sacrifice.  It seems srange to consider that in August 1944, my mother was under the impression that my Father was just the latest in a long line of family members on both sides who died fighting injustice and oppression.

Thankfully, I've never had to come anywhere near having to make such a sacrifice. Catholicism is a recognised and respected religion in the UK. Ireland has achieved independence and peace. The Nazis were destroyed. We sit back in our suburban semis and get fat drinking red wine and eating takeaways, whilst watching people we've never heard of do not very much at all on Celebrity Big Brother. It is strange to think that this is what all this sacrifice has lead us to.

As regular readers of this blog will know, I am a regular critic of the local council and the government. In my comfy armchair, I try and make a difference. On occasion I stir from this position, to participate in the odd march or to visit the Town Hall and try and make the council see sense. I even volunteer to help the homeless, which involves the hardship of getting up an hour earlier than normal every Thursday and getting a train to Victoria.

Which leads me to wonder, am I personally doing enough to address the injustice in our society? There is no prospect that any of my chosen causes would lead to me being hung, drawn and quartered, as Chidiock was. It is strange to think that someone was to successfully assasinate Queen Elizabeth (something I would never dream of doing or even suggesting, as I quite like the old dear and unlike some I don't believe in violence, especially against women), they would simply be locked up for a very long time, although I suspect that sooner or later a cellmate would inflict some sort of justice not allowed by our legal system.  It is strange to think that there are people in our society who would see such an action towards the Queen to be a victory.

There are plenty of things worth fighting for today. I'd put protecting the NHS from cuts as top of the list. Next would be protecting services for the Children, The Elderly and The Disabled. Then I believe our culture should be protected. This means museums, libraries, theatres, cinemas and pubs. Interestingly, I was listening to the Jo Good show on BBC London yesterday. She mentioned that the London Gay Club and Pub scene is under threat. It seems that with the advent of internet dating, people are not bothering to go out to meet each other. They simply hook up and stay in. It hadn't occurred to me that this could be another reason for the demise of our culture. Is it really true that the Internet is keeping us so busy bonking that we have forgotten other ways of enjoying ourselves.

When it comes down to it, we are lucky. We have a great society and a great country, built on huge sacrifice. We don't have to take personal risks to preserve it, just be a bit less lazy. Some things really are worth fighting for. Fortunately most of the things we need to fight for, don't need the ultimate sacrifice. My Dad and his comrades saw to that!