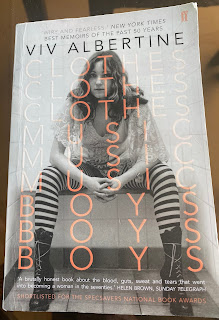 I don't read a too many books. Being frantically busy, being dyslexic and writing this blog make it difficult. But when I go on holiday, I always take time out to read. As someone who writes, it is something I should do a bit more of. In truth, most of the books I read I find a bit uninspiring and dull, that's why this review is almost unique. That doesn't mean I don't enjoy them, but most books, especially biographies and autobiographies, I can almost taste the things that are left out. It is human nature to put a nice spin on ourselves, to leave out the bits that are interesting and give a true insight into the character of the author. I've given up reading biographies that are not autobiographies. The last one of these I read was Mick Rock's book about Lou Reed. I realised I have no interest in a chronological list of events, through the eyes of someone else.

I've read all manner of autobiographies. Until I read this book, I'd say the best were the ones by John Lydon and footballer Paul McGrath. Lydons fascinated me, as he was raised in North London and the early chapters have many echoes of the lives of myself and my friends. Like Lydon, I was raised in a North London Catholic family and attended schools run by nuns. Although there were not that many parallels in some ways, I got the sense of alienation and being an outsider. Lydon's life was changed by meningitis, mine blighted by dyslexia. I felt a kinship with Lydon, even though I'd never met him. I sort of thought that it would be hard to feel the same about another artists autobiography.

A while back, I was listening to the Jo Good show on BBC Radio London. Viv Albertine, former guitarist of punk band, The Slits was on. I can't remember what she was talking about, but Jo happened to mention that her autobiography was brilliant. I mentioned to Clare that I'd quite like to read it. She bought it for my birthday back in August. It went onto the shelf awaiting a holiday. We finally made it away to Madeira last week. I finally had time on my hands. I brought two books, Patti Smith and Viv Albertine. I decided to read Viv's first. In all honesty, Patti Smith was perhaps a character I was far more interested in. I saw the Slits a few times back in the day. I loved the attitude, but didn't quite get their music. It was a bit too out there for me. I wanted my punk to sound like The Damned, The Pistols and The Ramones. I liked what the Slits did, but they were simply one of many bands I found interesting, without being really into it. I felt what Smith, The Slits and Poly Styrene did was massively important. They were female artists who weren't trading on selling phoney sexuality. The punk era was perhaps the only era where female artists could truly express themselves. I was proud that I was part of a movement where Poly Styrene could release a single such as 'Oh Bondage Up Yours'.

When I first heard 'grapevine' by The Slits I was a bit bemused. I couldn't really understand why they'd done a cover. I liked the song, but it just felt a bit wrong. As a 16 year old punk, I was hellishly judgemental and it just felt like totally alien to me. Over the intervening 40 years, I've softened my views and I came to realise how good their material was and how interesting Grapevine was. Given Jo Good's comments about the biography, I thought it would be a fun read. I thought that there would be some good stories about the early days of punk. I thought it might be a bit lighter than the Patti Smith book, so a better start to the holiday. What I got, I was not expecting at all. The first chapter is entitled "Masturbation". The first two sentences are "Never did it. Never wanted to". That got my attention. The book didn't lose my attention until the last sentence "I still believe in love".

The early recollections of life in Muswell Hill were interesting. I love recollections of London in the 1960's and '70's through the eyes of people who lived it. I couldn't really associate with many of the tales of family life, my upbringing was a bit different, but the tales of school, youth clubs etc was a poignant reminder of a very different world. Viv talks of two scallies turning up at her Catholic primary school and how they were paraded on stage at assembly. The Catholic sense of inverse superiority "We'll take anyone!" It reminded me of St Vincents, who would take anyone and do their best to make their lives as miserable as possible. The discovery of music through records listened to at friends homes was another theme that I got. I'm younger than Viv, but her discovery of the Beatles reminded me of my own sister taking me around to her friend Linda Finlays, to listen to the world premier of Penny Lane on the Radio. I can remember the debate was to whether it was up to scratch. I seem to recall my sister being disappointed that it wasn't a love song and was a bit strange. A couple of years later she discovered the joys of smoking pot and changed her mind. It all came back.

Then there was the story of Viv trying to get a band together. The Flowers of Romance with Sid Vicious. It brought back the early days of the False Dots. My empathy with Viv started to get stronger at this point. I realised that in many ways, her relationship with Sid was like the one I had with the co founder of the Dots, Pete Conway. The dynamic was similar. Out there characters, who we'd never have started anything without, but who disappeared before anything really happened,  Mercurial figures who leave carnage wherever they went, but out of the ashes the Phoenix grew. The recollection of early band meetings, discussions about the band name. Then there was the relationship with other bands. The Slits were getting it together as bands like The Clash and The Pistols were getting deals. These bands were their friends, so there was a great mutual support network. Anyone who has been in a band, where there is a scene will recognise this.

For the Slits, the fact that they were a female band was both a blessing and a curse. I had imagined that they'd been far less likely to be on the receiving end of violence in the skirmishes between Teds and Punks (whatever happened to the Teds?). Viv put that misconception to bed. Ari Up was stabbed twice. Who stabs a 15 year old girl for her tribal affiliations. I'd actually forgotten how bad things were. Was there something in the water then that made us all violent psycho's? Of course we have gangs and drugs and guns, far worse than then, but the concept of getting stabbed for wearing the wrong dress? Any trip into the centre of town was running a gauntlet of fear. Get on the tube and you'd suddenly find a gang of skinheads getting on at the next stop and you'd get a good kicking. I suppressed those memories. I always figured that it was the price for living at the centre of the musical multiverse. Viv alluded to that as well.

Then there is the sex. Viv talks about how naïve we all were. Fumbling, snogging, cheating, betrayal. She talks about how Steve Jones and Joe Strummer tried it on with her, even though she was Mick Jones girlfriend. I'd forgotten how loose morals were a central part of the punk ethos. Doorways in Soho and telephone boxes were the places where liaisons took place. There and the loos at seedy clubs. It was almost imperative that you had your wicked way with the girlfriends of your rival bands members. This was something that seemed important. That and 'not wanting to be in a relationship'. Viv talks about how challenging it was when she realised she was in a relationship with someone she loved.

The chapters on the collapse of the band are also fascinating. The way that in a few months the gang can fall apart and fragment. You end up hating each other, whereas six months earlier you'd been inseparable. Then the feeling of emptiness when its over and you realise that it ain't coming back.

The second volume of the book is perhaps even more interesting. Usually the early years in Rock biogs is the good bit, then it gets dull. But Viv's battle with cancer, her challenges with motherhood and the suppression of her art is something that rings true. The need to compromise in a relationship where there are kids. Also the bitter alienation of being in a relationship with someone who doesn't really get why you need to do the things you do. I guess I am a bit luckier than Viv in that respect, but I find it challenging that people do not understand what you are doing.

The insights Viv gives as a human being are brutally honest and insightful. I've been working on my own autobiography and Viv's book has made me realise I need to reassess certain aspects and be a bit more honest. The hardest bits in Viv's book are the bits that make it compelling. The observations such as "One day, when a friend asks who I would like to be able to sing like and I answer 'Karen Carpenter,' husband guffaws with derision, spraying a mouthful of coffee across the table", you feel the pain.

These observations are insights not just into Viv's life but into the human condition. A relationship where one party doesn't realise the hurt that such a comment could inflict. The dismissal of ones complete identity.

If you don't know The Slits music, have a listen. If you want a great read, buy the book.