The Friday Joke - The Library 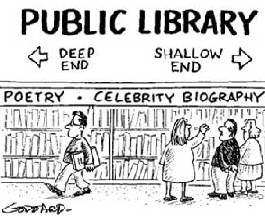 Writing a blog requires a hell of a lot of research. Often I will go to the library, look through the reference section, looking for inspiration for the pieces I write. I bumped into an elderly friend last Thursday as I was entering. He seemed rather upset. The chap is an Irishman in his late 80's, I've known him for a very long time. I suggested we go for a cup of tea at one of the nearby cafes. He told a tale of woe. He told me that with the lockdown, he lost several friends, hadn't seen most for ages, many are self isolating. He hasn't been able to work and so is skint. He can't even go to mass as that requires online booking and he can't use a computer. I asked him what he was doing in the library, and he said that he was trying to borrow a book on how to commit suicide. I was really worried. I asked what happened. He told me that they couldn't lend it to him, because the last bloke hadn't brought it back.

I was horrified, but then he said "actually I was caught short on my morning walk and I had to use the loo". He was rather cheered up that I'd fallen for his rather alarming gag. Having reassured me that he wasn't actually suicidal, I made my way. I gave him a bell later to check he was ok and was more reassured when he told me another rather bad joke. There are lots of people in a similar position, living alone, cut off from social networks. If I hadn't bumped into him, I'd not have even thought about it. Take a minute to check up on elderly friends and relatives. Meet them and have a coffee if they are lonely. My friend told me that if goes on like this much longer, it he really might be borrowing that book. I'm not entirely sure he was joking.