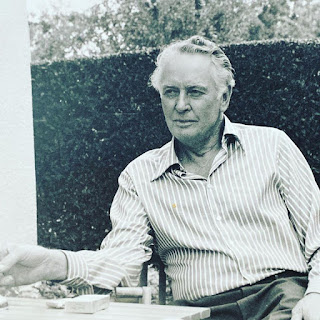 I've been thinking a lot about my Dad this week, for no particulr reason. He passed away in 1987, but I still feel his presence around me and his hand on my shoulder when I need reassurance. He was a larger than life figure, an ex RAF Pilot and Officer, who'd flown Wellington bombers, been shot down in Rumania, held prisoner of war, escaped, made it back to the UK, married my mum, had six kids (of which I was the last). He seemed indestructable, so his death at age 69 was a massive shock. It had never really occurred to me that he wasn't immortal. He'd sailed through life, always lucky, always prepared to take chances. But he had a wisdom that I only really fully understand now, after I've had children of my own. I used to clash terribly with him. He had a fierce temper, which I now recognise was probably due to PTSD from his wartime experiences. We are both strong personalities and neither of us back down easily, so once I became a teenager, our relationship was extremely tempestuous.

But both of us would woak through the very gates of Hell for each other. I just regret that we didn't really have long enough together as adults to properly appreciate each other. The year before he died, he came to see my Band play at The Grahame Park festival. As he watched us play and saw the crowds dancing, he told me he'd had a revealation and realised that music was something I took seriously and was good at. He apologised for not taking me seriously. I'd just assumed that as he was from a very different generation, he hadn't really got it. He told me that he'd realised I was following my star and that I that was the best thing anyone could do. He said that the world is full of people who say 'I could have been...". He told me that it was the same thing with him and the RAF. He wanted to fly. It was an opportunity and though it was a deadly game, it was where his star was. I was thinking about this and I started thinking about the advice he gave me. I thought I'd collate it here

1. Never show your cards. He told me that in life, in business, in anything, always keep your cards close to your chest and only play them when you need to. He said that shouting about how clever you are only makes people think you are an idiot.

2. He told me that England was a civilised country so you should never carry a weapon, as it makes you more at risk. He said that if you are going to carry a weapon, then you should only do so because you absolutely need to and you are 100% prepared to use it and that situation should  never occur in London. He also said that if you use a weapon, the consequences for you are likely to be worse than if you'd not had one in the first place.

3. When I was fourteen, I lacked a lot of self confidence. He took me to one side and said that if I wanted a girlfriend, I'd do better to get a job as girls want  you to treat them. I got three jobs. He said that any woman worth dating would never want a tightwad.

4. He told me that if I was taking a girl out on a date, never order spaghetti as it makes a terrible mess and you slurp when you eat it, which would put off any decent girl.

5. He told me that when you are serious about a girl, look at her mother as if you marry her, that is who you'll be married to in 30 years time.

6.  He told me to always stay on the right side of God, as when you really need God, you don't want to be atoning for your sins. He told me that when his bomber was being shot down and about to crash, he was never scared as he knew he was right with God. He told me this was why he was always lucky. At the time, I dismissed this as mumbo jumbo, but I've come to realise he was 100% right. That is why I've inherited his luck.

7. Never trust a man who doesn't buy his round in the pub. My Dad absolutely despised tightwads and round dodgers. He was generally kind, but he'd make an exception for those that didn't stand their round,

8.  Don't be surprised when a scorpion stings you. My Dad believed that people have a character that is them. If they are malicious, they will always be malicious. They may be nice to you at times, but that is only so they can sting you harder.

9.  Build a team you can trust. My Dad had been through the war with the crew of his Wellington. About half way through the tour, he found that one member of the crew was not trusted by the rest of them. He took the difficult decision to replace him. He told me that this was the best decision he'd made. He said that if you can't trust people your life depends on, then you are unlikely to come through. Having learned the lesson, he took it with him throughout his subsequent career.

10. Let the past go. The past is done. The lessons are there to learn, but you can't change what has happened. Move on.