The Saturday List #316 - The top ten toys I wanted as a kid, but never got

I loved my Mum to death, but she was what you might call a bit of a skinflint when it came to Birthday and Xmas presents. Whatever you asked for, she'd either go to Woolworths or Burnt Oak market and by a crappy, shoddy alternative. My Dad was the opposite, but as he worked every hour God sent, he'd rarely buy anything. A few notable exceptions were when he bought me the Corgi Rockets set with a super turbo charger. That was the best present ever. Mind you, he played with it almost as much as I did, as it was brilliant. 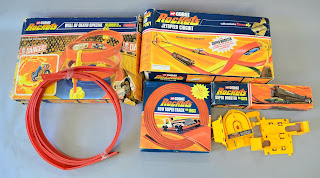 But this blog is not about that. It is about the ones that got away. The pattern was pretty similar. We'd see a commercial on TV, the item would look brilliant. I'd nag my parents for six months to buy it and hey presto. Christmas would come and I'd get something with a slightly vague similarity to it. 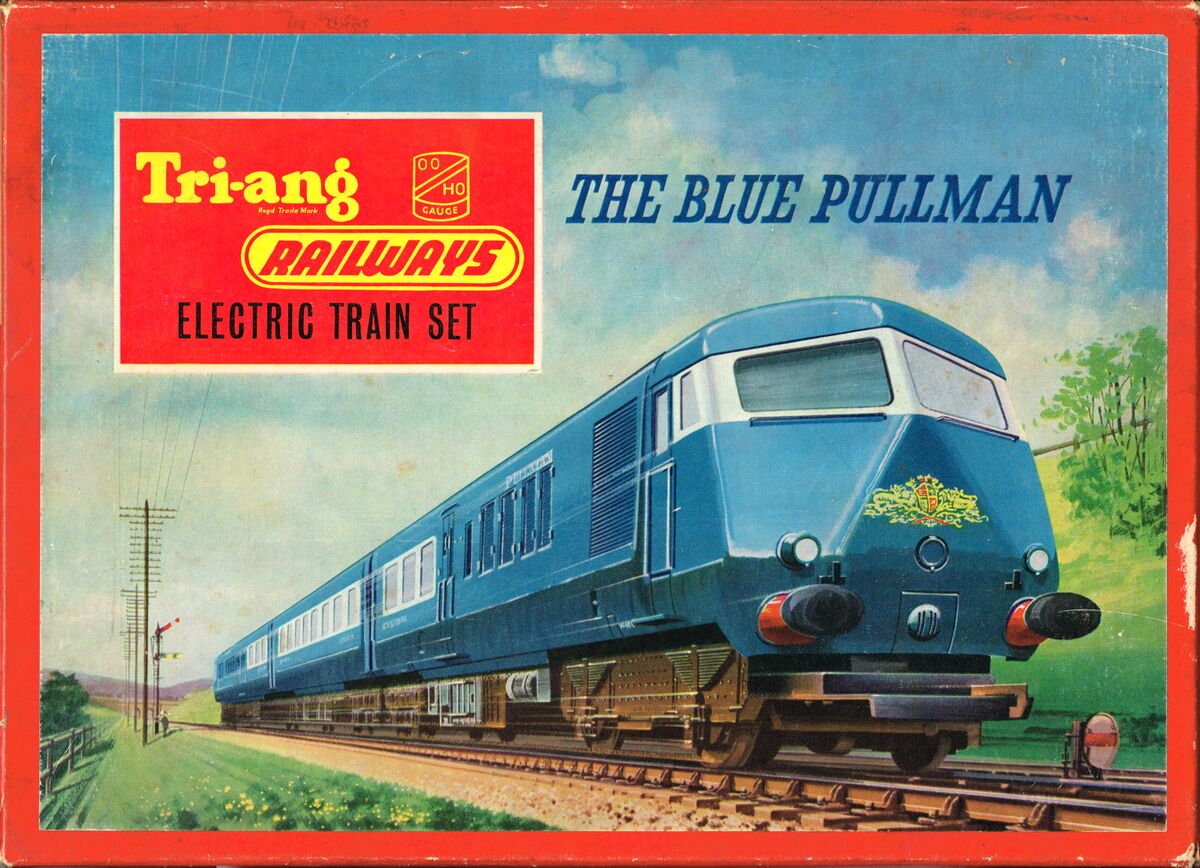 1. The Triang Midland Blue Pullman set. This was something I always wanted as a kid. This train would go from St Pancras to Manchester and pass by our house. All of the other trains were either green or maroon and looked a bit crap, but this was blue and looked super modern and fast. I wasn't really interested in steam engines. I preferred modern looking things (I still do). One year, after much nagging when I was about six, my mum started dropping hints that I'd be very happy on Xmas day. I awoke early and very excited. She'd bought a second hand train set at a jumble sale. It had a steam engine. She'd missed the point and not listened at all. I think that was the moment it finally dawned on me that life would never work out quite how I wanted. 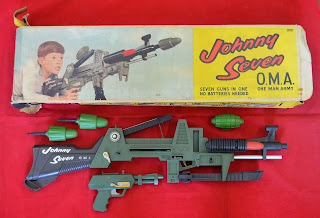 2. The Johnny Seven gun. Every boy I knew wanted one of these. Most of my friends got one. But my mum categorically laid down the law that she would not tolerate guns as guns kill people. She beleived that I'd turn into a psychopath if I played with toy guns. What especially irritated me was that my brothers had air rifles. She informed me that they'd bought them with their own money, but if she had her way, they would be in the bin. 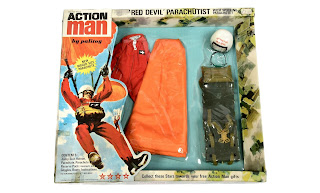 3. The Parachuting Action Man. Action man was perhaps the most popular toy for my generation and the Holy Grail was the parachuting action man. All I got was the cheap knock off version from Woolworths, and without a parachute. I saved up my pocket money for months and we finally went down to Hamleys to buy it. Guess what? They were out of stock. I bought an Arctic Action man instead, mostly because I liked his dog. It wasn't the same. By the time we had some decent ice to test the sledge, I'd lost interest in it. 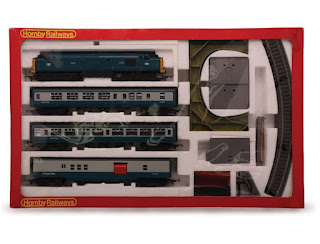 4. The Royal Mail Train Set. This was one of those toys that you saw on telly and just wanted. The train would go around in circles, but it would collect mail bags as it went past. It looked really exciting. Sadly around the time this was my dream present, my Mum was sick with cancer and the family was a bit skint and in disarray. I think we got a tangerine and a bar of chocolate for Xmas. My cousins got this. I went around to their house to play with them on Boxing day, whilst my Dad got pickled with my Uncle Jim on his home brew. It was actually a bit crap, nowhere near as exciting as on Telly, so I wasn't quite as gutted as I had been. 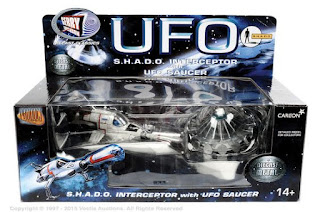 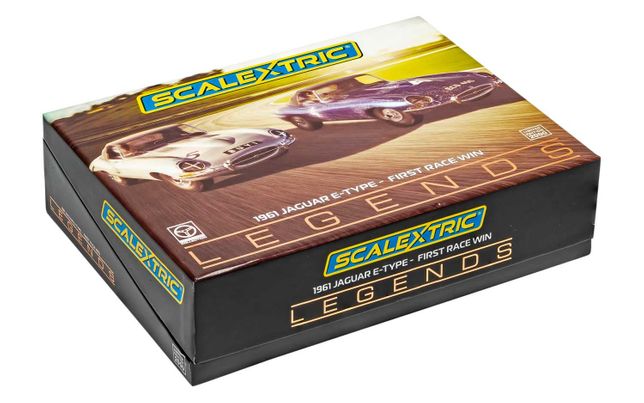 6. E Type Jaguar Scalextrix Set.  The E Type Jag was always my favourite car. I saw an E Type Jag Scalextrix set in Hamleys and wanted one. What I got was Burnt Oak Market knock off that didn't work and didn't have E Type Jags.  I sometimes wondered what my Mum thought I'd think of such rubbish. 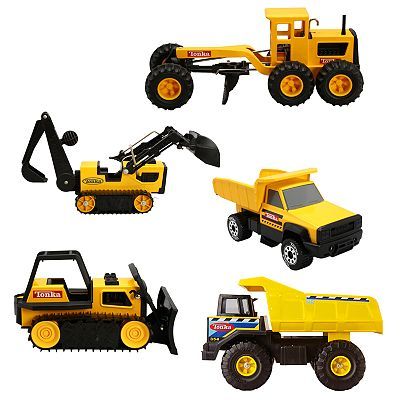 7. Tonka Digger. I remember vividly the first Tonka advert on TV. The next day the playground at St Vincents was full of it. These toys were like Captain Scarlett. They were indestructable. We were fascinated. Needless to say the knock of my Mum got down in Burnt Oak Market was anything but indestructable. My humiliation was complete when everyone else in the street got real ones for Xmas.

8. The Chemistry Set. There was a period when these were all the rage. All manner of exciting things could be done. Explosions, smells, bangs. I desperately wanted one. I persuaded my mum that it would help my studies. She of course bought the cheapest one she could. It had three chemicals that did the square root of nothing. All I can remember was that there was Copper Sulphate that was meant to do something interesting. It put me off chemistry for life. As I recall, my mate Luke from next door got a decent one and actually managed to make some smells and bangs. 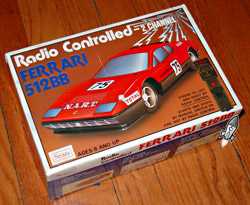 9. At some point in the early 1970's we started to see radio controlled toy cars. Of course I wanted the Ferrari. What did I get? I got a crap Ford Escort from Burnt Oak Market, which was controlled by a long wire. It was crapness incarnate. 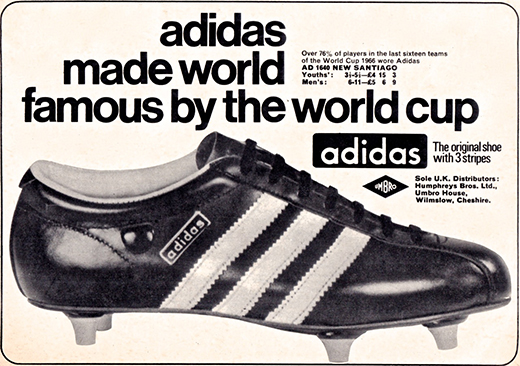 10. Addidas World Cup football boots. I've always loved football boots. Addidas boots had three stripes and the TV Commercial implied that if you wore them, you'd be transformed into a footballer with the skills of George Best. Of course my mum bought me Winfield boots, with two stripes, that transformed me into Tony Adams less skillfull brother. If only she'd bought me those Addidas boots, maybe I'd have scored the Equaliser when Maradona scored his Hand of God goal and England would have gone on to win the World Cup.

What is the toy you most wanted but never got?

Cue here for the Yorkshireman's reply: -