Corona Virus - Read this article - it might just save your life

Note: This article was written in February 2020. Since then, some of the advice has changed, so I have edited it so that anyone finding the advice does not get mislead.

We have now seen cases of the Corona virus locally. Whilst there has been plenty of coverage of the virus, many people are very unsure of the risks and the best way of preventing it. There have also been wild claims, none of which are based on science or even common sense. So here is a summary of all the information you need to know.

How dangerous is the Corona virus.

The current estimate is that the Corona virus currently has an estimated 2% 1.4% mortality rate.  This may well be an overestimate as many may have contracted the virus and have not presented symptoms. This is also likely to drop as the virus and its treatment is better understood. Generally flu strains have a mortality rate of around 1%.

Who is most at risk

For healthy people with a working immune system, the risk to life from Corona virus appears to be low. That does not mean you will not get flu like symptoms and feel rotten, but you should be able to shale it off after a few days. However, if you are elderly or have a compromised immune system (for instance if you've been undergoing chemotherapy), then your risk levels will be heightened.(Young children are also more vulnerable as their immune systems are not fully developed This statement turned out to be incorrect, children seem to be most unlikely to contract the disease). If you have contracted the virus, be mindful of this.

Common signs of infection include respiratory symptoms, fever, cough, shortness of breath and breathing difficulties, Loss of taste and smell is another marker.

What should you do if you think you have contracted the Corona virus?

The advice from the NHS is to call 111. Do not go to the Doctor or A&E. If you live alone and don't have two weeks food in the cupboard (the advised isolation period), then you will need advice from the 111 service as to how you can get supplies without putting others at risk. As with any virus, it is important to remain hydrated and keep warm. I'd recommend reading the NHS guidelines fully when you have finished this blog https://www.gov.uk/guidance/wuhan-novel-coronavirus-information-for-the-public 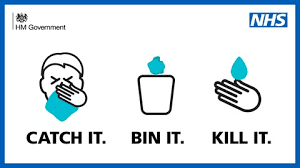 The NHS has given guideance. The most likely way of catching the virus is through contact on your hands. Someone coughs on their hand emitting active virus, they touch a doorknob, handrail or escalator rail and then you touch the same thing with your hand and rub your eye or pick your teeth.

The message is that if you've touched anything which may have come into contact with the virus, then you need to take precautions. You also need to think of other people, which is why these are the most effective measures.

Is the government managing the crisis properly?

The honest answer is that it probably far too early to say, as there are always lessons to learn, but probably yes. The UK has a very well developed health service and is one of the best equipped to deal with pandemics. That doesn't mean that there are not lessons to learn or things that could be done better. It has been suggested that the Mayor of London and the government should ensure that all public spaces, such as rail/tube stations and other such places have antiviral hand gels  available and promenent signage informing the public to use it. If any of the information in this blog has been useful and it's the first time you've heard it, then that would seem to imply that they are not getting the message across.

(Note - It is now clear that the UK has had one of the most ineffective responses of a developed economy. It is probably too early to fully list the problems with the response, but having the highest number of deaths in Europe is clearly a massive failure by the government)

This blog has seen some wild claims on the internet, stating that the virus was manufactured and part of a conspiracy to kill off those people who are 'economically ineffective'. For this to be true, the US, UK, EU, China, etc would all have to be part of the conspiracy and tens of thousands of people would have to be complicit. As humans live ever closer to each other and travel becomes easier and cheaper, we will constantly get exposed to new diseases from remote regions that would previously remain localised. Back in the 1970's, when I was studying A Level Biology, I worked for a couple of weeks at the National Institute for Medical Research. My role was as a lab porter in the immunology department. I recall a conversation with one of the professors over lunch as to whether the government would ever manufacture a doomsday virus to kill off people deemed surplus to the countries requirements. His response was very interesting. He pointed out that the effects of such a scheme would be completely unmanageable. The chaotic nature of how diseases infect a population would be unmanageable. It would be impossible to manufacture and distribute vaccines on a scale large enough to protect the elite without the general population getting tipped off.

He informed me, rather jokingly,  that if there ever was such a conspiracy, the virus would have a three day incubation period, followed by a two day asymptomatic infectious periood and a four day duration of illness for normal people. It would be sprayed at football matches and tube stations four days before Xmas. The logic being that Xmas is the time of year with least economic activity,  when people see their grannies around etc and when people have full larders, so the damage to the economy would be minimised.  It appears that the Corona virus does not meet any of these patterns. He pointed out that the people who such a scheme are likely to target are those least likely to be on the tube or at football matches, so it would be very difficult to make such a scheme work, unless you sprayed old folks homes, and that would be very difficult to get away with.

As doctors by definition care about public health, they would not play ball. Most people would not put their own grannies, babies and friends at risk. That doesn't mean people won't speculate, but it seems extremely unlikely.

Email ThisBlogThis!Share to TwitterShare to FacebookShare to Pinterest
Click on Labels for related posts: Corona Virus, What you need to know about the Corona virus