Today we start our analysis of the Draft Barnet Council Local Plan.  The full details of the consultation are on the Barnet Council website. We urge you to get involved and read this. This document will shape the way our community develops over the next 20 years.

As this is a huge document, I have decided to approach it in bit sized chunks. As someone who has spent my life working in the music industry, and who is involved in the three local music festivals, I make no apology for starting with the Night Time Economy. When I opened the document I was pleased to see that this was being addressed. When I saw what was being proposed as a policy, I was absolutely dismayed. The policy is as follows: 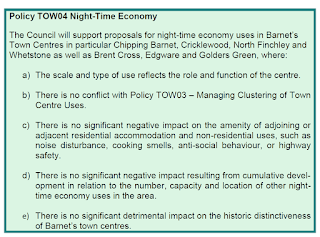 That is it in its entirety.  The local Policy is called TOW04. It is not a policy, it is a vague set of very negative aspirations, none of which offer any way forward for using the night time economy in Barnet to build wealth, encourage entrepreneurs to open businesses, seek local engagement, or improve quality of life in Barnet.

The policy is one totally based on negatives, telling people what they can't do at night, telling us what sort of night time economy is'not allowed here'. Let me make it plain that this is not bashing the administration because they are Conservatives. I am happy to publicly state that the council which has shown the most vision in recent years with regard to the Night Time economy is Conservative Westminster City Council, which has recognised the role of venues. They recently made an absolutely ground breaking decision to save  the 100 Club, by waiving all business rates. Westminster recognised that having a world class music venue, with a legendary reputation, is an asset and generates wealth and prosperity. It gives a lift to local restaurants and pubs. It helps make Oxford St a destination venue.

The Conservative government has also recognised this with rates relief for grassroots pubs and music venues. Town Centre regeneration experts recognise the role of local festivals and arts events in a thriving community. The London Borough of Barnet has some world class venues for arts. The Arts Depot in North Finchley is one, The Bull Theatre in Barnet is a superb small venue, and we have amazing cinemas such as The Phoenix and The Everyman in Barnet. We also have whole swathe of small pub venues, some of which are under threat, such as the Midland Hotel in Hendon. Interestingly local Tory councillors have been supportive of the campaign, but this hasn't translated into a coherent plan.

As regular readers of this blog will realise, I run a major music studio in Mill Hill. We are not a public venue, however we play a key role in the local night economy, as we provide the support services for much of the music related activity. We are a major generator of local wealth, the related businesses have a turnover of around half a million pounds and we conservatively estimate that we generate between £10-30 million a year in economic activity by our presence. This is based on income received by artists from recordings made at our studios, rehearsals for gigs, associated companies (Jumpup Ballet School, Studio Forcada Violin School), economic activity related to music festivals we support. Due to our presence, musicians are keen to live locally. I doubt that there are more than a dozen other businesses in the Borough that generate a similar impact. All of our income is reliant on a thriving UK nigh time economy. It is almost perverse that the local authority is seemingly unaware of this.

I am not an expert in other sectors of the night economy, such as the pub and restaurant trade, but these make a huge contribution to our local quality of life. The Borough has some amazing and very successful restaurants. The Good Earth in Mill Hill and Haven in Whetstone spring to mind. People travel  for miles to eat at these places and they are packed every night. The fact that Colindale, with the Bang Bang Oriental centre, a massive cultural hot spot, is not even mentioned is an indication of how out of touch our council planners are.  The fact that there is no recognition of the role of the night economy and no attempt to build on this is quite worrying. There should be a serious attempt to encourage start up food businesses in High Streets.  This would encourage an entrepreneurial  mindset and would make our community more desirable.

As to the role of pubs. The Chandos Arms in Colindale is a shining example of how a pub can help build community. Six years ago, the pub was on its last legs, avoided by all but hardened locals. A vibrant new team lead by Emily and Are Kollviet took over. They brought good food, a pleasant environment and live music to the pub. They have actively supported the local community and foodbank and the pub is now thriving, winning award after award. A council that understood the need for community and the role a night economy plays in this, would recognise this in the local plan and make the protection and development of such community based pubs a priority. A local plan that promotes good, well run pubs  and recognises their contribution should be the cornerstone of a "Night Time Economy" plan.

So what should be in the plan?

1. The plan should adopt agent of change principles as a cornerstone. For those unaware of the meaning of this term, it means that if you move in next to an established business that causes a degree of disturbance such as , a restaurant that emits a degree of odour, a a pub with locals leaving, or a music venue, because the venue is established, you have no right to force changes to the business. This does not mean that if people are smoking crack and having sex in your stairwell, as a result of a badly run establishment, you have no recourse at all. It just means that anything that is accepted as part of being the neighbour of such a business is part of the deal when you buy the property and you can't take legal action to force the business to change what it has been doing for years or decades.

2. Special protection for important Barnet night time venues from redevelopment. This should take two forms. The first should grant important venues the same protection as listed buildings. The second is that where large infrastructure projects destroy venues, the venue should be resited elsewhere in equivalent or better premises at zero cost to the operator, and this should occur before the development starts, not a few years later, when all goodwill and reputation has been lost.

3. As night time industries are a key component to a great quality of life in Barnet,  tax breaks, planning assistance and grants should be made available to companies or individuals investing in infrastructure to support night time industries. This should be done with a view to ensuring the the London Borough of Barnet  establishes itself as having a thriving night time economy that is safe and business friendly.

4. Offer mentoring and assistance to young people wishing to set up SME’s focusing on the creative sector, working with successful local businesses operating in the night time economy to provide support for young entrepreneurs, possibly in association with organisations such as the Federation of Small Business.

5. Require businesses applying for grants, etc to help open night time economy related businesses, to present plans  at local area forums and engage with the local authority, so that local people have a real say in developing their high streets.

Please email the council at forward.planning@barnet.gov.uk to make your views known.