Five random 'What if' questions about the Borough of Barnet

What if? That is a question I often ask. There are five questions which I've often asked myself about the Borough of Barnet. What if things had been different. What if sense had prevailed. I wonder what you think about these questions.

1. What if the railway between Mill Hill East and Edgware had been converted to a tube line instead of being closed? 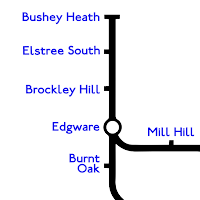 The History
Back in the 1930's, there was an ambitious plan by London Transport to extend the tube from Finchley Central to Edgware. The plan was to convert the existing LNER railway to a tube line. Due to world war II, the plan was scrapped. Only Mill Hill East got a tube service. The railway was used for BR freight services until 1964 and then the tracks pulled up. The building  of the M1 ended any chance of the decision being reversed.

The What if?
Just suppose that it had been completed. We would now have a direct tube service to the Allianz Park stadium. Getting from Edgware to Finchley central would take ten minuites and be on an electric tube train. There would be a direct interchange between the Thameslink service and the Northern Line at Mill Hill. Think how many fewer car journeys and how much less CO2 we'd have produced. Of all the acts of infrastructure vandalism in London, this is one of the worst.


2. What if Andrew Dismore had lived up to his word and saved Edgware General Hospital?

The History.
John Major's government announced that it was planning to close Edgware General hospital in the mid 1990's. The then local Tory MP for Hendon North, Sir John Gorst vowed to fight the closure. He voted against the government. In 1997, Labours Andrew Dismore was swept to power on a platform of saving the hospital. As soon as he was elected,  this was completely forgotten. In 2009, I wrote to Dismore saying I was thinking of quitting the Labour Party. He invited me in for a chat. I told him, amongst other things, that the reason it was closed was because it didn't have a large enough catchment area to maintain a general hospital with an A&E. I asked if he knew how people from Burnt Oak, Colindale and Mill Hill were supposed to get to Barnet General by public transport. He shrugged and said that I had to live in the real world. I quit the next day, feeling I'd been completely duped in supporting him and helping him get elected in 1997, when it was clear he had no intention of saving the hospital.

The What if?
So now the population of Colindale has doubled in size since the closure and is set for even more development. Mill Hill is similarly lined up for several more mega projects. Edgware is also in the developers crosshairs. If Dismore had been true to his word, would Edgware General still lack the catchment to be 'viable'? Anyone who has used Barnet general in recent years knows it is totally overrun at busy times. When my wife broker her arm 18 months ago, we were told there was a five hour wait. As she was deemed critical, she jumped the queue, but no fracture specialist was on duty (it was 11pm) so she was sent home with pain killers and told to come back the next day. Would we be subjected to such awful service if we had another A&E at Edgware, or would there be adequate capacity.

3. What if Barnet Council had allowed Barnet FC to move to Copthall stadium in 2006?

The History.
In the mid 2000's, Barnet FC realised that if they wanted  to develop, they needed a new home. They wanted to stay in the Borough. Copthall was their ground of choice. The stadium was dilapidated and they offered regeneration. The Conservative Council was deeply anti Association Football, so refused. Barnet moved to The Hive in Harrow. It is only a matter of time before they cut the last tie and change their name.

The What if?
What if Barnet had moved to Copthall? There would be no £22 million loan, a huge swathe of Barnet fans who left the club when the club left the Borough would have remained. Saracens would never have moved in. We would probably have a third or fourth tier association Football club getting 5-6,000 fans a twenty times a season, rather than the now disgraced European Rugby champions and a huge civic debt. What would have been better for Barnet?

(Ed note - When researching this article, I was appalled to see that the Barnet Copthall Wikipedia page completely erases the history of the stadium prior to the arrival of Rugby. I will be writing a seperate article on this)

4. What if the M1 had never been built through Mill Hill and Hendon?

The History.
In the early 1960's, the then Tory Transport Minister Ernest Marples passed plans to extend the M1 Motorway from Watford to Staples Corner. Once it passed the Green Belt at Scratchwoods, the path followed the Midland Mainline, mainly being built on disused rail sidings, goods yards etc. The original plan was to continue it all the way into London. There is still the remnants of the plan at the end of the road in Staples Corner. Marples used his own company, Marples Ridgway to build the road.

The What if?
The concept of a Mill Hill without the M1 fascinates me. It is at the bottom of my garden. Just suppose that we'd become aware of Climate change in 1955 instead of 2015? Just suppose large urban roads weren't built and we'd gone for better public transport? Would the disused rail yards have been used for better public transport? More capacity? Or would I have a housing estate at the bottom of the garden instead of a road. We'd certainly have less noise and less pollution in Mill Hill. It would be a far nicer place. The stretch of the M1 from Staples Corner to the M25 is comparatively lightly used, compared to the section north of the M25. I think that the M1 linking with the A406 is probably a sensible junction, but if we had a joined up transport strategy, I am sure we'd have had a better scheme. A friend of mine, who is a transport planner, has long argued that the M1 should have ended at Scratchwoods, with a rail  station interchange and links to the A1. His view was that the High Barnet Branch of the Northern line could have been extended, or the Mill Hill East line, giving a rail and tube hub. He also thought Victoria Coach station should be relocated there, with free tickets to the hub for all coach travellers to/from central London. It  always sounded to me like a brilliant scheme. But we don't do joined up thinking in the UK.

5. What if Hendon Aerodrome had remained open?

The History.
By the 1960's, Hendon Aerodrome was used as an RAF base. It was not fit for purpose, having to short a runway and being set in an urban setting. There was a big requirement for Council housing, so it was redesignated as a site for GLC built council housing, sadly constructed to a very poor standard.

The What if?
Just suppose that instead of the closing the site, it had been transformed into an urban airport? The use of such short runways for urban airports has become quite common. City Airport is one such example.  Hendon would have been an excellent location, far more convenient than City Airport with a mainline rail service and a Tube line passing by. With the Thameslink service, this would doubtless be a very popular airport for short haul travellers. I am not sure that locals would have liked an airport on their doorstep, but given that it was already their and the aviation industry was well established in Colindale, it would not be something new. As much of Grahame Park has had to be rebuilt and the development has been criticised from the moment it opened, it is an interesting thought.

Of course the opportunities all of these 'What if's' threw up are long gone. For me, it is just an interesting game  speculating. But there are lessons to be learned. The main one is that when you destroy infrastructure, it is almost impossible to fix the problems that you create. The overcrowding at Barnet General is a prime example, as is the chronic local traffic that better public transport would create. As for the lack of an airport in Colindale. I think on balance, that is probably a good thing, but I'd love to know if anyone ever thought of it. The regeneration of St Pancras shows just what we can do when we use our imaginations. Who would have thought, when BR wanted to demolish it for being 'outdated' in the 1960's, that it would become such an amazing home for Eurostar and driven the whole Kings Cross Regeneration.

Once we erase the past, it is gone. That is why I help talented people make films like this