Great day 4 a drive to 1 of my fav pubs in Mill Hill today, & checking the grave of Billy Fury on the way. pic.twitter.com/GvfmeUUvqh
— Denis H (@JoeMeekSociety) January 15, 2016

It's 1973, and Mill Hill Broadway gets its first purpose built supermarket, in the form of Budgens. Radio and TV personality Terry Wogan was there to open it. (1/4) @DiscoverBudgens

5. Which iconic 60's TV star was a member of the Mill Hill Services club in the 1960's and had a gypsy caravan in his back garden, that you could see from the Ridgeway? Patrick McGoohan (Dangerman, The Prisoner)


6. Which band, which were the first UK band to have a US number one, had a member who's brother ran Kellys Corner garage in Mill Hill East? (The Tornadoes - Guitarist Stuart Taylors brother Keith ran Kellys Corner Garage)
7. Which member of the House of Lords, lives in Mill Hill and ran the record label that signed Bad Manners? Lord Levy - Owned magnet records
8. Which famous comedian, who famously called Prince Charles a Grovelling Bastard, sent his daughters to a private school in Mill Hill and regularly opened the Christmas fete. - Spike Milligan, his Daughter attended St Marys Abbey on the Ridgewary

10. Which Formula one racing driver is commemorated with a blue plaque on Parkside in Mill Hill? Graham Hill
Local Knowledge
11. What was the previous name of the pub that changed its name to The Railway Engineer after security concerns regarding the IRA? The Royal Engineer
12. What tube station in Mill Hill could you buy a ticket to, but you couldn't catch a train from in the 1960's? Mill Hill the Hale on the abandoned Norther Line Extension.

13. What nationality was the owner of 'The Scotch Tea Rooms' on Station Road in Mill Hill in the 1960's? Austrian
14.  Why was the 240 bus from Mill Hill to Edgware a single decker until the mid 1960's? Because the Rail Bridge in Mill Hill Broadway was too low.
15.What would you see at the back of the big red brick public health building in Daws Lane ( was the home of the sea scouts) that was a leftover from the second world war in the 1960's  and fascinated many young  boys playing on the swings in Mill Hill Park? There was a large anti aircraft gun (allegedly decommissioned ) that the Sea Scouts would use for 'training'.
16. How much was a single ticket from Mill Hill Broadway to Borehamwood in January 1971? 8p 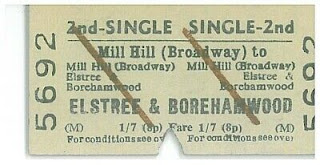 17. Why would you visit Rex Godwin on the Broadway  in 1970? (an extra point if you can say the service that wasn't advertised in the window)? Rex was a cobbler. He was also the local Littlewoods Pools agent
18. What would you buy from the back section of Mill Hill Television in the mid 1970's, which was very popular with teenagers? They had a records section and listening booths.
19.  Where was the 'New China Garden' in Mill Hill? This was the chinese restaurant that became the Moon House, then Hees. Now a beauty salon
20. What was the name of the Cricket Club that had a clubhouse in the middle of Mill Hill Park? Hendon and Edgware Cricket Club

Notable Buildings and Landmarks
21. What did the initials NIMR stand for? National Institute for Medical Research
22.  Who owns the Observatory on the Watford Way Mill Hill? University College London
23. Who were the former owners of St  Josephs College on Lawrence Street? The Mill Hill Missionary Society
24. Where is a blue plaque on the side of a Mill Hill building that marks the site of Quaker Meeting House? On the side of the house on the Ridgeway opposite Wills Grove
25. What was the name of the pub that stood on the site of what is now the Kentucky Fried Chicken? The Royal Scot

The pub was named after a famous railway locomotive, due to the proximity of the LMS line thst ran nearby. If you know this spot now, youll be struck by the difference today.... pic.twitter.com/MfF6U835dI
— NW London TimeMachine (@time_nw) April 28, 2020

(4/4) To finish with, something rather perculiar, Morris Dancing outside The Royal Scot, at night, sometime in the late 1950s, early 1960s. Anyone know what this was about? @Barneteye

26. Why was the Railway Tavern in Mill Hill a mile from the Railway Station? Because the builders of the Broadway were religious absteemious and passed a byelaw preventing a pub within one Mile of the Broadway
27. What was the building at the bottom of what  is now St Vincents Lane in the 1950's (the large yellow brick building on the left as you go down, which is now luxury flats)? In the 1950's this was an orphanage. It was originally a workhouse

28.  What was Athene House before it was an office block? A cinema

Mill Hill Nature.
31. Where was there a plague of terrapins in Mill Hill, that made national news? Sheepwash pond 2004
32. What word would you put after  the words Angel and Sheepwash to describe well known locations in Mill Hill.?  'Pond'
33. What large animal would you be most likely to see if you are heading away from Mill Hill Broadway on Lawrence Street and you look right? horses


38. What species of Deer might you see in Arrandene open space? Muntjack (there has recently been a sighting of a red deer and foal, but this is unconfirmed)
39. What is the name of the green space between the A41 in Mill Hill and Lawrence Street? Simmonds Mead
40. What tree, native to Australia, which reputedly has aromatic healing properties, would you find in the middle of the green space referred to in question 39? A Eucalyptus Tree