1967 was the Summer of Love. 1977 was the Summer of Hate. I wonder how we'll remember the Summer of '20? Will it be the Summer of nothing much. I hate to speak to early, but it looks very much like the infection rate will be down, the pubs will be open, with sensible social distancing, but football and cricket will be played behind closed doors and as for music festivals? That would be nice, wouldn't it? In fact a gig in a pub or a club would be a nice thing, but even that may be a bit risky. Can you imagine the first person to sneeze? I suspect that we will see a surge of unofficial, underground teenage raves in the woods, as the urge to have fun takes over the urge to survive. I can see the arguments now "Well, we are aloud outside and we are all 2 metres apart" (apart from those 2 over there in the bushes).

But what really interests me is how we will remember this summer. I suspect I will remember it in the same way as I remember the Summer of 1988. Can you remember the summer of 88? Well, I was 26 at the time, just bought a house and working like a Trojan to pay the bills. The band was pretty much on ice at the time. My Diary tells me that my band did one gig in the summer, my birthday barbeque. I cannot remember anything about it at all. I suspect that it was quite good fun. But given my circumstances, it was the summer that passed me by. I can remember them all up until 1987 for their jollity. In 87, I was in the process of buying the house, helping my mum get over the sudden death of my Dad and changing jobs. We were also doing a lot of work on the studio. My two best mates had gone to India, to be fleeced by the locals in a gemstone scam. I told them they were silly sausages, but still lent them £400 towards the disastrous scheme. So yes, I remember the time well. I was working for BT so I could phone anywhere in the world for free and have a chat with them, which is why I got roped into wiring them the money. So yes, although I don't remember much frivolity, I do recall the summer, but 88? Did we go on holiday? Did we see any gigs? Did we do anything at all?

I suppose that people will remember the lockdown, because although we didn't do anything, we didn't do anything in a very conscious way, as opposed to 1988, which was really just a non event. I was thinking about 2020 and how it will be remembered. I must confess that when the clock struck midnight, I was not in a party mood, rather unusually for me. It has occurred to me that maybe I even had covid. I was completely lacking in energy. We went away with friends, but I was completely knackered, for no good reason. I was in bed before 1pm. I had worried that I'd started to become a miseerable old git.  In January, we saw a couple of rather good gigs, February and March, there was some good football and a few more gigs. Then disaster struck. Our friends teenage daughter took her own life, overwhelmed with depression and the pressure of life. By the time we had cleared our heads, we were on the way to York and Manchester to collect the kids from Uni and begin lockdown. Today, I got a letter from Manchester City FC, telling me I will be getting a refund for the tickets I had to see them play Newcastle on the 17th. The League cup final against Aston Villa seems like a lifetime ago.

I imagined that 2020 would be a year dominated by Brexit, by Mid January, I'd sort of accepted that Liverpool would win the League. I was dreaming that maybe Manchester City would win the European Cup as a consolation! To be honest, right now it would be fun even to see a three legged dog chasing a ball in the park.

And then there is the spectre of the Big C, that elephant in my room that has been there since 2011. It has reared its ugly head. After five years of relative peace of mind, it looks like I may be back on the biopsy and treatment path.

There has been much talk about "what you will miss about lockdown". The simple answer is "nothing". It is good that there is less pollution, but other than that, why would any sane individual really want to be locked in there house, with no football, music, pubs, visits with friends, restaurants, haircuts, etc. In my humble opinion, if you think having your movements restricted is anything but a nightmare, then you really should get out more (once it is safe). Needs must. I've lost a much loved aunt and a couple of friends to covid19. That is three people too many. That is why I follow the rules and the sooner it is lifted, the better, which is why I pray to God that you are following the rules too.

Maybe we will learn something from all of this. My guitar playing has improved with all of the time for practice, but my creativity has plummeted with the lack of stimulation. It is quite hard writing a blog when there is nothing happening. It does seems that there is a flurry of activity from property developers, who seem to have twigged that we are all looking the other way. I wonder how many people will seriously want rabbit hutch sized flats when this is done and dusted? If that is a good thing to come out of it all, then I suppose that we should be thankfull.

It seems to me that a lot of people are learning to enjoy the local nature reserves such as Darlands, and not just for a quickie in the bushes. On our walk today, we passed dozens of people. I must admit though, that the walk will be nicer when we can stop at this place for refreshments. 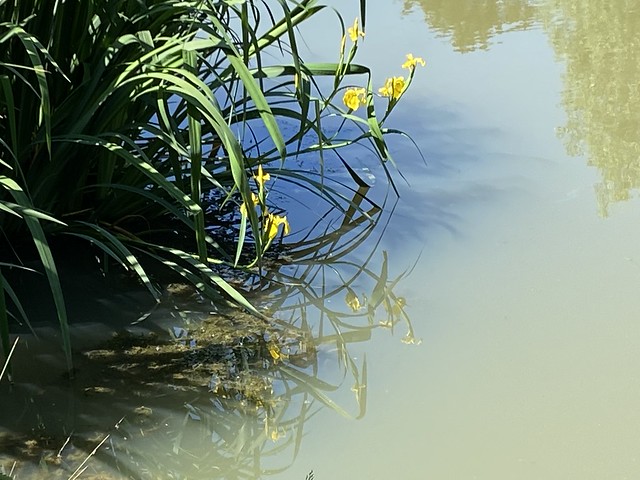