Barnet Council are planning on imposing car parking charges on users of Scratchwoods open space. Hale Tory Councillor Laithe Jajeh has posted the justification for this action on the local Facebook group 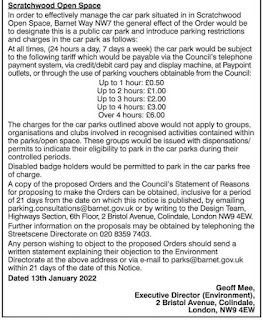 "Following the murder of a young man in December 2019, issues with an on-site cafe and members of the public that frequented the site and the overall popularity of the car park at all hours (day and night), the council and Cllr’s agreed with police guidance that there is a potential safety concern that needed addressing (monitoring of vehicle registrations that utilise the car park). This will enable the council and authorities to monitor the site and ensure illegal activities are deterred. The best option tabled was a system that did the above and in order to pay for and maintain it, a small charge was agreed and introduced at committee. This is subject to a review in 12 months and any thoughts and comments via email are appreciated: Cllr.l.jajeh@barnet.gov.uk"
As Mr Jajeh knows, I walk my dogs over Scratchwoods on a dialy basis (when the park is actually open). I choose this area as it is very quiet. I have two large rescue dogs, who are easily frightened and we rarely get disturbed at Scratchwoods. Mr Jajeh states that a 'small charge' will be levied. As I usually walk the dogs for 1.5 hours 3 or 4 times a week, the small charge equates to approx £182.50. I have walked over the area with Mr Jajeh on several occasions, discussing the issues with fly tippers and other nuisance users. Mr Jajeh declares that the charge will 'deter illegal activities'. I hardly think that people who dump stolen cars with bodies in the boot will be deterred by a 50p parking charge, it will however penalise perfectly ordinary people such as myself, who have dogs that require quiet open spaces. Several of the people I know who use the space also have rescue dogs who also benefit from the relative tranquility of the space.
Mr Jajeh states that the on site cafe has caused problems. I have no idea if this is true, I personally have not seen any evidence of this. In fact having the cafe made the park seem safer to me. If what he is saying is true, it would seem fair to address this with the Cafe owners and not penalise dog walkers and families who usethe park for recreational reasons in a perfectly social manner.
I am not really one for conspiracy theories, but I can only wonder whether it is Laithe Jajeh and the Barnet Tories way of 'paying me back' for my criticism of them over the years on the local Lib Dems Mill Hill account? The only people who will really suffer financially are the regular users, all of whom value the wonderful facility.

A walk over Scratchwoods yesterday revealed that @BarnetCouncil have done nothing about the dumped rubbish despite being notified 3 months ago @Laithe_Jajeh 1/2 pic.twitter.com/3xxBbyO5T3