As we move nearer to Christmas day, we're going to look a little bit at the story of Christmas. Before we start though, lets have some music. This is the Barnstormers - house band of the Thatched Barn, a hotel on the Barnet Bypass from 1938! Although technically just outside the London Borough of Barnet, I'm sure enough locals from the Borough had weddings, birthday parties and funeral receptions there to warrant a mention.

The Thatched Barn was a glamorous hotel built in the 1930s. It occupied the site of what was, in the 1930s, the most expensive and largest roadhouse constructed in Britain -- a two storey, mock Tudor behemoth, costing £800,000 to build and featuring parking spaces for 1000 cars, a dining room with seating for 500, a huge heated outdoor swimming pool, a shooting range and to top it all off, a gigantic over-arching thatched roof. The Thatched Barn was a favourite haunt of movie actors from the various studios spread around the Elstree area -- the Pathé newsreels of the 30s frequently showed the stars frolicking poolside. As to the story of Chirstmas, we think of a lovely scene of a baby in a manger, the cattle lowing and three wise men turning up with gifts.

Whilst those of us who are Christian draw much from the story, a wise old Jewish friend of mine, who was a staunch humanist socialist, once pointed out that we'd all missed the true story. He said that the Wise men had turned up and were interviewed by Herod, who wanted to know where the Baby was so he could murder it. The story has it that the Wise men turned up, gave their gifts and departed back to the East. He told me that he thought the Wise men were simply kind and compassionate wealthy residents of Jerusalem, who had heard that Herod planned a purge of babies in the Bethelehem area, so made their way to see if they could save any lives.

He believed that they were wise, generous and kind, but in a way we should all recognise as being a model. He said that they probably told Mary and Joseph to get out of Bethlehem and gave the gifts so they had something to raise some cash for the journey. He said we rightly commemorate them for wisdom and kindness, but we should follow their example, as a message to aid those fleeing political persecution and repression. Whatever you believe of the story, sadly there are still families with young children suffering and fleeing violence murder and injustice in the name politics today. Whatever your view of the Xmas story, whatever your religion or lack of it, surely we have a duty to support anyone who finds themselves in the same situation as a family did in a barn 2000 years ago?
So as we prepare for Xmas Eve, todays charity can only be the Barnet Refugee Service - http://www.b-r-s.org.uk
Their website says this 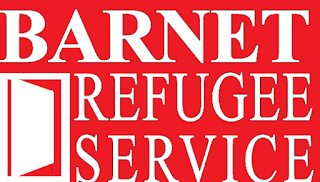 
BRS is an independent registered charity working to improve the quality of life for refugees and asylum seekers who live, work or study within Barnet and surrounding London boroughs. We work in partnership with local agencies and the greater community to promote the physical, social and mental well-being of our clients. We do this by working to reduce health inequalities, social exclusion and poverty that overwhelm this group of individuals.

Refugees and asylum seekers are among the most vulnerable members of society and have complex needs. Every year thousands of people arrive in the UK to seek refuge. Escaping persecution, disruption and wars, the majority of them have experienced torture, trauma and loss. Many have been subjected to violence and rape or have witnessed their family and friends being tortured or killed. The route they normally take to safety is risky, dangerous and often very long. Leaving behind their home, belongings and all that they were familiar with, they come to the UK facing many additional challenges, the main one being to build new lives for themselves in an unfamiliar and sometimes hostile environment, with poor linguistic skills and little or no knowledge of their rights and entitlements. Listening to the life stories of so many different people from diverse backgrounds has revealed the impact that a combination of pre- and post-migration experiences has had on the mental and physical wellbeing of this client group.

We strongly believe that while it is important to understand and address the mental, physical and practical problems of refugees, it is also respectful to honour their capacity for resilience. Our years of experience of working with this group confirm that they have a remarkable
degree of both resilience and resistance to any difficulties caused by their forced migration, and that, in a supportive and safe environment, they can adapt and rebuild their lives.

Click here to find out how you can volunteer.