Woolworths, where have you gone?
the palace of so much fun,
the Jewel in our town High Street
It's all become just so downbeat.

Iceland just don't cut the mustard,
Frozen pies and tins of custard,
Woolworths, Woolworths, please com back
Gives us all the magic back!


What it's all about....
Just looking in an old diary. 20 years ago, my then three year old daughter had successfully swam a width of the swimming pool at David Lloyds in Finchley. Her reward? I told her that when she managed it, she could go to Woolworths and I'd buy her anything in the shop she wanted, but only one item. After about ten minutes deliberation, she chose a milk shake maker. When her elder sister had been given the same choice, she'd chosen a big bag of pick and mix. We had a ritual on Sunday. They would go to ten O'clock mass. After, we'd go to Woolies and they'd be allowed a selection of pick and mix. They'd be allowed two scoops each. I'd buy records their, paint, glue, cheese graters etc. I knew the company secretary of the Woolworths group, who lived in Finchley. The company was not killed by changing shopping patterns, it was killed by asset stripping which ruined the business model. Sadly the money men who ran it and destroyed it, propagated the myth that it was an out of date business. When my kids have kids, there will be no such fun. I don't have a problem with Iceland, which is a decent enough shop, full of decent bargains, but High Streets need shops like Woolworths. I miss it and I think it's demise is yet another example of the way we are squeezing all of the fun out of everything.  Woolworths was an icon and a jewel.

The Borough of Barnet Cultural Diary

Here's this weeks round up. A few rather tasty treats!

Val's Jazz Jam - 30 October - The last Wednesday of every month sees MHJC filled to the brim with Jazz singers, players and listening aficionados who flock to the club to give of their best for the sheer joy of all. Please RT.
— Mill Hill Jazz Club (@millhilljazz) October 28, 2019


This weeks gigs in Barnet 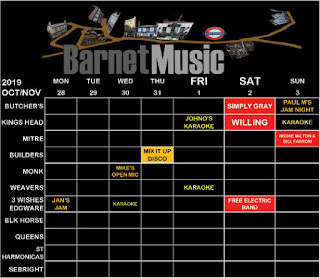 
Not long until we launch our Spring 2020 Season on Wed 6 Nov - and it's going to be a tasty one! Whet your appetite with a glimpse of what's to come... https://t.co/cL5SmKykzE pic.twitter.com/m5KkjGNrKJ
— artsdepot (@artsdepot) October 30, 2019


Lovely first over 55s Games Afternoon yesterday. Venue has changed to @Bohemia_N12 in North Finchley and will now be held every Monday from 2.30-4.30pm.

Fancy a game of Rummikub? Just turn up or contact us on 020 8432 1422 or barnetconnect@ageukbarnet.org.uk to book a place. pic.twitter.com/OmymmMMmyn
— Age UK Barnet (@ageukbarnet) October 29, 2019

Lovely first over 55s Games Afternoon yesterday. Venue has changed to @Bohemia_N12 in North Finchley and will now be held every Monday from 2.30-4.30pm.

Fancy a game of Rummikub? Just turn up or contact us on 020 8432 1422 or barnetconnect@ageukbarnet.org.uk to book a place. pic.twitter.com/OmymmMMmyn
— Age UK Barnet (@ageukbarnet) October 29, 2019

Take a look at these exclusive new pics straight from the rehearsal room to whet your appetite...📸

One for the billboard! We’ve got the 40th anniversary of the opening of our studios on Fri 1st at @AdamAndEveNW7 pub. Live music with The Ron Lewis Partnership & The False Dots + Rog T’s Ska/Reggae DJ set - all for free pic.twitter.com/ZYBKEchs5E
— MillHillMusicComplex (@MillHillMusicCo) October 26, 2019