The Saturday List #258 - Ten random thoughts about the lockdown 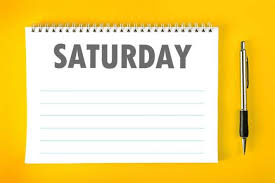 I had a Saturday list prepared. I thought, 'it's the weekend, so lets have a fun list'. Then I read my emails and messages. I realised that some of my friends are not going to be celebrating, kicking back and enjoying the sunshine. Some are grieving, some are worried sick about loved ones, some are trying to figure out how to cope with businesses under extreme stress and how the bills will be paid. Some are sick and don't know what the future holds. And then there are the non corona issues we all have. Today the Labour party will announce its new leader (You will probably know who it is by the time you read this). What will this mean? Then we are dealing with the loss of Bill Withers, a truly awesome artist. So I decided just to share a few thoughts with you.

1. Ring up your family and friends.
I have been ringing around, catching up, checking people are ok. It has been really nice. It's something we can do.

2. Where will we be next year?
This time last year, I was putting together a business plan for my studio. We saw record growth last year. More people than ever were using the studio and we were investing a large sum of money, ensuring we would be able to cope with and manage expansion. In the space of four weeks, we are now trying to put a plan together simply to get through. Will I have a business this time next year. When we emerge, will people have the inclination or the cash to pay to rehearse and record. When we open the doors, will there still be enough customers to support our business? I can see three different scenarios. One is that we don't survive, we go bust and that is that. I go back to what I was doing for many years to pay bills and do IT contract work, to pay the kids uni bills. The second is that we are surviving and getting by hand to mouth, no holidays and not much enjoying myself. The third is that we reopen and everyone has been so stir crazy, that we ae overrun and recover quickly. My best estimate is that if we get through, it will cost us three years to pay off the debts we've run up surviving. I've genuinely got no idea which of these scenarios is most likely, but I do know that the measures the Chancellor has announced will not get us through. We need to do something else and if we don't get creative soon, we will not get through.

3. I'm lucky to have my family around.
We are bunkered down with the three kids, my daughters boyfriend and the two dogs. We are all getting on well, so far and have adapted well to the routine. We are sitting at the table and eating together every night. I am blessed to have this. So many friends and family have children bunkered down elsewhere and I know that they are finding it really hard.

4. This time is a challenge to my religious beliefs.
I have always believed that I can see the actions of God in my life. I've always believed that the purpose of Church and religion is to provide a place where a local community meets and supports each other. I see scriptures, etc as a means to help us draw inner strength and make sense of what is happening around us. As such, a situation like this, where so many members of our community are pushed into isolation, some to die lonely and sad deaths is a challenge. I can make no sense of it. I have never seen death as anything other than the completion of a natural cycle, but  a situation where we cannot gather and be together as a community? That is a difficult one. Maybe, this is part of the way that God/The Universe/Mother Nature/ evolutionary pressures (delete as per your personal belief) educates us to live properly on this beautiful planet. I suspect that if I live long enough, I might see a higher purpose in what has happened, but I am struggling right now.

5. I find life without football and live music unbearable.
It's almost two weeks in. The two things that I am really missing are football and live music. With regard to football, I've realised that I don't care at all about the results, I just love the sense of being part of something. I'm a Manchester City FC fan. I was reflecting on this. There is no other team I can think of, with the possible exception of Wimbledon FC, who in m lifetime have had a more roller coaster ride. When I started supporting City, they were the best team in the country under Joe Mercer and Malcolm Allison. By the late 1990's they were a joke team in the third tier. The fans developed a certaion gallows humour. Now they are arguably the best team on the planet, they certainly were last year. But I love them no more because of the success. I was reminded by a tweet of a match I saw in 1989 at Maine Road.


As for live music. I just want to be in a grotty pub, with 40 other people watching a great band and drinking beer with friends. You either get it or you don't.

6. It's only at times like this that we realise how important key workers are.
I was in a local supermarket yesterday. A woman was behaving in a most appalling manner to staff. She was being rude, nasty and just plain obnoxious. Over the years, I've struggled to manage anger issues. One thing that has always been a trigger is when I witness bullying. Thirty years ago, I would have reacted badly and given her a volley of abuse for he rudeness. Instead, I just announced as loudly as I could "Excuse me. I'd just like to tell this young lady that you are being so rude to that I and I am sure every other customer who has witnessed this, that we are grateful for your efforts, we appreciate you turning up working in a situation where you may come into contact with the virus and can I assure you that everyone in Mill Hill wants you to carry on doing this in these times, because if you don't we are all in a really difficult situation". The rude woman just scowled at me and walked off in a huff. An old lady who had been standing in the queue said "Thank you for saying that". The poor young lady who had been getting the abuse gave me a rather embarrassed smile. Be nice, people have things on their mind. It won't take much for things to really fall apart and it is only the key workers, shelf stackers and checkout staff that are keeping us fed. Don't expect them to know when the next delivery of Foie Gras is arriving or why there isn't enough smoked eel on the shelf. Please say thank you to them. Right now, you need them more than they need you.

7. We need BBC radio and television.
We've had BBC Radio London on constantly, with presenters such as Robert Elms, Jo Good, Vanessa Feltz. I want to know what is happening in my City and they have been doing an amazing job keeping us informed. There are those on the right who snipe at the BBC, but when it comes down to it, the Corporation has made more great TV and radio than anything else in the history of the planet. Anyone who can't see that is quite plainly an idiot.

8. How many people who would have died will live because of the corona outbreak?
A very random though occurred to me. Air quality is at an all time high in our city. Thousands die every year due to pollution, many have asthma as a result. Whilst the toll from corona virus is terrible, how many people's lungs will recover? There is also much less traffic on the roads, it will be interesting to see what the number of deaths on the roads are compared to the same time last year. I've also seen so many more people walking and jogging as we've taken the dogs out. It could be that many will have better health than they would have otherwise. Lets hope so.

9. Will the internet die when the lockdown is over?
No of course it won't, but we are all bored to death and many of us are doing facebook and twitter in a way that we've never done before. When the lockdown finishes, will be so bored with the online world that we'll never look at it again? By the end of lockdown, we'll have caught up with everyone that we could ever possibly have wanted to. When the virtual affairs become real, football comes back, pubs open, will we be glad to be shot of the online world? That one for me will be fascinating.

10. What will happen next time a pandemic starts in China?
Will our governments actually learn anything? Will they get it right next time? Pandemics are nothing new, but our government seems to have been completely paralysed in ineptitude. I would have thought that of all the things we expect from our government, having a plan for things like this is pretty near the top of the list. New viruses emerge all time and it can be no excuse for not having plans and protocols in place. We live in a global society, what is the point of the United Nations and the World Health Authority if we have no plans in place for an entirely predictable situation.