Today is our 25th Wedding Anniversary - It's my party and I'll cry if I want to!

Where were you on the 1st November 1969? Some of you won't even have been born. My beloved missus was three years old. I was seven. But I can vividly remember what I was doing. It was the Saturday following Tuesday the 28th October 1969, which was my parents 25th wedding anniversary. We spent the evening in the Church Hall at the Sacred Heart, Mill Hill having a party. 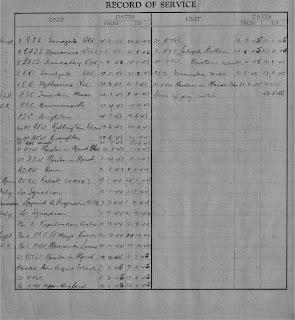 My parents had not really had a proper wedding party, they  married in wartime, there are no pictures of the day, my Dad's family were in Australia, he was serving as an officer in the RAF, working as a pilot instructor, based in Morecombe Lancashire, having returned from a short stint in Cairo following his escape from a Prisoner of War camp in Bucharest, Rumania. My parents married in a hurry. My mothers brothers were in the army, I'm not sure if they could attend. One of my Dad's mates from the RAF turned up and acted as best man. The reception was at the Hunters Lodge in Mill Hill, which is now the Good Earth. They were married by Fr Fred Smyth at The Annunciation Church in Burnt Oak. Mum told me that it was the first wedding at the Church with Fr Smyth, they remained lifelong friends.  My mum tThey then adjourned to Torquay for their honeymoon. The only story my Dad ever told was how they broke the bed and had to pinch a couple of books from the bookcase to prop it up. As my Dad was a very social guy, who loved a party, I suspect that he felt a bit cheated, but it was wartime and they wanted to make sure they got hitched.

As their 25th approached, it became clear that Dad wanted to push the boat out and have the biggest party he could afford. To my mothers irritation, he found out that a mate of his also had his 25th around the same time. So they decided to have a joint do. It seemed that this was agreed over a beer with no discussion with my mum. I think she wanted a special, big day, all of her own. Dad's logic was that the Church Hall could accommodate everyone and by splitting the hire, they could spend more on catering and booze. They could invite everyone and it would be a great night. As kids, we always got swept along on my Dad's enthusiasm. When he was in the RAF, he was the entertainment officer for 40 Squadron of the RAF in Egypt and Italy. He would recount stories of raids on nearby army stores, to retrieve booze and grub, to fuel their high jinx. As he was a strict Catholic, I once pointed out that pinching things was wrong. He replied that the army were fair game and air crew were having a far worse time and at more risk, so they needed the respite. However like many of my Dad's  schemes, the 25th wedding party, once booked, fell on my Mum to do the heavy lifting of organising. Wheras Dad would spend any spare cash he had on enjoying himself, Mum came from a poor family of Irish descent and hated wasting money. I suspect that her resentfulness of the whole thing inspired her to penny pinch a bit, but rather than salting the money away, she spent the cash she'd saved on a hairdo and a new outfit for the party. Having three daughters meant that there was a willing workforce, to make sandwiches and vol au vants, as well as bring cheese and onion hedgehogs. All of this passed me by. It was only in the 1990's long after Dad passed away that she told me this over a Guinness.

As was Dad's way, he ensured that there was ample booze and it was a great night. The friends they held the party with had a daughter in my class at School. We were put together at a table, which meant my sisters spent the night teasing me and getting me to try and dance with my schoolfriend. But it was fun. It was the first party we'd had that I can recall. It was a revelation. There was music and dancing. Sadly, being seven, I got sent home early. But it gave me a love of parties. A little switch went on in my head and it said I wanted my life to be one life long party. 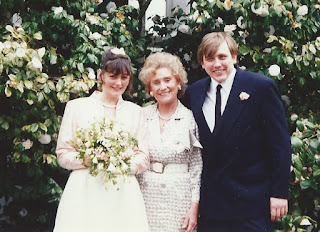 Back in 1995, it was my turn for a wedding. I wasn't someone who getting married was something in my life plan. We'd met in 1985, but had never really discussed marriage, until we found our daughter was on the way. For me, it was important that there was security. So we decided to have a fairly low key affair, with just close family. We selected The Belvedere in Holland Park. As we'd had a period living apart, where she was living in Weymouth Street, we had the option of the Marylebone registry office, which is a far grander building than the one in Burnt Oak. I suspect if it had to be at Burnt Oak, we'd never have got hitched. The 7th April 1995 was a glorious day. We had a fine lunch at The Belvedere, then made our way to Pevensey Bay to start our Honeymoon. We then continued to Rye, before crossing the channel for a tour of the Champagne regions, staying at various chateau's. We had a party for friends when we got back.

As I write this, we are not having the anniversary we anticipated. We are in lockdown, with our now grown up children. We share our anniversary with our middle daughter's birthday, so we've just been out in the garden exchanging presents.  There are many things you can't do in a lockdown, having a party is one of them. At least it means we have time to bake a cake, rather than buy a factory produced effort. There is almost a bizarre mirror image of mine and my parents wedding and Silver wedding. Their wedding was in wartime and the Silver wedding was held at the height of the swinging sixties.

The next party my folks had was their Ruby anniversary. This time, my Mum took charge. No shared party, just what she wanted and who she wanted to attend. My parents retook their vows, Fr Smyth said the mass, then we had a party in the Church Hall of the annunciation. It was a lovely affair. All of my mums siblings attended. My Dad had a good friend, a Czech war hero, who lead us in a chorus of Giveo, a traditional Czech song of celebration.  I love a party, I was looking forward to their Golden jubilee, but they never made it. Dad passed away in 1987. My mum was never quite the same.

It made me wonder about what the future holds. Will we make our 40th, let alone 50th? I suspect that I'd have written a very different blog had we not been in lockdown. Would I have thought about the family history? As I write this, Boris is in intensive care. As I awoke 25 years ago, I had a terrible hangover. I have seldom felt so ill. I'd had a stag do the week before with mates, but for our wedding my brother had driven down from Bristol and my Brother in law from Florida. Tim, my brother in law, is an emergency doctor. He nearly put me in A&E as we sat up til 3am drinking shots. I felt like death when I woke up. When I turned up at the registry office a rather green colour, if looks could kill, I wouldn't be here. My mother insisted we went to the pub for a pint before, I didn't feel like it, but it helped get me through.

It is strange, we'd been planning a big do, but never actually got around to booking anything. Instead, we prevaricated. Now we will have a little celebration in the front room, the kids suggested we do a little tradition from when they were small. Clare has her band rehearsal on a Monday night, so I had a tradition of a midnight feast. We'd go to Marks and Spencers and they'd all buy three items of food they loved. This could be sweets, cakes or savoury. We'd draw the curtains, light candles, do colouring in, sit on my middle daughters special blanket and then eat the foods. When the album finished, they'd go off to bed, no arguments. I called it a midnight feast, even though it was around 7pm. I'd time it so they'd be in bed for the Monday night football.  Sadly this time, we can't do the mob handed shop and choose spontaneously, but we will sit around this evening and honour the tradition, with a special guest, my  Missus. She has previously been banned. As we discussed the shopping list of the three items, she had to be told off by the kids. The rule is no one is allowed to influence anyone else, and the foods all have to be pure indulgence. We had a discussion as to whether we should do colouring in.

Maybe then, I'll shed a little tear for my Mum and Dad. I wish, more than anything that they could join us. But it was not meant to be.