What exactly is the point of the Mayor of London

We had eight years of Ken Livingstone and we are six and a half years into the reign of Boris. The question is, has the idea of a directly elected Mayor been a success? What have the Mayors delivered? Here's my list

Quite an impressive list, isn't it. You could say that having a Mayor has been a brilliant success. Sadly that is only half of the picture. What are the problems in London which KenBoz have failed to address?

It's pretty clear that if you have an elected mayor you get grand schemes and snazzy pet projects. What it seems you are far less likely to get is someone who is interested in the unsexy nuts and bolts that really matter to the vast majority of residents in the city. In there own ways and by their own criteria, both mayors have been outstanding successes. The trouble is that their criteria and their priorities are not shared by average Londoners.

I asked 'what exactly is the point of elected mayors'. It seems to me that the answer is to give trouble making egomaniacs something to do with their time where they can't cause too many problems for their parliamentary colleagues.
2 comments:

Christmas is coming,
The goose is getting fat,
Twittering in Barnet,
is getting old hat!

I have to confess that with every passing week, I am seeing less and less on Twitter that is interesting or revealing. There are still some gems there, the #Thisisnotamosque thread has been hilarious for instance, but generally I find nothing more boring than people saying exactly what you expect them to over and over again. I find myself looking at twitter less and less and when I do, I see less and less of interest. I don't think I actually saw a single tweet all week from Barnet that actually warranted inclusion in this list as I went throughout the week. I just looked through my activity for the last week and I didn't do a single retweet on the grounds that I thought "Thats a blinding tweet, I must share that!". Of course there are plenty of people I don't follow and plenty of tweets I missed, so in the service of the people of Barnet, here we go.

1.  Tweet from the Deputy Leader of Barnet, linking to his latest blog which is perhaps the strangest blog I've read from anyone in Barnet. Mr Thomas seems to be saying that because his grandad was a Cherokee native American, we should quit the EU????? It is worth reading for the amusement value.

Daniel Thomas @TrueBlueBarnet  ·  23h 23 hours ago
My views on Obama's recent immigration comments and what I think on the matter: http://truebluedanthomas.blogspot.co.uk/2014/11/immigration.html …

2. Did you know that Mill Hill is developing a reputation as the world centre for winemaking? Nope, neither did I until Sean Eatherden enlightened me. 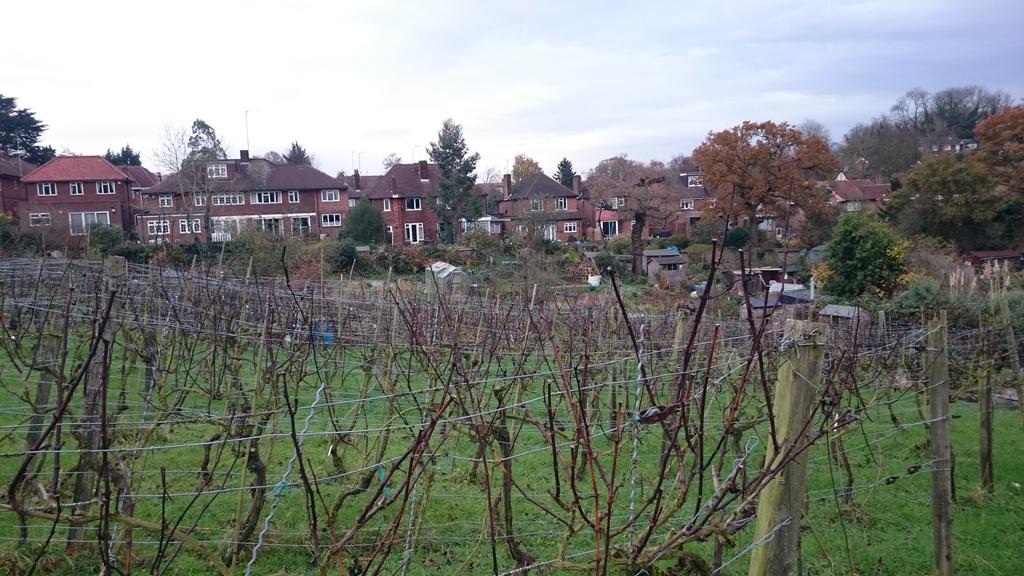 3. Hendon Parliamentary wannabe Andrew Dismore breaks the news that the London Borough of Barnet is paradise (if you are a burglar).

4. How can you be the Mayor of London if you can't tell your Brents from your Barnets - Pukka Punjabi is none too impressed with Tess of the Jowells

Pukkah Punjabi ‏@PukkahPunjabi 12h12 hours ago
Oh dear. Politician who wants to be the next Mayor of London doesn't know difference between Barnet and Brent #oops https://twitter.com/jowellt/status/538355596777779200?s=09 …

5. Now this is more like it ! The sort of tweet we want more of. Funny and well observed. 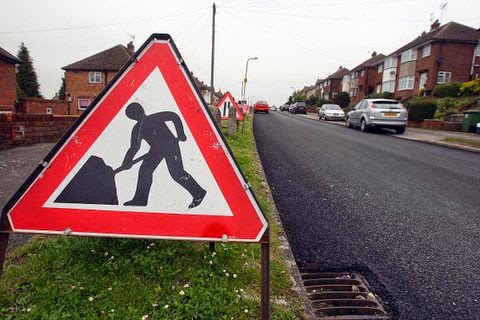 6. Jack Cohen yet agains shows why he's Barnets best councillor, helping to secure a £50K grant for his ward.
7. Want to see the Mayor of Barnet in all his bling? Here's your chance

Hugh Rayner ‏@50MayorofBarnet Nov 27
Mayor will be switching on seasonal lights in Edgware at 6pm Tues 2nd Dec from in front of Broadwalk. Will be collecting for his charities.

8. Hilariously stupid tweet from Ed Millinbans about visiting a school in Finchley. Look at the faces of the girls sitting in the rows behind him. They look as if they'd rather be undergoing root canal surgery.

Ed Miliband ‏@Ed_Miliband Nov 21
Just did a brilliant Q&A with students at Wren Academy in Finchley. They knew their stuff. 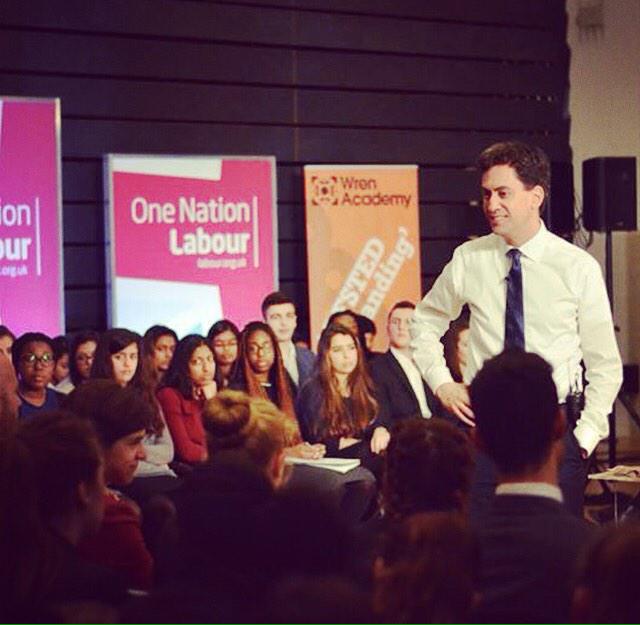 9. And while we're on the subject of spectacularly stupid tweets from Labour Leaders, try this one from Alison Moore, leader of the Labour party in Barnet Council. She is slagging off the Tories for budget cuts. Tell me Alison, didn't you instruct the local Labour group to pass a budget for exactly the same amount. Do you really think we are that stupid Alison?

10. And proof that if you live long enough, you'll see everything. The five words I never thought I'd hear uttered !

So there you go. Believe me finding ten tweets to amuse and entertain you this week has been a monumental task. There are some out there. Let me send a little message to our political elite, both Tory and Labour. Please keep posting these stupid tweets, it means that we can at least give our readers a laugh. There are decent Politicians around. Andrew Dismore is hard working and on the case, which is why his tweet was included. Jack Cohen is the sort of bloke every ward deserves to have and the fact that as a Lib Dem he survived the cull in May is testament to just how good he is. Sadly as Dan Thomas, Ed Milliband, Jowelly Tess and Alison Moore seem to prove, common sense amongst politicians is an ever diminshing commodity.

Have a lovely weekend. I'm off to a special screening of "The Empire Strikes Back" today. Then it's down to the Excel centre in Docklands to see Dereck Chisora, who trains in Mill Hill, fight Tyson Fury.

Earlier this year I visited Westminster Cathedral and posted this tweet

Rog T ‏@Barneteye
Visiting Westminster Cathedral. Saw this. A timely reminder as to why I wont be voting #UKIP 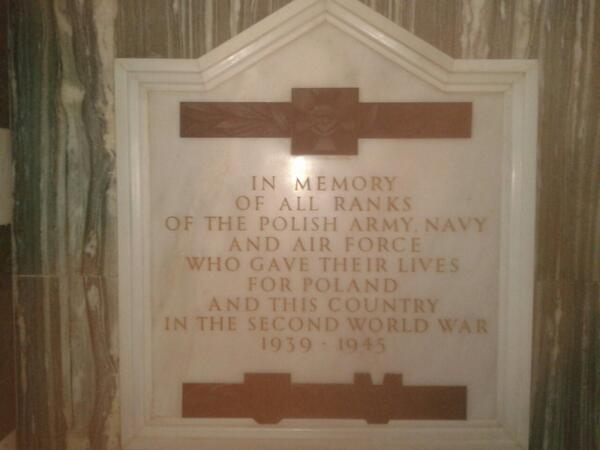 Little could I imagine that the cathedral would form the centre of a Twitter storm, as Nigel Farage's UKIP branch mistook the Cathedral for a Mosque! The Guardian tells the full story here 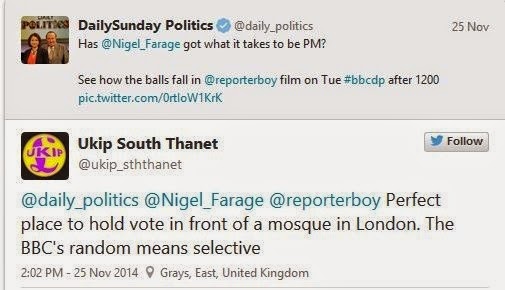 Of course we all make mistakes. I suppose that it is quite easy to mistake the largest Roman Catholic Cathedral in the UK for a mosque if you are a bit dim. Luckily it seems that the people of Great Britain are only too happy to help to educate UKIP as to exactly what isn't a Mosque, to avoid further embarrassments. If you do a twitter search under #Thingsthatarenotmosques - Check it out (especially if you are a UKIPper and want to avoid embarrassment).

Here are a few of my favourites.

Helen Anderson ‏@Persipan 19m19 minutes ago
#ThingsThatAreNotMosques - It does contain palm trees, so could be confusing...

Finally, we thought we'd add our own picture from Mill Hill, just in case!!!

Rog T ‏@Barneteye 9s10 seconds ago
#UKIP_STTHANET #ThingsThatAreNotMosques Just in case there are any confused #UKIP members in Mill Hill, this isn't 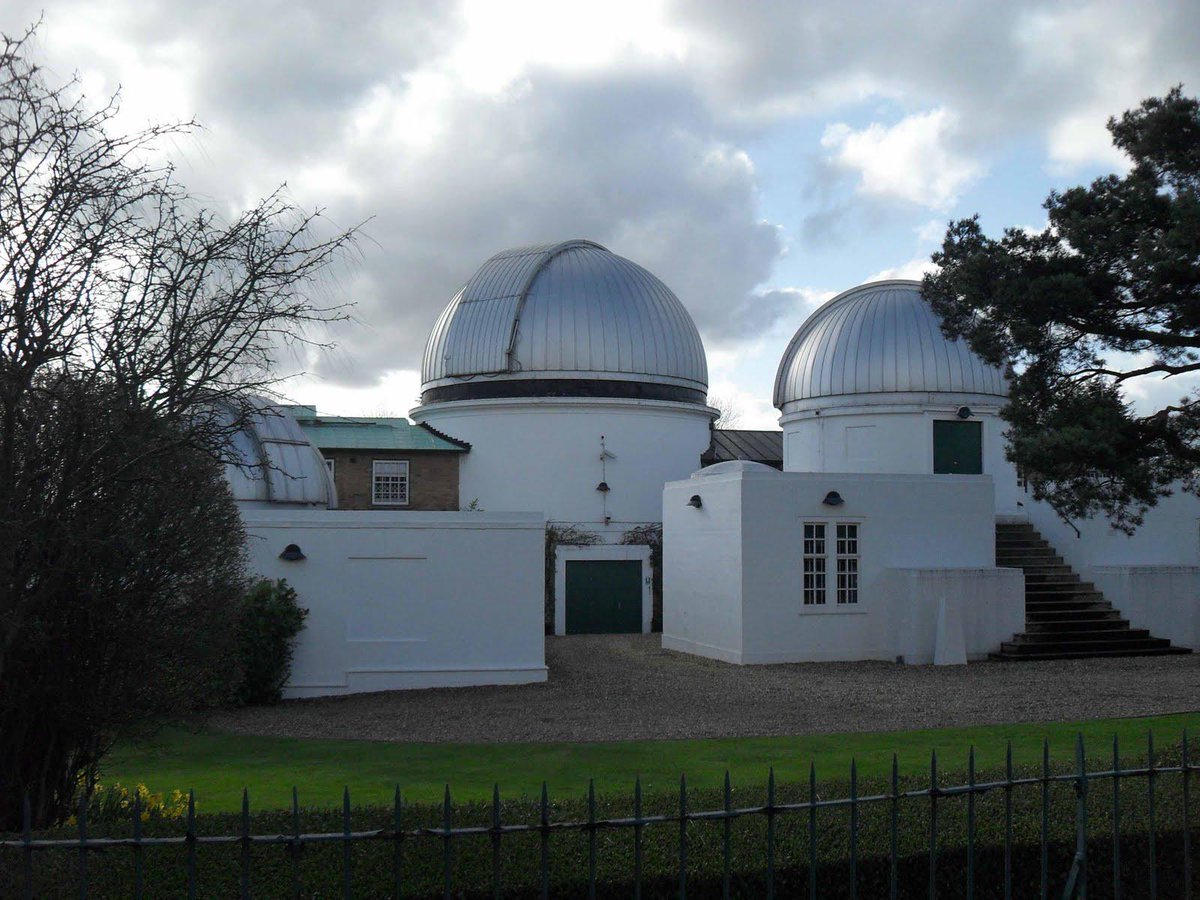 National recycling and resource management company, SITA UK, has produced a map of the UK, which shows visually how each local authority compares to its neighbours. Both are available to download from the link and may be reproduced for editorial use: www.ukrecyclingmap.co.uk

SITA UK provides analysis and relative local authority performances within the England regions as defined by Defra, all derived from Government statistics s based on the new annual data for the financial year to the end of March 2014.

The London region continues to be one of England’s lowest performers in terms of average household recycling rates, and for the first time since records began in 2000/2001 has recorded an annual decline, after falling from 34.0% in 2012/2013 to 33.9% in the year to end March 2014. Average household recycling rates across all the capital's 33 boroughs are now back to where they were in 2010/11, despite some individual improvements in some of the outer-lying London local authorities.

Only four boroughs achieved rates above national average household recycling rates of 43.5% during 2013/14: Bexley, Bromley, Harrow and Kingston upon Thames.

The highest percentage point annual improvement in 2013/14 came from the London borough of Harrow - up 4.4 percentage points to 49.2% - which was already achieving recycling rates above the national average in 2012/13. This improvement from an existing relatively high level shows that a concerted policy drive at local level, including a separate collection for food and green waste, can allow closer progress to the 50% UK target for household recycling rates agreed with the EU for 2020.

The household recycling figures for England’s local authorities continue to paint a picture of a nation stuck in the doldrums when it comes to recycling – with the national average recycling rate flat-lining around 44% for the second year in a row.

Over the past financial year to end March 2014 the North East, North West, Yorkshire and Humberside and Eastern regions of England improved their recycling rates but recycling rates actually fell across the other English regions including the South West and the heavy urban areas of London and both the West Midlands and East Midlands.

“With dwindling recycling rates and less than six years to go, the risk of the UK missing its EU target of a 50% household recycling rate by 2020 is increasing.

Despite a small annual increase in England’s household recycling rate, the pace of improvement is still far off that required to put the UK back on a greener path to resource security.

Greater focus is needed to drive change within large urban areas including Greater London, the South East and the Midlands – home to a large share of the country’s population - because small improvements in these areas could leverage a far greater rise in overall national recycling rates.

Active leadership and a policy sea change is needed at national government level to put the country’s recycling performance back on a faster upward trend.

We believe that minimum targets for local authority recycling rates, alongside financial support from Government to achieve them – through better communication and infrastructure - will help local authorities meet our national targets.”
No comments: