The first August bank holiday blog I wrote for the Barnet Eye was 47 lessons for life. I wrote it when I was 47 years old. For every year I posted a lesson I'd learned and a commentary. I think most of us have learned more this year.  It seems to me that maybe the list needed updating. So the first 47 entries are the original (with one or two minor edits) and the rest are the lessons I've learned since.

2010 - You may be working for the forces of evil and not even realise it!

A very difficult lesson. I spent the first four months of the year slogging my guts out, earning no money, campaigning for the Lib  Dems in Mill Hill. Although we lost, the party immediately went in to coalition with David Cameron, a situation I'd never considered. The ultimate outcome of the coalition was that Cameron held the referendum, quit and ultimately we ended up with Boris running us during a pandemic. Labour lost by 103 votes in Hendon, ejecting Andrew Dismore and letting in Matthew Offord. If I knew what would happen, I think I'd have held my nose and campaigned for Labour.I'm sure the work I put in could have swung 103 votes in Mill Hill. Would it have stopped what has happened, most likely no, but I'd feel less Catholic guilt.

This was the year I was diagnosed with Cancer. I have made some big lifestyle changes and I'm still here. It has been a learning process.

If you don't get it, I can't explain it.

I saw first hand the complete lack of interest that the footballing authorities have for youth and grassroots football. My son was playing for Watling Youth and I realised thatyouth football exists almost in spite of rather than because of the people who run it. The industry generates billions, but for people from homes where the parents are not interested and won't spend money on boots etc, expect no help from the rich people in lush offices who run the show.

2014 - The weakest in our society will always suffer the most when times are hard.

This was the year Barnets Tories tried to cut funding for Mapledown special school. It was a horrible poliy and thank the lord, two Tory backbench councillors blocked the horrible cut. It may not surprise you to learn neither are now Tory Councillors.

2015 - For some people intelligence is not a good thing

This was the year Richard Dawkins made his comments that it was immoral not to abort foeteses with Downs syndrome. As someone who has a cousin I love very much, who is my age and has Downs syndrome, this was hurtful and upsetting. I wonder how many parents and siblings his comments hurt. I concluded that Dawkins has a bit too much intelligence and a lot to little humanity.

Myself with my cousin in France 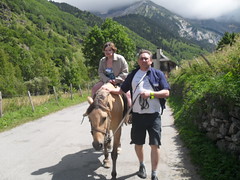 2016 - Trump vs Clinton. That was the choice for the USA, the most powerful nation on earth. There are 280 million people there. They collectively decided that was the best choice. I really can't say any more on that issue.

We saw a tragic murder in Mill Hill in January 2018. The community rallied around, there was a very moving multi faith service and a large sum of money raised for the family of the murdered shopkeeper. I was proud of opur community.

This was the year the Conservative Party chose Boris Johnson to lead them and we elected him with a massive majority. I knew no one who actually thought Boris was a principled person, hard working or had the skills required to be PM. We've seen the result, but in a funny way maybe it should give us all hope. Maybe I will still play centre half for England at Wembley one day!

At the start of the year, none of us had a clue what was just around the corner. Many of us were worrying about Brexit, not realising that by the time we left, the economy would already be devastated, many of us would have lost beloved friends and relatives. In reality we spend our lives walking the footpath by the edge of the cliff, in the dark.

What is the big lesson though? Don't be afraid to be who you really are

It must be a bank holiday weekend, the sky is grey and there is a chill in the air. But what have the tweeters of Barnet been up to? Here is our round up.

Angel Pond in Mill Hill is starting to fill up with all the rain we’ve been having, a beautiful picture! pic.twitter.com/AgKKWNspgD

2. Proper football is back in the Borough of Barnet. We made our way up to the Brickfield Ground to watch an excellent local derby between Hadley FC and Edgware Town. A great day out. Support your local teams. Hadley won 5-0, but in reality football was the winner. Great to be back on the terraces

3. The White Lion in Edgware was a massive part of growing up and our community locally. Jingles night club at the back was a place many of us had our first kiss. So sad it's gone, but nice to see these pictures

Some more images from a party at The White Lion, Edgware, on the 22nd March 1958 with employees from the Edgware, Apex Corner and Burnt Oak branches of Sainsburys. @sainsburyarch

When do you think the last time a company party had a knobbly knees competition? pic.twitter.com/zuVP5WnmsA

4. This tweet brought back a few memories. My brother used to fix the pots and pans for the chippy when they broke (he's a welder). We'd always get a free bag of chips!

When I was 16 yrs old, I would go out every Saturday & search out local Arcades or places that hosted them. I frequented a Fish & Chip Shop in Burnt Oak, North London. It hosted 2 of the biggest games of the early 90’s. Streetfighter 2 & Wrestlefest. It was nuts! 😎 #GamersUnite pic.twitter.com/OjD9KH1MB1

Did this today. @Londonist have you featured this yet? Its on the A41 nrar Edgware. Crazy golf on a different level. Great fun. #lostjunglelondon pic.twitter.com/IwFZuMYkm6

6. One of our friends is asking a very interesting question!

What will London & the South East look like in 20yrs? An inspiring competition here. Enter on your own or in a team by 31 Oct:

7. This sounds like a nice initiative. When I was a kid, my mum used to grow fruit and veg in the back garden and send us kids out to all the local old ladies with the spare produce.

Got a glut of home grown produce? If you can, plse think of selling onto friends & neighbours & raising essential funds for us. Every bit of support really makes a difference to the lives of vulnerable children in #Barnet @love_barnet @barnetsociety @barnet_rebel @InsideMillHill pic.twitter.com/FJsJfr2pVF

8. I always love to include a tweet featuring our local wildlife. Samuel is someone I can rely on to come up with the goods!

Patch Birding comes into its own at this time of year. Highlights from the Totteridge Valley today included a flyover Tree Pipit #89 for the patch year list, as well as, 3 Spotted Flycatcher, 2 Pied Flycatcher, 5 Yellow Wagtail and a bonus Garden Warbler. #londonbirds pic.twitter.com/YrNI5eSm4u

9. Julia asks a question many of us have wondered about.

I do hope you will be checking up on this and fining if necessary. pic.twitter.com/rixw5nh1je

10. If you are a local musician, this is a an article worth reading

Now is the time to write and record new materialhttps://t.co/xD5akUk8bv
Make sure you are ready to make the most of the opportunities as we open up after lockdown

Email ThisBlogThis!Share to TwitterShare to FacebookShare to Pinterest
Click on Labels for related posts: The Tweets of the Week
Newer Posts Older Posts Home
Subscribe to: Posts (Atom)