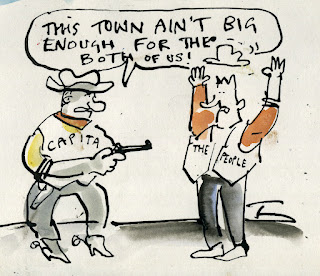 This week is “CAPITA WEEK” in the London Borough of Barnet. Following the decision of the cabinet of Barnet Council to award CAPITA a £750 million outsourcing contract, which will destroy 300 jobs in the Borough, the local blogs are spending a week investigating the record of Capita at other local authorites.

We are highlighting issues with outsourcing projects run by Capita, Barnet Councils chosen supplier for the One Barnet project. We are asking councillors to ensure that they are fully aware of all of the likely issues, before they put pen to paper with this massive contract.

Today we look at delivery. Have Capita delivered the savings that were promised? Our guinea pig council for today is Sefton.  Capita Symonds had provided the council’s technical services remit – such as road maintenance, engineering, property management and regeneration – since 2008.

But town hall chiefs are to now activate an escape clause which will see up to 140 staff transferred back to the council.

Council leaders claimed the contract was not delivering the savings which were anticipated when the deal was stuck.

http://www.liverpooldailypost.co.uk/liverpool-news/regional-news/2011/11/25/sefton-council-to-end-65m-technical-services-contract-with-capita-symonds-92534-29838970/
Computer worryingly weekly reported “Capita was found to have directly contributed to clients' maladministration in the Individual Learning Accounts (ILA) contact. The ILA scheme was implemented in 2000 and abruptly pulled in 2001, after fraudulent activity was discovered. Credentials for individuals to access the scheme were being openly traded by both individual crooks and corrupt service providers, and used to cash out the accounts. People were still being prosecuted for fraud as late as seven years after the ILA debacle.”
http://www.computerweekly.com/feature/Capita-the-story-of-where-UK-public-sector-outsourcing-began

We have heard big savings bandied about. We are told they are “guaranteed”. Has anyone from Barnet t Council spoken to Sefton Council to see what sort of Guarantees they received?
If you are worried, join the Barnet Alliance for Public Services , who are  holding a demonstration against One Barnet at Capita HQ on Thursday 20th, 5-7pm, 71 Victoria Street, London SW1H 0XA

Email ThisBlogThis!Share to TwitterShare to FacebookShare to Pinterest
Click on Labels for related posts: Barnet Council, Capita Week, one barnet