If you read what Councillor Robert Rams (cabinet member responsible for libraries) says about Barnet Council Library services, you would think that Barnets libraries are thriving and well funded. He states that one reason Friern Barnet library is being closed is to "safeguard" our other libraries.

Well I'm sorry to report that the other libraries are being run down, neglected and starved of cash. Rams claims that there is  a policy to "build up" the landmark libraries. The truth could not be more different. Tonight I visited Hendon Library at 7pm with my daughter. The purpose of the visit? 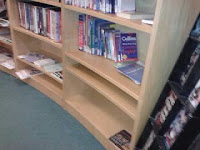 She is studying English GCSE and is studying "To Kill a Mockingbird". She had been told at Mill Hill Library that it wasn't in stock, but it would be at Hendon, as this is the local Lanmark library. Off we went to Hendon, the premier library on this side of Barnet. What I found shocked me. It could not be clearer that the book stock is being run down. I snapped a few pictures of empty shelves, just to prove a point. Even more worrying was the fact that this "landmark library" didn't have the book we wanted in stock. 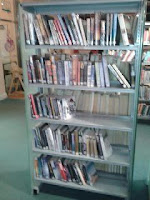 Thousands of children across Barnet are studying GCSE English as we speak. Of course there will be quite a few wishing to withdraw the book, but the Libraries must know this and should be geared up to cope. Councillor Robert Rams is the man in charge. It is clear to me what he wants to do. If the libraries have a poor book stock, footfall will decline. If this happens, then he can justify closing the libraries and flogging off the buildings, as he is doing in Friern. Since Friern reopened as the "Peoples library" footfall has shot up. There is a stock of 8,000 books now. There are no empty shelves, in fact more have recently been delivered. Nothing could be clearer to me. Rams is vandalising the Library service. He shut Church farmhouse museum and is trying to flog it off. He cannot be trusted with our heritage.

Even more disturbing is the fact that local MP, Matthew Offord lives around the corner from Hendon library. He clearly doesn't care either. He let Rams shut the museum, now he's letting him run down the library. In 20-30 years, I have no doubt that this current regime in Barnet will be viewed rather like we view the cultural revolution in China or the Taliban fanatics who destroyed 1,000 year old buddha's in Afghanistan. They care nothing for the culture and traditions of Barnet.

If your local library is being run down, send me the pictures, I intend to name and shame these B****rds. Robert Rams claims to support "One Barnet" if it is left to him, there will be "No Barnet" left.

I read an attack on Hendon Library this morning http://barneteye.blogspot.co.uk/2012/12/look-what-councillor-robert-rams-is.html

The truth is very different to the picture painted in this article. We actually have 26 copies of To Kill a Mockingbird for general loan, plus 15 copies in the Barnet Book Club collections for reading groups. So, a total of 41 copies in the system. A study guide to the book is also available on Barnet Digital library.

Hendon Library has very high stock figures: – 69,036 items in stock, of which 62,617 are books and 7,651 new items have been added. There are high numbers of books on loan at any one time in Hendon so it’s not surprising that shelves are not fully stocked at all times!
It is a sign of a successful library!

If we analyse what Rams has to say in detail, it paints a far less rosy picture. According to Rams there are 26 copies of the book in the system. This implies that there are only 26 copies for 14 libraries in Barnet, that is less than 2 copies per library for a standard text. As to the Book club collections, these are clearly not designed for GCSE students to use (who one must assume will be the primary borrowers). I had assumed that such a popular text would have a far greater number, five or six copies for larger libraries and two or three at smaller ones. You do not have to be a genius to work out why it isn't currently available.

Rams then goes on to claim that the reason shelves are not fully stocked is down to the library being successful and the books being borrowed. If there were gaps in rows on shelves that would be a plausable explanation. As you can see from the pictures, there were whole rows missing. It is simply not credible that whole rows have been cleared out by avid readers whilst other rows are fully stocked. If I'd taken pictures of a few gaps, Rams may have had a point.

As ever with Rams it is all down to trust. You have read his response, do you believe he is credible and his response means that the library service is being well managed by people who understand what it is supposed to provide. Alternatively, do you agree with me and think Rams has proven (yet again) that he simply is unfit to run libraries and museums in Barnet.

Hi Roger, my daughter 'did' this book for her GCSE a couple of years ago..I'll see if she's still got her copy...you can have it if she has.

Rog. If the book is part of a GCSE syllabus why is the school not providing a copy?

Hi Roger. In the library strategy it said that hendon library had 765,550 customer in 2009-10. That is twice the population of Barnet so doesn't look like live customers, more like every person who ever held a library ticket. Thus I don't trust Rams's figures.

The 7651 "new" items doesn't say over which period ( is it more than a year?) and if they are new purchases or just "new" stock from another branch.

Bit of a contrast with the bursting shelves at Friern Barnet People's Library! And books are out on loan there too. I have borrowed two that I was unable to access through Barnet's other libraries!

Roger, sorry but daughter has all ready donated her copy of To Kill A Mockingbird to the British Heart Foundation shop in Barnet ( unfortunately before Friern Barnet Library had been re-opened ).

Come on Rog you should be able to pick up a copy of TKAMB for peanuts in a charity shop or online.

Let someone who really can't afford it borrow it from the library!

And I KNOW this isn't the point but let's be practical here!

LBB, as you said, this really isn't the point. My daughter is an active member of the library.

I have brought my kids up to use and love libraries. If the books they want are not stocked, this will eventually lead to them not attending.

My financial circumstances are irrelevant.

Rog. Public libraries do not (and should not) act as bookshops to supply the needs of school students to pursue an examination syllabus. In my opinion your argument is with your daughter's school and not (despite your obsession) with Barnet libraries and its cabinet member.

The purpose of libraries is to lend books to people who have a requirement for them. I am surprised that you don't recognise that a student needing a book is a valid requirement. Do you advocate a system where you have to justify why you want the book?

I would have thought that any sensible person would ralise that assisting students with study is a valuable role for libraries.

My "obsession" with the council is a desire for Barnet council to provide the best service it can for residents of Barnet.

It is clear that as a former Conservative Councillor, you think these things are acceptable, so I guess we have to agree to differ.

Not at all. In the particular circumstances (how many children in Barnet following the syllabus?) I consider it unreasonable to expect the public library (funded by residents and taxpayers) to provide every child with a copy of the book that may not even be a set book the following year. Your anger in this particular instance ought to be directed at the school (also funded by residents and taxpayers).