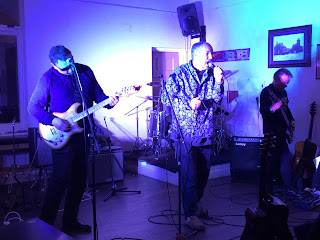 So how has the music scene really been over the last two years? As someone running a studio, I get to see things at the coalface. Between March 21st 2020 and July 2021, my business, Mill Hill Music Complex did not have a single week where our weekly income was higher that 2019. Between March 21st 2020 and July 2nd 2021, we were completely shut and generated no revenue at all. For the remaining five months of the year, our revenues were approx 30% of the 2019 figures. With the lockdown being reimposed in January, we were allowed to remain open for professional musicians. As there was almost no paid work for musicians, apart from the odd bit of TV and Radio work, this meant that we were on about 10% of our 2019 levels. As restrictions eased, we climbed back to about 50% of 2019 levels by June. We track our turnover on a week by week basis and can compare any given week with any week since 2013. July was 75% of 2019. Although this was quite positive, the fact that we'd still got nowhere near 2019 was worrying.

The reason for this is that venues/promoters were simply not prepared to book shows and run the risk of cancellations. The costs of the stop/start nature of lockdowns has perhaps been the biggest burden for businesses. The only music genre that seemed to have any sort of live work was the upper end jazz sector. Live Jazz music works quite well in an environment where you are seated with table service. The first live music I saw in London for fifteen months was at Ronnie Scotts on June 20th. This was a fantastic show by Ray Gelato. If anything, the absence made it all the better. Since then, I've been to the Royal Albert Hall for the Proms and to Kings Langley Services Club for their Jazz club. I also attended the Finchley Community carnival in Lodge Lane, but that was in a working capacity, although I thoroughly enjoyed the artists I saw perform. Given that I normally see at least one live show a week, this is a huge reduction. In financial terms, my spending on going out has shrunk to almost nothing over the period of lockdown. All of the money that has not been spent, has come out of the pockets of the people who work their socks off running music venues.

Which brings us to August. As we run a rehearsal studio, we are a bellweather. We see activity in the sector before anyone else. Bands need to be ready to perform, before they can book performances. Many will have new line ups, as members have been scattered far and wide. What we've seen so far in August has been quite remarkable. Whilst it is difficult to really draw too many conclusions on a two week period, we are about 25% up for the first two weeks in August in 2019. Given that August 2019 was our best ever August and up 22% on 2018, which had previously been the best, that is an amazing turnaroud.

As well as our favourite Jazz artists preparing for shows at Ronnie Scotts, we've had artists flying in from LA to rehearse for shows, we've had a band rehearsing for a Who Tribute show in a major theatre tour, we've had funk legends Odyssey, we've had punk legends The Buzzcocks and Menace in, just to name a few. From our perspective, this is amazing news. We did expect a bounce later in the year, but it seems that it has bounced back far more quickly than we could have reasonably expected. 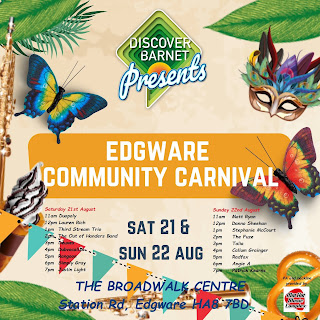 But how about in our locality? I've been a critic of Barnet Council on many occasion, but I can't really fault the efforts that they are currently making. Barnet Council and their event organiseres The Event Umbrella contacted us to help them put together a series of local festivals and events. These have been called "Discover Barnet Presents". There are some amazing things going on. We  have done the programme for the Edgware Community Carnival and there will be some wonderful music on. Perhaps the highlight of these gigs will be the Barnet Summer Festival with some absolute top class acts, including Aswad, The Trojan Sound System and E17.

The impact of events such as these should not be underestimated. It gets people out and enjoying themselves. As the events are outdoors, this is a very safe environment. It gets artists working and performing again and once they start, they will start seeking more work. I've spent my life hassling reluctant pub landords to put on music. The pattern is the same, they book my band, we have a great night and get booked again. The only downside is that they usually move on after six months so we have to do it all again!

Live music is starting to come back in Barnet, but this will not be an easy process. There are a few events at The Arts Depot, but very little music in the calendar. If you want a gig this weekend, Those Naughty Lumps are playing Madderns in East Finchley. If raucous scousers enjoying themselves is your cup of tea, then don't miss this. In Edgware, the Three Wishes, one of our best local music pubs has started to get back to a full programme of music. It is well worth checking out. The Builders Arms in Barnet is also starting back up with live music.

So where are we? Well I spent quite a while checking all of the local venues I know that do live music and what I've listed is all I could find. There are gigs happening and things are starting to open up. From our bookings, we can see that people are awaking from their slumbers, but there is still a way to go.

We need to get to work to start making live music work again in our Borough. If you run a pub, it is a great way to get people back inside. As many artists haven't played for two years in public, you are likely to have a rather full pub.  It is worth making the effort.

I believe that so long as we don't get a new wave of lockdowns, we are in for a bit of a golden period for live music for the remainder of the year. I am not the only person with a few extra pennies in my pocket and a desire to spend it and enjoy myself.