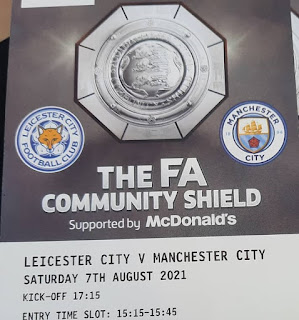 For my sins, I went to Wembley on Saturday evening, to watch a Manchester City B team lose in the Charity Shield. It was great to be in a busy football stadium once more, but there were many observations to be made regarding the covid precautions (or lack of them) and the way football fans are treated.

Firstly, on our ticket, we were advised to arrive between 3.15 and 3.45, a minimum of one hour before the start of the match. I'd checked the Wembley site to see what the 'covid protocol' was. It was less than clear but implied proof of double vaccination or a recent Lateral Flow covid test. I have a vaccine passport, my son did a lateral flow test. We arrived at around 4pm. There was no check of anything, we just walked into the stadium. By ensuring fans arrived ridiculously early, we were then left with nothing much to do except for drinking beer and eating pies. Large crowds gathered by the bars, drinking and singing football chants. I couldn't help but think that it would have been more 'covid secure', if they'd told us we had to drink the beers in our seats. At least we'd all have been outside and no one would be singing in confined spaces.

There was also only about half of the normal outlets selling food and drinks open, ensuring that there were lengthy queues. There were signs everywhere stating that masks must be worn, but almost no one was boethering, not least because you can't eat pies and drink beer with a mask on.

At full time there was the usual dash for the exit by the losing fans, again chanting as we made our way down the stairs and back to Wembley Park station. I was quite amazed that there was no efforts made at all to get a more orderly departure organised.

I am not an expert in such matters, but I would suggest that whilst we are living with covid, the government and the football authorities should give some thought to the safety of fans. Here are my observations.

1. Take temperatures and check covid validtaion on entry.  I was amazed that this wasn't done.

2. If fans are being advised to arrive early, then allow them to take beer onto the terraces. I would ban drinking of beer in the enclosed spaces. This way, they can sing and chant in an environment where the risk is to some degree mitigated. I would shut bars at kick off. I would also limit purchases so fans can't stockpile beers.

3. Make some effort to mitigate the end of match crush. Ask fans to depart row by row.

4. Ensure that there are ample outlets selling food and drink, so queues are mitigated.

It was great to be back at football, but I felt that Wembley were not taking covid seriously. With tens of thousands of fans in the stadium, it most certainly did not feel comfortable to me. I felt that they wasted my time, forced me into a potentially risky environment and skimped on covid security. It really wasn't good enough in my opinion. If Wembley believe that Covid is not an issue, don't make us get there up to two hours early. I felt that the early arrival time was purely a ruse to sell beers. We are either taking covid seriously still, or we are not.

I've shared this with my MP and the culture secretary.

I have received a comment back from my Hendon MP Dr Matthew Offord. I thought I'd share it

"Thank you for your comments, which have been noted."