The Saturday List #317 - My world tour of music top ten 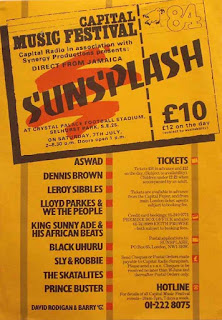 On the Robert Elms show on BBC Radio London today there was a "Jamaica Fourfer". This was to celebrate Jamaica Day. I was honoured to be asked to contribute a suggestion. I picked Dat by Pluto Shervington. It got me thinking about music from the various countries around the world. What song would I pick which I think encapsulates the essence of the nation in three minutes. Some of these were easy. Some not quite so. Anyway, I put together a Spotify Playlist of my little world tour. The hardest thing about this list was keeping it to 10 songs.  Ten songs from ten different nations, none from England. I have a couple of rules for the list. I have to have seen the band and the music has to be pretty good.

1. We start in the USA. There are probably a hundred songs I could have chosen, from 20 different genres of music. I chose Rock'n me by The Steve Miller Band to start the list because it is a damn find songs and gives us a little tour of the States "I went from Phoenix Arizona all the way to Tacoma, Philedelphia, Atlanta, LA, Northern California, where the girls are warm...". There may be songs that list more places, but none so gracefully. A proper slice of USA Hamburger belt rock and roll. I've seen Steve Miller many times, I even went to Concorde in California to wach him play with Joe Cocker supporting.

2. Next we fly off to Australia to hear the Saint's of the Parish of Brisbane, with their seminal first single, I'm Stranded. I grew up wanting to go to Australia, so I was quite surprised to learn the Saints felt they were stranded there. The Saints were the first Punk band I saw, so have a lot to answer for.

3. Next up we have Belfast's finest, the Stiff Little Fingers and Suspect Device. This came out on their own Rigid Digits label. The band's message that the troubles made life intolerable for teenagers was a brave and very different take on what had previously been my exposure to Irish music. I've seen SLF many times. The last time I found myself at Brixton Academy standing next to Psycho AKA Stuart Pearce. A damn fine band.

4. We move to Dublin for the Boomtown Rats. They were a great band and She's so Modern was their finest number. Fast and fun. It is rather dated with the line "She's so twentieth century, she's so 1970's" nearly half a century old. Where did it go. I saw this lot at Middlesex Poly, for a Rock Goes to the Colleges gig. We managed to bunk in by giving a doorman a quid. Bob Geldolf was perhaps the most unfriendly pop star I've met. We saw him on the street before the gig. Pete Conway was a massive Rats fan. Pete was a proper North London plastic Paddy and loved them as they were Irish. Pete asked Bob if there was any chance of getting us in. Bob told him to F*** Off. As Pete was covered in Rats badges and had a Rats T-shirt on it seemed a bit harsh! Pete hated them from that point, as I recall, transferring his allegiance to Crass and The Birthday Party.

5. Next we hop on a plane to Jamaica and go to he races with The Pioneers an Long Shot Kick Da Bucket. I loved this song for Donkeys years, before I realised it was about a horse! (excuse the pun). I saw the Pioneers at The Jazz Cafe a few years back, they did not disappoint.

6. Now we hop across the Atlantic to the Congo and Mose Fan Fan, with Africa Moto. Used as an anthem for the Fifa World Cup in Africa and recorded in Mill Hill! I can remember watching Mose lay down the vocals for this in our studio control room. Little did I know it would become one of the most listened to pieces of music on the planet.

7.  Next we nip up to Canada for Echo Beach.  This haunting song sort of sums up my mental image of Canada. I've only been there for two hours, a stopover on the way to the States, at Halifax Nova Scotia. My Grandad was Canadian, so I really should do atrip sometime to find out about the family history. I saw this mob at Dingwalls when this was in the charts. They were rather good. As I recall, my best mate at the time Dermot had the hots for Martha!

8. Now we head to the frozen wastes of Sweden to have a bit of Swedish Punk. I saw this mob in Stockholm in 1981. They were my then girlfriends favourite band. I saw them a few times, once notably watching with the boys from Theatre of Hate, who were on tour. I got chatting to Billy Duffy who is a big City fan. I've got this on vinyl. They were a very good band and nice guys to boot.

9. And now we head down to Mexico. We will be making a Soul Sacrifice with Santana. If ever you watch the Woodstock film, this may well be the best bit. I saw Santana in 1983 on my 21st Birthday, a treat from my then girlfriend.

10. And we end our journey in Nigeria with the King of African music, King Sunny Ade. I saw them at the 1984 Reggae Sunsplash at Crystal Palace FC. It was a glorious day, blazing sunshine and fantastic music. Of all the bands on King Sunny Ade made the most lasting impression. It was a superb bill. Not a bad days enterainment for £12.