We all have our favourite singles by bands. But for many of us, the tracks we really love are the more obscure album tracks that didn't have the immediate bite of the single, but had depth and for those of us who like to whack up the stereo and turn down the lights are the real gems that the casual fans miss out on.

1. EMI - The Sex Pistols.  Their hand grenade tossed at EMI as a parting shot for being dropped. I think it is probably my favourite Pistols track. I loved the fact that the Pistols did not take their sacking lying down and stuck their fingers up at their old label in a song.

2. I wanna be loved  - The Heartbreakers. A slice of punk energy from the seminal LAMF album. This is possibly my favourite 77 punk album. Panned by the critics for being 'bad mixes', to me it is pur energy and this is the best track. I love Jerry Nolans amazing drumming on the number.  This track reminds me of when I was at Orange Hill school and my parents had gone on holiday, giving me the opportunity to invite my girfriend around. I only had two punk albums, so I played LAMF six times in a row. When I play this I always fondly recall that.

3. Into The Future  - The Vibrators. The opening track of Puremania. An absolute classic. It is a rtack that really doesn't sound like any other. Knox at his best, sarcastic, funny and rocking. This was the first Punk Rock album I bought and this was the first track I ever played at home. I waited until my parents were out and cranked up the stereo as loud as it would go. It was amazing. I'm not sure the neighbours agreed. 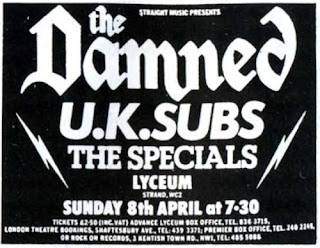 4. Doesn't make it alright - The Specials. Every song on the Specials first album is a classic, but to me this is the stand out track, for its melancholic tone and message. A masterpiece that is often overlooked for the more frenetic and well known songs. I went to see the Specials supporting the Damned and The UK Subs. I'd not really heard of the Specials. As they came on, I was about to take a sip of beer. They transfixed me for their whole set and it was only when they went off that I finally moved the glass to my lips. They blew me away. I loved the Subs, but I can't remember their set at all, as I was so blown away by The Specials.

5. Janie Jones - The Clash. The first Clash album is a classic and Janie Jones is the opening track. Depending on my mood, it may be my favourite track by the band. This may be influenced by the fact that Janie Jones was briefly my next door neighbour.  Just a great blast of Punk Rock. My abiding memory of this is a strange one. In about 1989, I was working for TSB and they were sponsors for the London Marathon. I had an entry pass. I was determined to do the course in under 3 hours. I set about serious training and was bang on schedule. I bought a Sony walkman so I could get a musical soundtrack. I found that The Clash was the perfect running music on repeat. I reckoned I'd do it. Six weeks before, I was crossing the road in Burnt Oak to get cash from a cashpoint and I got hit by a car. A broken Fibia ended that dream. The song reminds me of the pain of doing fartlek runs up Hammers Hill, pain and gain. Perhaps it was a metaphor for my view of punk, total commitment and a painful and disappointing end.

6. Shu Ba Da Du Ma Ma Ma Ma -  The Steve Miller Band. So my first five picks are from the late 70's Punk/Ska era. We gop back to the start of the decade and a track from The Joker. This was the album that broke the Steve Miller Band. Whilst everyone knows the title track and monster hit, this is to my mind by far the best track. The Bass guitar playing by Gerald Johnson is sublime. What an album track should be. This song reminds me of babysitting my brothers kids when I was a teenager. He had an amazing collection of old hippy music. I got into Steve Miller then. He'd leave me a bottle of cider and I'd often ask my mates around. Luckily his kids were usually pretty good and went off to sleep.

7. Rock Coast Blues - Country Joe and The Fish. In September 1981, I moved to Stockholm. The first thing I did was visit a record shop. The first album I bought was I feel like I'm fixing to die by Country Joe and The Fish. I took it back to my girlfriends, who thought a had come to stay and was horrified when I stuck this blast of Hippydom on the turntable as my first act. This track jumped out at me. To pacify her, I wrote her a song, which needless to say she hated. When I finally left Stockholm, I took a bus to Gothenburg, which was a drive seemingly through endless pine forests, covered in snow. The scenery was magical. I always am transported back to then when I hear this. I'd got into Country Joe through my brothers record collection, but he didn't have this one.

8. Everything I've got belongs to you - Ed Kuepper. When Today Wonder was released, the NME said it was the best album released in 1990. It may be the best album released in the decade. My wife says this track sums me up and I should sing a cover. It is a love song by a very flawed character. I suspect she'll play this at my funeral (this or glad to see you go by The Ramones).

9. I'm Stuck in a Pagoda with Tricia Toyota - The Dickies. The Dickies are possibly the best live band still running, since the demise of the Ramones. Always brilliant. This album is wonderful and this is the best track. Should have been a single. My memory of this was being back at Orange Hill School and going on a field trip to Millport in Scotland. We had to share rooms. My teacher made me share with a guy who some of the lads thought was gay. Bear in mind this was 1980 and attitudes weren't so liberal. His logic was that no one would wind me up about it. I didn't know the guy as we hadn't been friends. He was a very nevous chap, never had ridden a bike and was extreemly quiet. To get around the island, we needed to ride a bike. This poor chap was stuck in a room with a punk rock hooligan, who had only done biology to get a free holiday. I'd brought a cassette player and a stack of tapes. I explained that I liked to play punk rock loud and asked if it was a problem and he said "No". The first job was to get him to ride a bike. The next was to get him down the pub. This was full of hard Glasweigan workers on holiday. I was pretty good at Pool, so we started to play them at doubles. The chap had never been in a pub or played pool. To my amazement, he was rather good at it. After a couple of days, I realised that I'd not been terribly nice to him. He was Ok, just painfully shy. I said "I'm really sorry, I've not asked you if you wanted to play any music". I was expecting to have to endure some dire pop. He replied "No, I'm loving your music". I then wrote a list of every track and explained at length who the bands were. As we chatted, he suddenly said "Everyone thinks I'm gay but I'm not".  I said "Why do you care what people think, be yourself". He then explained he'd had a nervous breakdown and was really struggling just getting through the day. I was horrified. I asked if it was because of me and was I upsetting him. He told me that he was fine with, but he was dreading going home. He said that I'd treated him the same as I treated everyone else and he appreciated the fact that I didn't exclude him. About ten years after I left school, I met him at a punk gig, with a stunning French girl who was his girlfriend. He was a successful antiques dealer. He was still painfully shy, but had developed a good sense of humour. We had a good chat. He said to his girlfriend "It's all his fault. He insisted on playing "I'm stuck in a pagoda with Tricia Toyota on a loop until I liked it!". I didn't remember it like that, but I always think of him when I hear it. It is a wonderful song.

10. Bitch - The Rolling Stones. For me, this was the stand out song on Sticky Fingers, which is my fave Stones album. When I was about nine, I'd play my sister Val's copy all day on our stereo at home. I love the chunky riff. I recall a conversation in the pub with some muso mates when I was about 18 and they asked what was my favoruite Stones track. When I said Bitch, they all just stared at me and thought I was showing off. Then one said "How can you say it's better than Brown Sugar?". I replied "It's got a far better groove to it".