48 hours to save the Green Belt in Mill Hill


First we had a tweet from Gabriel Rozenberg, calling for development of huge areas of green. Gabriel is the Conservative Councillor/Candidate for Hampstead Garden Suburb. It is not surprising that he'd rather see the Green Belt bulldozered, rather than see the type of skyscrapers being proposed for Mill Hill in his own leafy suburb. 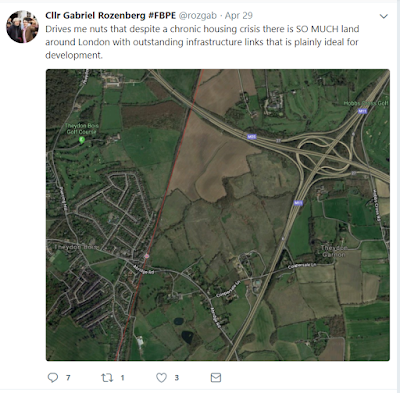 Closer to home in the Hale ward of NW7, we have seen the local candidate Elliot Simberg calling for blanket protection of the Green Belt to be abandoned, in favour of a "by case" approach.

It is quite clear that Elliot thinks that only "some instances" should be refused. In Mill Hill and Hale, only the Liberal Democrats are committed to protecting the Green Belt and Mill Hill's conservation area.

Mill Hill Liberal Democrat Candidate Roger Tichborne said "I am horrified that the Tories have abandoned promises to protect the Green belt at all costs. I've lived in Mill Hill all my life and I will fight tooth and nail to oppose any planning application which threatens the green belt. Developers always claim that there is a desperate need for land, then they put luxury flats up that local residents and first time buyers simply can't afford. Green space is vital to protect and preserve air quality. The Tories should be addressing the dire air quality in Mill Hill, rather than calling for more overdevelopment. Mill Hill already has thousands of new homes in the pipeline. The infrastructure cannot cope with any more."

If you live in Mill Hill or Hale, you have 48 hours to save the Green Belt. Make sure all of your friends know about this dire threat to our neighbourhood. Don't waste your vote and let the bulldozers roll in! Vote Liberal Democrat in Mill Hill and Hale. In Mill Hill, the race between the Lib Dems is neck and neck and it looks like we could have sensible local Lib Dems, who live in Mill Hill ward, representing us for the first time since 2010.