Today we see the new Thameslink Timetable. The good news is that there is a massive increase in the number of tranis to central London and a whole selection of new destinations, such as Rainham in Kent. The bad news? 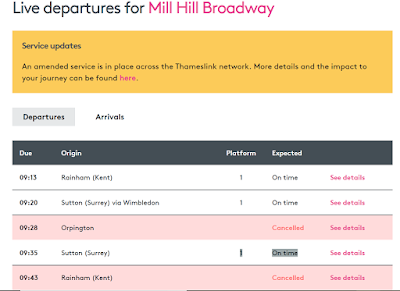 At the moment 40% of the next trains are cancelled. The Thameslink Twitter feed is packed with comments that trains aren't running and there is total chaos. Every tweet is from a person who is late for a job, medical appointment, flight..... It is simply not good enough. One has to assume that in this day and age, they know how many trains they've got, when they should get there and how many people will be on them. It simply isn't good enough. Since Govia took over running the franchise we've seen continual mayhem.

The excuse seems to be "it's a new timetable so we are having teething problems". I really find this quite hard to square off with what has happened. One has top presume they have enough trains and drivers to run the service and know when trains have to be in place. I could understand a few turning up late if services end up busier than anticipated, but as there are more trains, can't really understand this causing so many cancellations etc. You would think that on a day when a new timetable is launched, they'd throw the kitchen sink at making it work and do everything possible to make sure the service runs.

If the timetable doesn't work today, will it work tomorrow? I do hope this is a one off caused by a few train drivers having hangovers and throwing sickies after the Royal Wedding. I sincerely hope it's not a case of  "The wrong type of timetable" and this becomes a permanent feature of the daily commute