Did you know that the worlds largest aircraft factory was situated in Colindale in 1918? It even had it's own railway service. This short film and blog by local industrial historian Mark Amies tells the story.

For the hundreds of people who pass by the Kwik Fit motorists’ centre on the A5 at Colindale, the building
is just another anonymous ‘tin shed’ , that could easily have been put up in the last forty years, but its past is far more interesting. This building is the last part of what was, in World War One, the World’s largest aircraft factory. 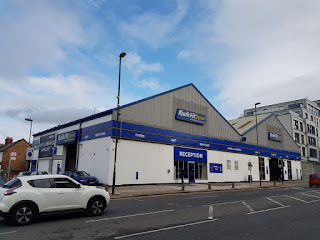 Colindale is a place that has seen great change, with the building of high density apartment complexes over the last decade, and it would seem this will continue for many more years. But back in the early 1900’s Colindale was just another part of semi-rural Middlesex. What we now know as the A5, the Edgware Road, the old Roman Road also known as Watling Street, was a semi-made highway, with tracks for the electric tram service.
The industry that Colindale became known for in the following decades, first arrived with the building of Garstin’s leather goods factory, in 1901. Over the years the name of the company has been wrongly recorded as ‘Garston’s’, but as this link to the ever reliable Grace’s Guide will show,  it is how I have spelt it https://www.gracesguide.co.uk/A._Garstin_and_Co.
However it was the birth of aviation that was to change Colindale’s fortunes. The piece of land we now know as Grahame Park, was one of the UK’s very first aerodromes, developed by the pioneer, Claude Grahame-White from 1911. Given that the nearest area of note was Hendon, it is as ‘Hendon Aerodrome’, that it became known, but in essence it is Colindale. The site became an important venue for flyers, and really became the place to come to, if you were young, wealthy and ‘with it’.
However the clouds of war were gathering, and a number of individuals, Grahame-White included, were aware that the aeroplane could be an important instrument of warfare, another was George Holt Thomas, whose family had associations with newspaper industry, and had been interested in aviation for a number of years.  He set up the rather grandly-titled Aircraft Manufacturing Company, also known as ‘Airco’, and around 1912, he decided to build a factory at Colindale beside the Edgware Road.  Holt Thomas had been very astute in his thinking, as the start of the Great War, two years later, would see Airco’s factory complex grow as the conflict wore on. If you want to get a feel for the size of the operation, basically its territory started at its main office block , which is now the Beis Yaakov Primary School, and ran northwards on both sides of the road up to where the current Mercedes-Benz showrooms are now.  The aerial image below taken by Airco shows how things were 100 years ago. 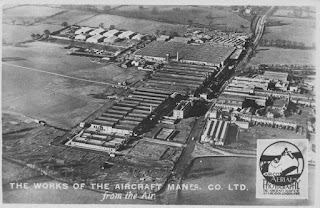 Airco was where the series of Geoffrey De Havilland-designed combat aircraft were made, starting with the DH2 and finishing with the DH10. These aircraft were amongst the most successful of the Allied aerial inventory, and a high attrition rate meant that Airco were, at their height, producing a finished aircraft every 45 minutes.
Once World War One ended, Airco went into decline and was sold off to the mighty Birmingham Small Arms Company. The individual factory buildings were taken over by a variety of businesses over the following years, the largest going to General Motors to assemble trucks, and then their Frigidaire white goods.  As the decades passed the separate parts of this once might aeroplane complex were demolished and built over, but against all odds one survived….
The building that is used by Kwik Fit was one of the very first erected by Airco. Its four sides are constructed from brick, and the twin-pitched roofs are held up by steel girders. To an untrained eye there is nothing remarkable about the building. This is down to the way the structure has been adapted over its lifespan, with the whitewashing of the brick ends, and the use of modern steel cladding over its frontage. Take a look at the image below, taken in the winter of 1917, to see how it was. 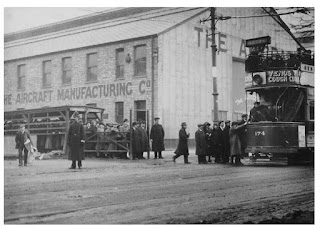 You can see the line of factory workers literally held in wooden pens, waiting for their trams, this being Annesley Avenue.  All the windows you can see were bricked in, but, today if you look carefully, it is possible to make out their shapes.
Quite when Kwik Fit took over the building, I have no idea, but the years between that point and 1920, when Airco finished with it, had seen a number of tenants. One of the first appears to have been TF Bristow, who made soaps and beauty products, as shown in the invaluable Grace’s Guide - https://www.gracesguide.co.uk/T._F._Bristow_and_Co
There is a very good series of images to be seen on Historic England’s ‘Britain from Above’ web resource, which shows the factory building in the post-war years , and this particular one, when you zoom in , you can see the Bristow signage https://britainfromabove.org.uk/en/image/EPW024761
So, after the rest of the huge Airco complex has been swept away by modern developments, you would hope that this last element of North West London’s contribution to World War One industrial history would be valued. You would assume that it was listed by Historic England. Well, sadly you would assume wrongly, because it is not.
A few months back I made an enquiry to Historic England about the Airco factory and this was the reply I got from their London and South East Regions Group Business Officer –
“The building is not nationally listed, but it may be offered some level of protection if the local planning authority adds it to a formally adopted list of local heritage assets. While local listing provides no additional planning controls, the fact that a building or site is on a local list means that its conservation as a heritage asset is an objective of the National Planning Policy Framework and a material consideration when determining the outcome of a planning application. Therefore I would advise you to contact Barnet Council’s Conservation Officer at planning.enquiry@barnet.gov.uk .

I draw your attention to our webpage where you can find further information on the designation of heritage assets, including listing (https://historicengland.org.uk/advice/hpg/heritage-assets/).”

So what do you think? I would hope that if you have got to this point in my article that you probably do care, and some of you may be outraged that the building is not listed. Less than ten years ago , the RAF Museum nearby worked with the developer of the Beaufort Park estate to physically deconstruct and rebuild the 1915 Grahame-White Watch Office building , on its site on the former RAF Hendon. That was important, so why isn’t the last element of Airco’s mighty aircraft complex equally deserving?

So here is where you stop being a passive reader of my words, and an active participant of local heritage. Contact Barnet Council’s Conservation Officer, and ask for the building to be treated as a local heritage asset. Go one step further, contact your local MP, and demand they take action.

Your area’s local heritage is in your hands people, act now, or lose it.

If you liked this, I did write similar articles in a blog I created a few years back –