I thought it would be a nice distraction to have a look at how the M1 has changed Mill Hill, using a few of the pictures from our family collection, snapping a few this morning and with a little help from my friends! I hope you enjoy this. 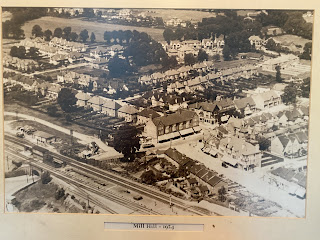 We'll start with a a picture that has been hanging in the hall of our house since the 1980's. It was bought by my Father from a guy selling photographs on the doorstep and it depicts an areal shot of my house and Mill Hill taken in 1924. As you can see Mill Hill was a very different place back in 1924. Much of the Broadway was there, but to the east of the railway there were rail yards. My house backed onto the railway lands and what is now the bottom of my garden was a footpath which ran from behind where Marks and Spencers is now to give access to the goods yard. I am endebted to Robin Morel at Network Rail for pointing me at a rather good diagram on the S-R-S website detailing what the configuration of Mill Hill railway land back in that period. By 1967, BR had stopped picking up small wagonload freight from stations such as Mill Hill, giving an ideal corridor for the new road, next to the line.

Robin also provided a rather good image showing how this had changed by 1975, when an experimental British Rail train, The APT-E sped through Mill Hill, breaking all manner of speed records. It is interesting to not that to this day, no train has bettered these times on the Midland mainline, which is one reason why roads such as the M1 are always so busy.

The M1 and The Midland Mainline from Selvage Lane Bridge, 1975 and now. Not much has changed except the trains are now electric and a bit slower 😜 - hat tip to @13milepost pic.twitter.com/PZ79fnhEd2
— Roger Tichborne/RogT #CTID 🏴‍☠️🇬🇧 (@Barneteye) March 8, 2020

My father had learned photography during the war. It was part of his job in the RAF as an air accident investigation officer. He had several very expensive cameras and liked to take photographs on Kodak Colour slides. We would have an annual slideshow at Christmas, when all the family gathered. When my parents passed away, I was lucky enough to inherit these. One of my favourite sequences of photographs by him were taken around 1967, when my brother Frank had a summer job working on the construction of the M1, by Marples Ridgeway Ltd. Dad would often nip up and snap pictures for posterity. 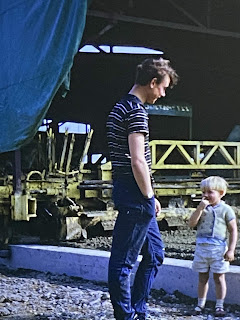 I have fond memories as a four year old of being given a tour of the works by Frank, along with my Dad, on a Sunday when  everyone was off. The machines were of mind boggling scale and I was in awe of them. I wanted to drive a 'dumper' when I grew up, like my brother and work on big machines.  My father took his camera along to chronicle the tour.  As you can see, I was so inspired by Franks job, I had to pick my nose! This picture was taken by the back of my house on Millway.  We could literally walk down the bottom of the garden and gain access to the site. There were no fences etc. I can even remember my father parking his car in our back garden, something that would be impossible now, unless you drove a tank through M&S! 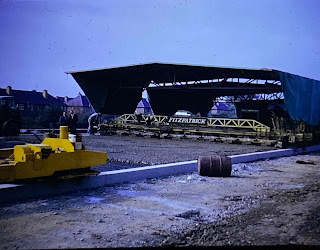 In this picture, you can see the concrete being laid to set. In the background are the houses of Hale Grove Gardens.

You may notice that working practices were rather different then. The guy on site have no hi-vis jackets or hard hats. 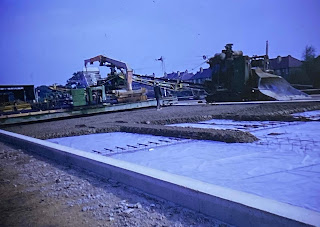 This picture is looking south towards the Broadway. There are various items of heavy plant in shot and an old semaphore signal on the railway. 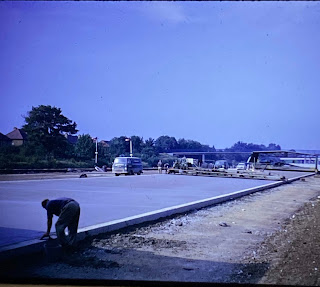 This picture shows the road being smoothed off. In the distance You can see the newly installed footbridge across the M1 that runs from Glendor Gardens to Hale Grove  Gardens. You will also see the old semaphore signals on the M1. These are now modern style coloured light gantry. There is a Commer van in the foreground.

In the far distance, you can see the new bridge on Selvage Lane. This is the bridge that the picture of the APT-E was taken from in the picture in Modern Locomotives Illustrated, around eight years late.

Over 50 years later, the M1 is still going strong, I took a few pictures of it this morning from different angles.

There are some great pictures of Mill Hill before the M1 was built on the Mempics site.