The future for the Brent Cross Light Rail Scheme?

The Barnet Eye was fascinated to receive a call discussing the potential for a brand new light rail system for the London Borough of Barnet. One of the biggest criticisms of the Brent Cross scheme is the fact that it will bring traffic chaos to the whole of North West London. The scheme envisages 27,000 new jobs at Brent Cross, even without the millions of new customers the scheme would deliver. 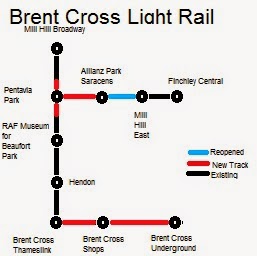 The sad thing about this is that it would be relatively cheap and easy to address these issues, but there is no political will to do so. In the Borough there is a whole stack of abandoned and lightly used rail lines, that could easily be brought into use.

Our preferred version of this scheme, links Finchley Central to the Midland Mainline at Pentavia retail Park. The line will have a spur north to Mill Hill Broadway and a spur south toward Hendon. This would require reopening the disused line between Mill Hill East and Saracens, then building a new spur to Pentavia Park and over the M1.

The norther spur to Mill Hill also gives the future option of reopening the disused line to Edgware, linking the North East and North West of the Borough. Southbound it would provide a station at the RAF museum for the new Beaufort Park development. The route would continue on the freight only tracks to Hendon and Brent Cross Thameslink, before joining a new spur to the Shops and the existing Northern Line Tube station.

1. Massively improve match day transport links for Saracens, linking the stadium to the Northern Line and The Thameslink line.

2. Improve public transport connections to schools in the Page St area, reducing congestion from the School run. There are several schools in the Allianz Park Area.

4. Provide a quick route from Mill Hill Broadway to Finchley Central and join Mill Hill to the East of the Borough.

6. Improve public transport services at the run down and neglected Hendon Thameslink Station.

7. Improve interchange at Brent Cross Thameslink station, integrating it into the rest of the North London public transport network.

8. Give a direct link to the Shopping centre, without a massive walk with heavy shopping bags. Also give an easy and credible route for shopping centre staff to get to work.

9. Provide a link between the Brent Cross Tube station and the Thameslink Station, massively improving interchange.

The scheme would go a long way towards addressing the many unanswered questions about the transport chaos caused by the huge redevelopment. The costs of the scheme could also be massively reduced by using new hydrogen cell technology in trams, reducing the requirement for expensive electronic transmission systems. These trams only emission is water, which would also reduce pollution massively.

Whilst costs are always quoted as the reason not to persue such schemes, the headline figure must be balanced against the fact that spending on infrastructure is repaid with huge dividends over many years. For example the existing Thameslink rolling stock has been running for 30 years. When you divide the costs of such schemes over such long periods, the finances suddenly become far more attractive.

Planning any new transport scheme requires a sound business case. Given the large scale developments at Mill Hill East, Pentavia Park, Grahame Park, Beaaufort Park, West Hendon and Brent Cross, it is clear to me that we need an ambitious scheme, which involves a bit more than a few extra buses. Of course there are issues with any such scheme, but given the traffic gridlock which all of the new developments are likely to bring, we need to start planning now to address them. This scheme is potentially the cheapest and most environmentally friendly of all schemes mooted so far.

How would you get from Page street to Pentavia when the disused line is no longer there?

It would have to be along the road part of the way.