Readers of this blog will have no doubt been rather disappointed to hear of some rather dodgy practicses in the Unision union election for general secretary. Local Barnet Unison Rep John Burgess was standing against long term incumbent Dave Prentis. Johns campaign was made aware of a rather damning piece of evidence, an audio tape detailing all manner of dodgy goings on involving paid Union staff, who are meant to be impartial, caught red handed helping the Prentis campaign.

In response to Johns complaint, it appears that Unison have appointed Roger McKenzie to investigate. You may ask who Roger McKenzie is? Maybe this tweet will tell you.

John Burgess had called for an independent investigation. Clearly it is very difficult for someone to investigate allegations of malpractice against their Union boss. The Barnet Eye was interested to see how "independent" Roger McKenzie actually was. A quick trawl of his twitter timeline soon gave me an answer.  There are a whole stream of retweets from Mr McKenzie regarding the election campaign (see below). Can you spot a pattern. Do you think this is the right bloke to be investigating?

The Barnet Eye detailed how a paid member of Unison staff told us how they were worried to speak out about what has been going on, due to fears for the job of any whistleblowers and a lack of faith in the transparency of the Unions grievance process, to protect staff from reprisals. In light of the way this investigation has been handled, it is clear that these fears are justified. I am sure Roger McKenzie will do his best to do a fine job, but if you were a member of Unison staff, would you be happy telling things in confidence who is a public supporter of the person who is being investigated. Unison is at risk of becoming a laughing stock. The Barnet Eye urges Roger McKenzie to say "I am proud to be asked to lead the investigation and in the interests of transparancy, I am commissioning an outside body, who are clearly impartial to investigate". That way it will show that my fears about the Unison were unfounded.

Our enquiries tell us that Roger McKenzie is a decent, honest and principled man. We are sure that he has been put in a difficult position. The only honourable thing to do is set up an independent inquiry to set the record straight. No one can argue that having important investigations run by people with a declarable interest can be viewed as a credible process. We urge McKenzie to recognise this and take the appropriate action, here are the tweets.

Dave Prentis 2015 ‏@electprentis Nov 22
In times as tough as these, you need a General Secretary you can trust to stand up for #votedave 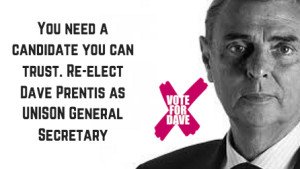 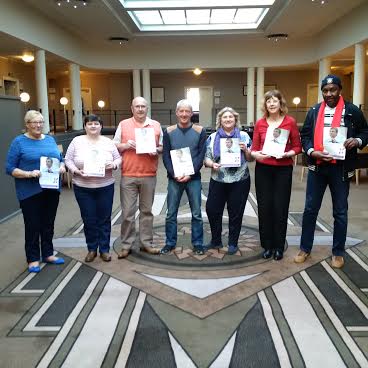 (Editor Note  -Mr McKenzie has contacted the Barnet Eye to clarify that the person on the picture wearing an Aston Villa hat is not him, as originally stated in this blog.  In the circumatances, we would like to issue a full apology to Mr McKenzie and the man in the hat for any offence caused. Of course we should take far more care in such cases )

Dave Prentis 2015 ‏@electprentis Nov 11
It's #VoteDaveDay! Share this to spread the word 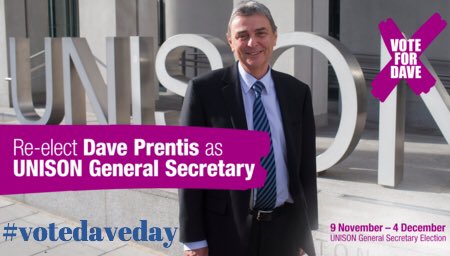 
Please note that we saw no retweets of any tweets from any other campaign. Whilst retweets are not necessarily endorsements, we suggest that as no similar tweets appeared for other campaigns, the only reasonable conclusion to be drawn is that Mr McKenzie is sympathetic to the Prentis campaign

I'm not sure the editors note is correct. I don't think that is Roger McKenzie standing on the right in the photo, you may want to check. Cheers

Jane, thank you for your comment. I have been unable to verify conclusively that it is MrM McKenzie, therefore I have updated the comment with a clarification. Many thanks for bringing this to our attention.