Why Small business owners should join the Federation of Small Business

As a small business owner, I am only too aware of just how hostile the climate is for those of us trying to run small businesses. In 2012, I tried to borrow money from RBS to fund an expansion of our studios. I was told that they were not interested. They said that we were not a good proposition, but if we sold our premises so Tescos could open a store there, they'd take a different view. Part of our expansion involved revamping our website and online booking system. I thought I'd just show you how this has gone (this is a chart printed from our booking system showing bookings since 2013, when we went live with the system). 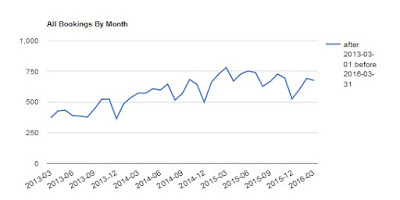 As you can see, we've doubled our turnover since then (March is not complete yet hence slight dip). I had a look at the Tesco's share price for the same period 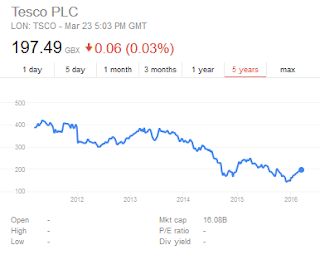 Now clearly Tesco's is a successful business, and this blog isn't having a go at them, but it is highlighting the fact that large companies  get preferential treatment from the banks, which cannot always be justified by the numbers.

The latest case of this discrimination is what is happening in Golders Hill Park. The Evening Standard highlighted the plight of the cafe there, which is having its lease terminated after decades.

Now I do understand that on paper, it is attractive for the City of London corporation to see a better return on its assets, but I think this is a very short termist view. Small businesses will stick with the business through thick and thin. When times are bad, business owners tighten their belts. Large chains will simply pull out and shut up shop to cut costs. Who knows what the future holds, but the current operators have a track record and a relationship with the locals. They have personality which enhances the area. I am sure the new chain coming in will do a good job, but it is sad that the rules always seem to work against the little guy.

I always hear the mantra that its progess. I think it is simply short termism and it isn't good for the community. I mentioned Tescos above. They had two investments in North Finchley recently. They opened a Harris and Hoole Cafe a couple of years ago. That was a coffee shop and Tescos had a change of heart and it has gone, as the business didn't work for their corporate plan. They also bought the lease of the Tally Ho Dscount store 18 months ago. The shop has lain empty and rotting since. Wheras the previous owners would have made it work and had to turn up, for Tescos it doesn't suit them to open it. This may work for Tesco's shareholders, but it doesn't work for the locals.

As a small business owner, I don't want special favours. I just want to be able to compete on an even footing with the big boys. Small businesses employ millions of people in the UK. Independent companies are innovative and add character. The one thing I would urge all small business owners to do is to join the Federation of Small Businesses, which campaigns for the sector. It was good to hear Matthew Jaffa from the FSB on BBC London this morning talking about the Golders Hill Park situation. As a memer of a campaigning organisation, it means we have a louder voice.

If you are interested in the FSB, the Barnet chapter meets on the first Monday of every month at Cafe Buzz in North Finchley at 8am. The next meeting is the 1st April. It is a friendly and informal session and a good opportunity to meet other people running businesses. I met the guy who wrote my firms website at this meeting  - http://www.millhillmusiccomplex.co.uk/ - he did a great job and that is part of the reason my firm has doubled its turnover. This is just one way in which the the organisation has worked for me.

Personally I think the FSB has become a top down monolithic corporate structure. For that reason it serves its members really badly. It needs to turn itself on its head and become a bottom up member led flexible and fleet of foot organisation.