Barneteye Person of the year

Rabbi Jeffrey made national headlines after being arrested at an Extinction Rebellion sit in. Jeffrey is not a spring chicken but is still prepared to put himself at risk for his beliefs and for the planet. He is an example to us all.

Barneteye Charity of the year

Sadly our society needs charities to ensure that the poorest citizens of the fifth richest country on the planet are fed. The team at Colindale Foodbank work tirelessly and selflessly to do this. We salute their efforts and are proud to choose them as our charity of the year.

Barneteye Pub of the Year

The Midland Hotel has become a central part of the Hendon Community, it serves great beer and has had some amazing music events this year. It is under threat and it is vital that the community support is recognised.

Barneteye Musician of the Year

Barry Ainsworth has been a central figure in the local music scene for decades. Sadly he recently passed away, but it is only right and proper that his efforts are recognised by our community.

Barneteye Sports Club of the Year

The Mill Hill Rugby club mixed ability team is an amazing project that given all manner of people the opportunity to participate in a team sport. The club won promotion after a fantastic season, and we are proud to once again name them.

Barneteye Community Event of the Year

The Grange Big fun day is a wonderful event, giving the local community a fantastic day and giving opportunities to people of all talents and abilities to contribute. A model community festival.

The local Litterpicker groups are making an amazing contribution to keeping our community pleasant. This is done selflessly come rain or shine.

Barneteye Local Campaign of the year

The group secured "Asset of Community Value" status for the pub. The group have a new challenge as the developers try to close the pub and get planning permission for an unwanted development. We need to support such campaigns to ensure that we still have a community.

With the return of the long, cold, dark nights, the homeless project once again is keeping the people on the fringes of our society safe and warm.

*****
Our musician of the year, Barry Ainsworth recently passed away. We dedicated last nights awards to him. Here is why we chose him. We were delighted to present the award to his wife Ann. 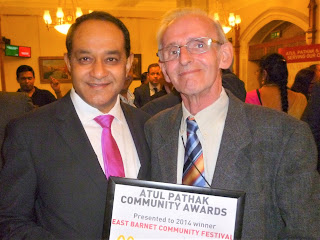 Born in Liverpool Barry’s working life started as a TV Engineer, but it was the time of the Merseybeat boom of the late 1950s and early 60s and his love of music and recording determined his future career. He came to London in 1964 and began his association with the London music industry as an engineer in Pye Studios where he recorded hits with The Foundations, Long John Baldry, Paper Dolls, Georgie Fame and The Kinks to name but a few.

He moved on to Head of Sound at De Lane Lea and the next 25 years saw him moving on to managerial and/or ownership roles in various recording companies including Command Studios, SARM Studios, Mobile One and Tape One Studios. He also enjoyed success in record and television productions, ranging from multimedia children's stories (Enid Blyton, Hanna Barbera cartoons) to producing The Biggest Bandshow In the World, which resulted in 2500 musicians being taped by an 8 camera and multi-track digital audio Surround Sound rig at Wembley. His many other productions have included work with Jonathan Miller (Rigaletto), The Bolshoi Theatre(Spartacus) and the Kirov Theatre, St. Petersburg (Giselle) Stevie Wonder, Bruce Springsteen, Queen, David Cassidy, Marlene Dietrich, Nancy Sinatra, Burt Bacharach, and Barry Manilow. More recently he’s been active designing and creating computer programmes, audio and video internet sites and productions for companies specialising in the music industry, based on his extensive knowledge of all forms of Audio - Video digital and analogue software, and music business legal knowledge of data protection.

For more than 10 years now he has been closely involved in Barnet Arts and the East Barnet Festival. Under Barry’s direction the music at the Festival has been a showcase for the established local music scene but he also encouraged and fostered new musical talent which was particularly close to his heart. The music at the Festival has grown each year and has attracted visitors from outside the borough.

The Barnet Eye intends to organise a memorial concert in Barry's honour in the New Year, with all proceeds going to Cancer Research UK.

Thank you so much Roger for organising/holding the Awards Ceremony at The Midland and for our double awards.

We met so many lovely folks and enjoyed awesome music from The False Dots and Cheyenne.

Like you said, this is all about the local community and what differences can be made when people care.

It was great to see other groups supporting various causes and we really just want to thank YOU very much for always supporting The Midland Hotel pub.

We couldn't have done it without you!!

All the best wishes for Christmas and the New Year!