The Sun will still rise in the morning

However dark the night may seem,
however bad the dreams you dream,
however grim the general scene,
the sun will still rise in the morning.

Whenever bad things come your way,
whenever pain seems here to stay,
whenever you can't face the day,
The sun will still rise in the morning.


"The defining election of  a generation". It is the 16th of my life. It probably isn't actually. Although we didn't realise it at the time, the 1979 election was the one which reshaped the way the UK thinks. Thatcherism changed the UK beyond recognition. Sadly though this wasn't the most defining, which was the 2015 election. This was where David Cameron won a Tory majority with the promise of #Brexit referendum. Everything that has happened in politics since and probably every major fatcor facing the UK for the next 20 years will be defined by that results, as we struggle to cope with the implications of that referendum. Whoever gets in, #Brexit will be the first priority.  This is likely to be no less painful, even if any party secures a huge majority. The reason is we are not the masters of our own destiny. We can't impose a trade deal on anyone and if a party gets a majority, they will have to face the uncomfortable truth that there is nowhere to hide. It will all be down to them. But whatever happens, the Sun will still rise in the morning, just as it has after the previous 15 elections.


The Barnet Cultural Round Up

Please join us on Friday 13th December at 8pm at The Midland Hotel, Hendon, for the Barnet Eye Community awards and annual Xmas party.

We are also looking for nominations for our community awards, click here for details. Free admission


Folk on Monday in Colindale


Other gigs in the Borough this week from Barnet Music 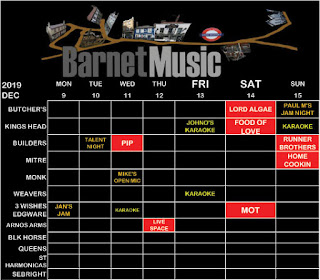 Email ThisBlogThis!Share to TwitterShare to FacebookShare to Pinterest
Click on Labels for related posts: The Wednesday Poem, Wednesday Arts Roundup