This morning, I cannot contain my anger. I was woken up with a nice cup of tea and a copy of the Daily Express. I like to wake myself up by reading the football pages. I then flicked through the rest of the paper. I daresay one or two of you will be surprised at my choice of morning paper. Well unlike many people, I enjoy reading things which I don't agree with. It makes me think about things. It also means that when I'm in the pub and someone starts spouting nonsense (or writing it in a right wing blog such as the Barnet Bugle) I have my thought process sorted out.Given that I won't have the Sun (for reasons too many to list here) or the Mail (my father wouldn't tolerate a paper which courted the fascists in the house and that's good enough for me) in the house, that leaves the Express.

This morning, sifting through the usual waffle and immigrant bashing, I came across the Vanessa Feltz column. She talks about the current scheme of government sponsored slave labour (work for nothing or we'll stop your benefits) - http://www.express.co.uk/posts/view/304860/Getting-a-foot-in-the-door - She says


Everyone knows it’s well nigh impossible to land a job without experience. So the Government’s current batch of work-experience schemes, in which recipients of Job Seekers’ Allowance are given the chance to work for reputable companies such as Tesco and TK Max for a couple of months seems like a perfect solution.


The jobless are propelled off the sofa and into the workplace. The uninitiated learn how to stack shelves, sweep yards, fry chips, greet customers, show up on time and conduct themselves professionally.


These days I present the Radio 2 early Breakfast Show too. That’s four and half hours of live radio every week day. If I hadn’t got stuck in for free I’d never have stood a chance.

As I'm sure you can guess, there are many things I take issue with Ms Feltz about. First though, lets consider why unemployment is spiralling out of control and young people are finding it hard to become employed. This is nothing to do with lazyness, it is because the current government has taken a political decision to impose a period of austerity on the nation. Now whether you think this is right or wrong (a debate for another day), the effect is that young people cannot get a job.It is not the fault of the victims of this policy, so please don't portray them as lazy or workshy.

And then there is the effect of this slave labour. Presumably if Tesco's are taking people for free to do unskilled work, then that means that for every person working for free, one paid job has been destroyed. Only an economic imbecile (George Osborne?) would take such jobs out of the economy at a time of economic crisis. What work ethic does slave labour instill in people? "If you go to work, you don't get anything"? What sort of a message is that?

Now don't get me wrong, I'm all for unpaid work. I volunteer for a homeless charity once a week. It actually costs me money, because I have to travel to Victoria at 6.30am every Thursday. I also write this blog for nothing. It may surprise you to learn that I've been offered several highly paid jobs as a result of people reading this. People seem to think I've some talent for PR. I've declined, because all of them have been promoting things which I think are reprehensible. What is quite bizarre is the response of people when I tell them I'm not in the slightest bit interested, however much they want to pay me.

I read the likes of Vanessa Feltz comments and I feel sick. I doubt anyone has a stronger work ethic than me. I first started doing paid work aged 4 1/2. I was in a commercial for Tizer in 1966. Other commercials followed, Heinz baked beans, Galaxy Chocolate, Cadburys chocolate to name but a few. I also did countless fashion shoots. My career stopped aged 8 when my mother developed cancer and could no longer take me. At age 16, I had enough money in my bank account to start my studio business (albiet in a small way). And the other jobs I did before I was 16. Washed cars at my fathers garage, delivered papers, worked as a saturday boy at the butchers. Perhaps the most audacious of the lot was when I was 15 and I bunked off school for three weeks before Xmas and worked at the Medical research in Mill Hill. I wanted the money to pay for a guitar. That was when I found out what it is like to work for free. When my scam came to light, the agency refused to pay me, claiming it was "illegal to pay a 15 year old". I've always believed in standing up for my rights and eventually got paid. Sadly I suspect that it was more to do with being large and aggressive than anything else.

So sure, yes I can lecture anyone on the "merits of hard work". Ever since I've worked I've done 2,3 or even 4 jobs at the same time.(if you call blogging a job). I run three successful businesses (all built from nothing by me and the people who work for me), I employ nine people. I go on expensive holidays and I pay myself dividends. So yes, in some ways I'm a rich capitalist bastard. But do I think it is all because I'm a genius or better than anyone else? Far from it. I realise that all of it is an accident of birth. I had parents who helped and supported me. Realising I had learning difficulties and would probably never go to University, they encouraged me to do my own thing. My father made a workshop in his garage available to me for music. I did the work to bring it up to spec and paid a rent, but he suggested it. You see, what Vanessa Feltz fails to realise is that  the kind of kids who are forced to stack shelves at Tescos, don't get offered internships at the BBC. They get exploited and then cast away. 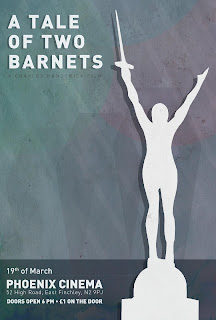 I've spent the last five months helping a young filmmaker, Charles Honderick make a film. It's called "A Tale of Two Barnets". It is full of stories of people who have been failed by society. Can I let you in on a secret. The film has cost me personally a fortune to make. If I ever make a penny back it will be a miracle. I hope to God that Charles gets a foot on the ladder as a result of it. He's sweated blood making it. He's eaten us out of house and home when we've been working on edits. Why? Because he's skint and I've got a well stocked fridge. But he's doing it because it is something he loves and he knows that if you want to succeed in the creative world, this is called paying your dues.  This is totally different to stacking the shelves in Tescos. This is why I think Vanessa Feltz is talking crap.

Email ThisBlogThis!Share to TwitterShare to FacebookShare to Pinterest
Click on Labels for related posts: A Tale of Two Barnets, Barnet Council, Vanessa Feltz

Were you in:
Drink Tizer — The appetizer!

or was it:
Tizer — The surpriser!