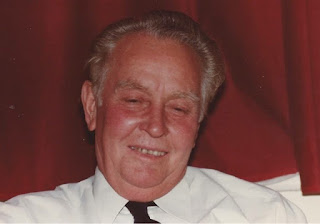 Sunday the 9th November 1986 is a date that always brings a tear to my eye. Today is the 33rd anniversary of that day. What happened you may ask? I had a curry with my Dad. He'd been seriously ill earlier in the year, having his Gall Bladder removed. After a lifetime of smoking 60 ciggies a day, he'd given up. Earlier in the day, he'd been to Mass with my mum and then she'd travelled to Bournemouth to see her sister Margo for a few days. Dad was at a loose end and rang me up, asking if I fancied a curry. I was living in Mollison Way at the time and had nothing in the diary. So we went for a pint and a game of snooker at The Services club, a curry and a nightcap at my parents house. The next day, I had a sore head at work. My parents would shortly depart to Florida, for a holiday in the sun to recharge their batteries. The plan was to stay with my sister Valerie until the colder months of winter passed. I didn't know it, but it would be the last time I ever saw my Father alive. He returned to the UK on the 29th January, as my mums sister Margo had unexpectedly passed away, I didn't know he'd returned, as there were no mobiles and they hadn't called me. The first I found out, was at 7am on the 31th, when my brother Laurie called, telling me he had passed away in the night, with a suspected heart attack. It was an event that changed my life, for the worse. I still miss him.

1) His turn of phrase. He had a way of descriptively summing up situations concisely, with wit, sarcasm and humour. He had all manner of strange sayings, from the outback of Australia where he was raised and from the RAF. I recall watching the World at War with him, and as a senior RAF officer was talking, he commented "How would he know, he was a shiny arsed desk jockey".

2) His "Will do" attitude. If he decided to do something, nothing would stop him. Perhaps the best example was when our next door neighbours had a tree that was undermining the foundations of our house. He asked them to have it removed and they refused. He simply found out when they were on holiday and got a few mates to come around and chop it down and burn it, then denied all knowledge, claiming he thought they'd seen sense.

3) His maniac driving. My Father was a complete petrol head. His pride and joy was a 3litre Capri, that had been souped up for the Pan African rally. He drove it like a looney. If he saw a Police car, he'd burn them off. If a speeding ticket turned up, he'd simply say that it was one of the staff at the garage he ran and claim he was very cross. He was no respecter of authority and driving laws. He would take us out for drives and took great delight in driving extremely fast through puddles, especially if there was someone he didn't like the look of nearby. As a kid, I thought this was normal sensible behaviour.

4) His extraordinary kindness. My mother used to berate him for being too kind. One of his staff spent all of his wages at the bookies before Christmas. The guys wife was sent up to plead for an advance on his wages. My Dad refused, but then took her around to the Butchers, bought her  a turkey and then to the Co Op and bought her a box of provisions. He said "The idiot can't spend that, so you will have a Christmas". He then told her that she had to collect the wages in future, and if she wanted to give him pocket money for the bookies, that was her business. The following week on pay day, they guy kicked off. My Dad, who was a fearsome character said "You are an idiot, but your wife isn't. If you take my advice and let her watch the money, you'll still have a wife this time next year". My mother was furious at him for spending so much, but he said he couldn't sleep if one of his staff's
family wasn't having a Christmas dinner.

5) His sense of fun. My father believed life was to be enjoyed and money was to be spent. He loved winning raffles, so would buy as many tickets as he could afford, winning all manner of useless prizes. At one event he won five in a row. When someone suggest that he give the prize back, he replied that if they wanted it, they should buy more tickets. Again to my mum's disgust, he'd always have the most expensive steak on the menu, when eating out. His view was that that was the thing he'd enjoy most, so that's what he'd have.

6) His disdain for cheapskates. The one thing my father despised more than anything, was people who wouldn't buy their round in the pub. Cheapskatery was to him the sign of sad, unimaginative person. To be called a 'Skinflint' by my father was to be damned forever.

7) His advice on dating. My Dad was a charmer. He thought I was a bit dim and a bit useless as a teenager, so he'd impart all manner of interesting advice "Don't eat spaghetti on the first date as you'll make a mess of your shirt and look like an idiot", "Always polish your shoes before a date, as women look at your feet first",  "The more special you make a girl feel, the more she'll like you". My father told me once that he was bemused that I ever had a girlfriend. I was taken aback and asked why. He said "You never brush your hair, you're always skint and you haven't got a car". I replied "Yeah, but I've got your charm when I need it". He just laughed and said "yeah, but think what you could be doing if you brushed your hair, had cash and a decent car".

8) His boxing and cricket commentaries. Watching Boxing and Cricket with my Dad was always fun. He'd played cricket at a good level in Australia and boxed in the Australian Army and Air Force. He loved both sports. He would give us a commentary. I always thought he was talking nonsense, until the Rumble in The Jungle fight between Ali and Foreman. He loved Ali, thought he was a boxing genius and a man of high principle. I recall him telling someone who called Ali a coward for dodging the draft that no one was a coward who got in a boxing ring. In the fourth round of Ali's Rope a Dope routine, as Foreman battered him, I said "Foreman is slaughtering him". My Dad replied "No, Ali is too smart for him, he's tiring him out". In round 8, he said "Told you so". His favourite cricketers were Jeff Thompson and Dennis Lillie, proper Aussie fast bowlers.

9) His ability to mend things. My Dad was a superb engineer. There was nothing mechanical that he couldn't mend. He'd buy broken petrol lawn mowers and fix them and all manner of household appliances were fixed. He tried to pass this on. When my elder brother wanted electric guitars, he bought them the bits to make them. Frank became a rocket scientist and Laurie the worlds finest welder.

10) His cooking. Unlike many men of his generation, My Dad was a brilliant cook. His range was limited,  for breakfast, he'd make awesome omlettes and bacon and tomato sandwiches. He'd buy the best ingredients he could, and taught me this was the secret of success. For lunch or dinner, it would be steak. He liked steak to be incinerated, I loved it. His view was that if it took more than 15 minutes to cook, it wasn't worth the effort. Steak with veg was the perfect dish for him. At our last dinner, I asked him about his cooking skills. He told me that his mum had told him "learn to cook the things you really like, then you will always live like a king!". It was wise advice.