The Wednesday Poem and the Borough of Barnet Cultural round up - Where is Reg?

Has anyone seen Reg?
Is he at the allotment tending his veg?
Is he in the garden trimming the hedge?
He's not in the pub, has he taken the pledge?

Has anyone seen Reg?
He's not been seen at the river edge
Or on the jukebox playing Percy Sledge
He's not paid back the borrowed wedge

The pub won't be the same!

Have you ever known someone who suddenly disappeared, leaving no trace, only a few rumours of debts and an empty bar stool at the local. I have a confession to make, this poem was based on a chap called Colin, who was a character around Mill Hill in the 1960's. He disappeared one day. A few days later the Police turned up, he'd been involved in a "dodgy motor ringing scheme". The word was that he'd ended up in Canada. To the best of my knowledge he never came back. Sadly there are virtually no words that rhyme with Colin, so I almost gave up. Then I thought about my old mate Paul Hircombe RIP, who had a Jack Russell terrier called Reg. He was always disappearing, into bushes, under hedges etc. So Colin became Reg! I wonder if people still 'scarper' when  they are suspected of ringing motors?


Round up of music, arts and other local cultural events


Live music in Finchley this Sunday with the Trembling Wilburys 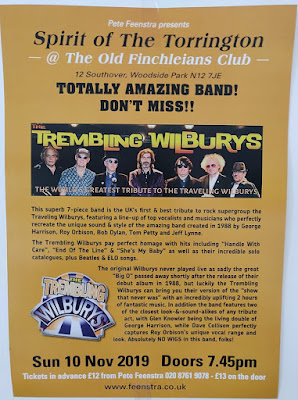 🎵 What good is sitting alone in your room?
Come hear the music play
Life is a cabaret, old chum
Come to the cabaret! 🎵


Something for the Kids this weekend

Monty has a problem - he's made so many monsters, what is he going to do with them?!@MonstersaurusUK is an energetic show full of thrills, spills, magic and mayhem for the whole family! 🧪 See it this weekend: https://t.co/5pj1P0AdTX pic.twitter.com/EPbvIPk4fH
— artsdepot (@artsdepot) November 5, 2019


Snow White and the Seven Dwarfs at the Bull Theatre

Email ThisBlogThis!Share to TwitterShare to FacebookShare to Pinterest
Click on Labels for related posts: The Wednesday Poem