Here's a question for you. How often do you look at the buildings in your street or on the way to the shops? Last week, I was out with Industrial Heritage expert Mark Amies making a short film about the former Airco factory on the Edgware Road at Colindale. I am still editing this, but it got me thinking. What is my favourite structure in the London Borough of Barnet. As I went through, I started to realise just how many iconic and important buildings have been demolished and replaced with absolutely awful, soulless blocks. Occasionally there is a good reason for this, but the redevelopment of St Pancras Station and Coal Drops yard has shown what you can do when you take magnificent structures and repurpose them. Sadly in Barnet, planning does not mean sympathetic architecture or imagination. I often wonder if Barnet deliberately recruit town planners who came bottom of their class. Anyway, here are a few and why they are important to me. 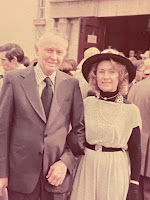 This building was a centrepiece of my youth. I was baptised in the church, I had my first communion in it, I had my  confirmation in it. My fathers funeral was held in it, as were numerous other family members. There were also many weddings etc in it. As a kid, I attended the youth club and the film club. But it was deemed not fit for purpose and replaced with a nice modern church that isn't drafty and completely lacks any great feeling of timeless spirituality. It breaks my heart. The picture is of my parents outside the church in 1974. When you remove the building, it makes such images painful. In the planning process there is no value at all placed on the hurt the demolition of such places of important heritage may cause. To me it is cultural vandalism. Can you imagine how it feels looking through the family albums in the knowledge that the backdrop to my life has been systematically erased.

2. The National Institute for Medical Research.
I went to school on The Ridgeway and the NIMR loomed over us. I had no love of the building, having worked there and seen the animal experimentation but it was a heinous act of cultural vandalism to destroy it. We used it as a backdrop to this video that my band made. It's demolition being a metaphor for what is happening to our country. Capita manage planning in Barnet. We made the video for the Kick Out Capita Campaign, but if you watch it you can see the destruction of the building taking place.

3. The National Newspaper Archive in Colindale.
When I learned that this was being demolished, I was flabbergasted. This was such an iconic building. I couldn't believe that Barnet Council didn't fight tooth and nail to save it. I was shocked that they didn't even bother to try and keep and iconic institution in the Borough. I despair, I really do.


Developers have free reign in borough of Barnet ,in Colindale the British Newspaper Library is demolished for homes. pic.twitter.com/idkVkcG0SS
— Mark Amies (@Superfast72) March 14, 2015


4. The Copthall Diving Pool.
My daughter was a national youth swimming champion. Copthall swimming pool was a centrepiece of our family life for a decade. She was a member of the diving club for a while and this was as fantastic and inspirational element to the club. Barnet spent a lot of money redeveloping the pool, but in a scandalous act of destruction of a well respected club, they decided that diving wasn't value for money. Short sighted and stupid. If you ever win the lottery, please give a couple of million to the diving club, so we can reinstate this.


And so demolition of a perfectly good deep water facility begins....
Despite 47 million being spent on two new centres with just swim pools - the deep water pool will now be demolished forever.
Goodbye #BarnetCopthall we fought to save you alongside 11,000 #Barnet residents 💔 pic.twitter.com/7ZpT5pjeZG
— NorthLondonAquatics (@Save_Diving_Ldn) October 15, 2019

4. Hendon FC.
The field of dreams. The FA Cup tie against Newcastle. The local football community. Count's for nothing in Barnet. Hendon FC's ground was an outstanding example of a non league ground. It should have been listed, not demolished.

End of an era Hendon FC Stadium being demolished today. Been there since 1926 very sad. pic.twitter.com/ANKkPzkP
— Nessie B (@mrsgoldenballs) November 1, 2012

5. Barnet FC Underhill.
If Hendon was a crime, Barnet FC was a tragedy. The club fell foul of a war between the local Labour and Conservative parties. The local Conservatives hate football and did everything they could to force Barnet out of the Borough. This was maainly driven by spite, as the former Labour/Lib Dem adminstration had been proud of the club and given them a great deal on the stadium to stay. This is one of the things that has constantly inspired me to write blogs.


6. The Methodist Church, Goodwyn Avenue NW7
Sadly I have no photo's of this small church. I'm not a Methodist, but I was exceptionally fond of the place, as it had a youth club. As a boy I'd play table tennis there. Iconic British Rockabilly band The Polecats used to rehearse on the site. The congregation fell. The Council wouldn't allow a redevelopment, so the new owners left it open with a can of petrol and a box of matches in the porch, metaphorically speaking. It burned down and is now housing. Another communty asset for young people lost.

7. The Finchley Gaumont Cinema.
I could  make a list of the demolished cinemas in Barnet, but the Gaumont was the finest example and for me the saddest loss. When I was at FCHS I would wait for the 221 bus to Mill Hill at the bus stop next door. We'd be taken to the cinema to watch educational films, and bunk in to watch Confessions of a Window Cleaner (that was what passed as pornographic for teenage boys in 1976).  It was an amazing business. The Arts Depot is a great resource, but it is ugly and soulless and lacks the style that the Gaumont had. They should have built the Arts Depot in Burnt Oak, an area that needed a boost, not on the site of the Borough's best cinema

The Gaumont Finchley opened in 1937 and was demolished fifty years later in 1987. pic.twitter.com/kdeQzmnaua

8. The Bald Faced Stag, Burnt Oak.
The list of lost pubs is long, sad and depressing. I could have chosen any one of a dozen, but I chose the Stag as it was a pub my band had a residency at in 1984. It was a hard, working class pub that had a reputation, but was a vital part of the community. When such establishments are demolished, no one ever thinks about the people who need a place to meet friends. Ordinary people

The Bald Faced Stag, Burnt Oak in the 1960s & today. I don't quite know what is happening with it, but it's been left like this for nearly a year.

9. The Barnet Tardis!
This was a real landmark. When I was a kid, my Dad would take us out for a drive looking for Dr Who. It was demolished in 1980, things were different then, but I really don't know why we have to erase every little oddity when it becomes redundant. I was rather chuffed finding this picture of it.


Most were destroyed in the early 1970s. A few lucky individuals survived the massacre however. The last one in England stood on the Barnet Bypass and was demolished in 1980. And here it is - photographed in 1980 just before destruction! pic.twitter.com/xJDsq80CUx
— BabelColour 🎞 (@StuartHumphryes) August 27, 2018


10. The Victoria Park Lodge.
Our local heritage counts for nothing. Aesthetics count for nothing. There are thousands of ugly, sub standard buildings in the Borough, yet they chose to demolish the lodge. There is a reason. The luxury flats which replace it will overlook the park and therefore command a premium. This is not about housing provision, it's about profits. It is sickening.


The Lodge is being demolished now! @BarnetCouncil as trustees of Victoria Park have failed in their duty as trustees. Why is this happening to the historic lodge in Victoria Park, Finchley N3? pic.twitter.com/vXhDCM8rsi
— Victoriaparkfinchley (@victoriaparkfi1) June 11, 2019


Sorry to post such a miserable blog at the weekend, but sometimes it has to be said. I do wish I didn't give a F...

It may amuse you to note that whilst I was writing this I was interrupted by an urgent call from the Save The Midland campaign. Lets hope that there won't be an eleventh building on this list.

Please join us on Friday 13th December at 8pm at The Midland Hotel, Hendon, for the Barnet Eye Community awards and annual Xmas party. We are also looking for nominations for our community awards, click here for details. Free admission
.