A rant - Why I hate September 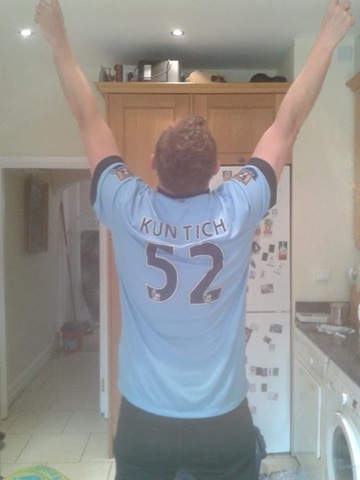 It's been a while since I went off on one about nothing. But now we've got that most awful month of the year over, I feel safe to share my feelings with you. Like most people raised in the Roman Catholic tradition, I am deeply superstitious. I have managed to pass this on to my children to such an extent that my son spent most of last night berating my wife for sending negative vibes to the Manchester City players in the champions league game. Neither of us will go to the toilet unless either City have just scored or the ball is in Joe Harts hands during a game. But I digress. You see I believe September is an evil, foul month, but I have learned not to speak ill of it, whilst it holds sway.
I can quote many examples of its foulness, not least that the Second World War, the most devastating conflict ever, was started in September. From the earliest days of my life, I've avoided it like the plague. I was born six weeks premature, in August, I firmly believe that this was a deliberate ploy on my part to damn well ensure that I avoided being a September baby. I also believe Virgo to be the worst, most unlucky sign of the zodiac, with Leo's (like me) being them best. Don't get me wrong, I've loads of friends and family who are Virgos who are lovely, but I believe this is an albatross they bear with dignity. Let's face it, what sane person would be a virgin, when they could be a lion.
When I was a kid, September was the month when the summer holiday ended and the new school term started. I always loathed this its a passion. When teachers said 'welcome back to a new school year' I just thought arghhhh nooooo. The last few days, we've had a typical September Indian summer heatwave. Like all things in September though, such a heatwave is a crap heatwave. The temperature is lovely during the day when you are at work, but when you get home it suddenly becomes too cold to spark up the Barbie and sit in the garden drinking beer.
For some reason it is also generally a bad month for the sports teams I follow. This season Manchester City had a sudden, inexplicable loss of form and a whole raft of injuries to key players in September. I believe that the only reason they won last night was due to the fact that when they were playing, some of the world had already entered October. Even the England rugby team lost a key World Cup game. I happen to believe the Welsh are immune to the curse of September, primarily because Wales is grim all of the time, so they quite like the month. This was born out by Wrexham beating Borehamwood a couple of weeks ago in the conference!
During last month, the usual September ill fortune befell us. A car drove into the back of us in Kilburn, I had a rotten stomach bug, we had loads of irrational hassle at work, from people being inexplicably difficult and stupid and I even had to deposit my two beautiful daughters in the desolate wastes of Yorkshire to start University courses, leaving our house empty and far too quiet. As listed elsewhere on this blog a friends family suffered a tragedy too awful to contemplate and I wasn't even able to celebrate the end of the month with a bottle of wine as I'm on anti biopics, due to the prostate biopsy I am having today. Had they scheduled the surgery for September, I would have asked them to reschedule, as there is no way I'd countenance such a procedure in such an awful month.
There are a few other things about September that demonstrate its crapness. All of the months of the year until September have proper names. For example, August is for the Roman Emporer Augustus. With September they couldn't be bothered, so they simply called it the seventh month, which shows they couldn't even be bothered to count up to nine! There is even a song called 'wake me up when September ends'. A friend bought this for me years ago, knowing of my aversion to the month. Sadly, like the month, the song is a crappy, miserable dirge, that I can't stand.
I am sure that when the grim reaper comes knocking for me it will be in September, so the fact I've survived another one is surely cause for celebration!

September was the seventh month of the year in the Roman calendar as the year began in March. Anyway cheer up because it's October now.

As soon as September arrives, I feel a heavy sense of dread that lasts for pretty much the remainder of the year. Christmas time does not even thrill me as much anymore .And after that ,two of the most boring months. I really hate winter.

September for me begins a downward spiral of dread. This heavy feeling lasts for the remainder of the year.Christmas time is no longer as thrilling as it used to be. Then come two of the most boring months of the year. I really hate winter