I agree with Brian Coleman - Consultations in Barnet are a waste of money!

Back in those heady days when Brian Coleman was in his pomp in Barnet and was the only Conservative who had anything interesting to say, before he lost the plot, beat up Helen Michael and blew it all, he created something of a cottage industry in insulting the people of Barnet and inspiring bloggers to pick up their pens (or keyboards for those of you who are pedants). Brian seemed to miss no opportunity to insult the great unwashed masses. The sands of time have blurred the exact details in my mind of which particular consultation this was said in relation to (quite possibly the abolition of sheltered housing, but I am not sure. I remember the event clearly but not the context). Anyway, Barnet had done what it always does. It had come up with a rotten proposal, put this out to public consultation and then completely ignored the results. The hapless leader of the Labour Party, Alison Moore had challenged the Tories on the fact that they were taking no views of the those they had consulted. Various Tories floundered for a proper response, what can you possibly say? You give the public a proposal and they reject it. What possible reason could there be for ignoring them. A packed public gallery was getting agitated. Brian, as was his want, seized the moment. Again I can't recall his exact words, but if I can paraphrase, he stood up and said "Consultations are a complete waste of money, the public are too stupid to know what they are talking about, we've been elected to do a job and that is that". There was uproar in the public gallery, there was a look of shock on the faces of the Tories, Robert Rams sniggered inanely. But Brian knew exactly what he was doing. The Tories were losing the debate. You cannot justify the unjustifyable, but all of a sudden, the argument wasn't about the nasty cut the Tories were making. The story was "how can Brian be so beastly?". He sat down smiling, knowing it was job done.

At the time, I was incensed. Over the years, I've come to realise that Brian was right. Not that the public are too ignorant to be given a say in such matters, but in his assertation that consultations are a waste of money. We have just seen a library consultation, where the public comprehensively rejected all of the Barnet Tories ideas for reform of the Library service. What did the Tories do? They did exactly what they did in the days of Brian Coleman. They completely ignored the public. They have come up with a set of proposals that take no account of the views of the local populace. Will any of them have the cojones to echo Colemans comments that ordinary people are too stupid to actually make any useful contribution? 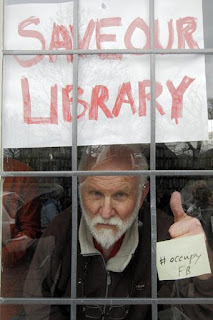 My own library in Mill Hill will be robbed of all its trained librarians. The idea is that it will be run by local volunteers. It seems the arguments that a professional librarian is a professional trade and requires a qualification counts for nothing. The Tories see the library as a large room with a load of books in. They don't see the need for anything more than Lidl style shelve stackers. The fact that a little old Lady in a wheelchair may come in with her granddaughter  and say "I read Wuthering heights by Emily  Bronte last week and really enjoyed it, can you recommend something in a similar vein in large print, as my eyesight is not what it was?" is not something they care about. Or the student who comes in and says "I am doing an A Level History project on the battle of Agincourt, what are good reference books to help me fill in the gaps in my knowledge about the period?". Or even the refugee who is trying to get a job and says "I have an interview for a job on Monday, are there any good books which can help me brush up my interview technique". Now as far as I can see, answering each of these questions has served a useful social purpose. For each of the people mentioned above, it could make a difference. I suppose a local Tory may say "do such people really exist?". Well each case is based on my own experience of libraries. My mother was severely disabled following a stroke. When she first came out of hospital, her only joy in life was a trip to the library in a wheelchair to select a large print book. My daughter has just started a degree course in history and did much of her reasearch from books borrowed from the library. As for the refugee. I volunteer at a homeless day centre and often recommend a trip to the library to jobless, homeless refugees. Not so long ago, one of the clients at the centre came in and told me he'd got a job. He bought me a book as a present. He said "Thank you so much for your recommendation of going to the library, I actually got my job talking to someone there". That is another function of libraries which is much understood by the bean counting Tory service cutters. They are a community hub.

But none of this matters. When I first started writing blogs, I had an intense dislike of Brian Coleman. As time went on, I realised that I was wrong. Brian was just a window into the thinking of the rest of his Tory colleagues. However misguided and wrong headed I thought he may be, he simply said in public what all f his colleagues say in private. If this wasn't true, they'd have kicked him out long before he got a criminal record. In fact, in many policies Brian was probably one of the more sensible and moderate Tories. It is a matter of record that he opposed One Barnet and his more Thatcherite mates ignored him.

The sad truth is that with all the money they've spent on the consultation, they could have afforded a few more librarians. Consultations are big business in local and national government. They are almost universally totally ignored. Take Heathrow or any major road. These are universally opposed by the local populace. Why wouldn't they be? The locals get no benefits and nothing but hassle. What is crazy is that it is often a legal requirement to consult but there is none at all to listen. Which is why, Brian Coleman was right. Why go through the pretence? Simply scrap the whole stupid charade and spend the money on something useful, like librarians perhaps?

Firstly, I want to thank you for standing up for libraries. For using them, recommending them and defending them.
However, there are one or two things I'd like to clarify and expand on. Any librarians left on the frontline in Barnet Libraries are there incidentally. Barnet stripped it's frontline teams of professional librarians nearly 3 years ago, reducing a team of 26 adults and children's specialists down to 6, now based at NLBP planning and developing the service. What you encounter now are dedicated, skilled and experienced para professional staff helping you on a daily basis. That was the beginning of the deprofessionalising and attempted destruction of our library service.
Secondly, if we were to take one of your typical customer examples, the job seeking refugee, yes there would be a book recommendation and loan involved at some point in his journey, but Barnet Libraries go much further than that. If his English language skills were poor, he'd be referred to one of the many Conversation Cafés run by library staff across branches. Here he could practice his spoken English, access skills for life stock, make friends and contacts. He'd also be referred to the free Transparent Language tool Barnet Libraries provides online to develop his English further.
The next step would be to offer IT training at one of their library based sessions. This can be anything from the basics of using a computer, to more advanced applications.
Subsequently, he could attend one of the job clubs also run in libraries. Here he'd receive advice about how to search for vacancies and how to build a CV. While he was there he could also talk to library staff about how to access benefits and housing options, even receiving help with filling in the long and complicated forms needed to qualify for these, followed by authentication of his ID and supporting documents by authorised library staff in order to fast track his application.
Lastly, he could take advantage of the new project to be launched in November by the Service Development Librarian Team (those 6 remaining librarians), who've recently won funding from the Tinder Foundation to run a digital inclusion and employment related IT programme for people on low incomes in the borough. Using portable technology, library staff will deliver 6 week programmes of IT learning and career development sessions introducing users to sites they subscribe to like My Work Search, giving access to online job advice, CV builder tools, interview techniques and databases like Monster.
Yes, this user will probably take home a book or two as well, and yes he may meet people whilst at the library who'll say, "I saw a great job advertised down the road yesterday", but this is just the icing on the cake of a huge range of resources he could have just accessed.
Can this be delivered by teams of volunteers? I doubt it.
Could this be delivered by staff during the proposed 20 hours of staff time in a Core + library? I doubt it.
Could this be delivered without a librarian team, procuring the systems, successfully bidding for funding, training frontline staff to deliver? I doubt it.
I could have used any of your customer examples to tell a similar story. Adult, child, OAP, toddler, student, refugee, job seeker, low income parent.......all would access a different life changing part of the service.....and yes a few books would also be involved :)