A night at Wembley to be proud of


If ISIS and the French terrorists were seeking to divide us, I have to say that on the basis of my own eyes last night, they failed miserably. I wasn't planning to go to the England vs France friendly. I hadn''t bought tickets, but yesterday afternoon, I felt I really should. I felt it was the right thing to do, to show solidarity with our French brothers and sisters. My Neice/Goddaughter lives in Paris with her husband and four daughters. I messaged her on Saturday morning and asked how the family was? "Safe but scared" was the answer. No one should feel scared in their own home. So yesterday afternnon, I changed my mind and thought I really should go. I bought tickets for myself and my son online and at 7.30pm, we found ourselves making our way into Wembley Stadium. 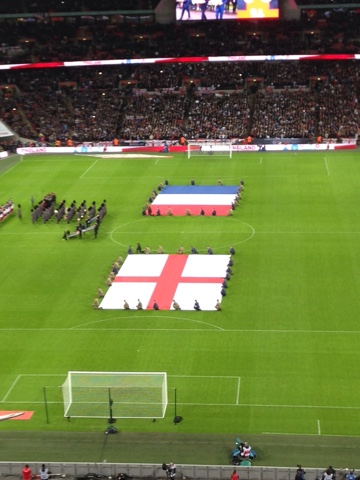 We go to most England matches and many other games. This had a completely different atmosphere. For one thing there was no segregation. It was noticable just how many families and young children were there. We made our way up and I bought a cheeky beer. French and English fans mixed freely. I took some photos for groups of French fans. We had some freindly banter. It was an extraordinary atmosphere.

Then we had the National Anthems. First up was God Save The Queen, passionately belted out. Next up the Marseilles. This was belted out with equal gusto. At many England games, the fans have in the past shamefully boo'd the anthems of opponents. Not this time. The experience was extremely moving. I said to my son that we were priveliged to be there, but added I hoped he'd never see another night like it. For me, it was the worth the entrance fee just to soak up the atmosphere.

During the game there were Mexican waves, passionate singing, but none of the usual obscenities we expect to hear at matches. Given that England and France are traditional rivals and this is very much a local derby, it is an extraordinary testimony to the people of our nations that we could put all of that aside and make such a memorable night. The football was almost incidental. It was a good match. I suspect that the French players were somewhat overcome by the occasion as England were sharper and played the better football, crowned by a glorious goal by Dele Alle. But that didn't matter. As we left I exchanged words with a French fan. He said that for him it was a night he'd never forget. He was somewhat overcome.

Whatever ISIS hoped to achieve, they will fail. That can be the only conclusion from the scenes I saw at Wembley. Tragedies bring people together. I never thought I'd see and England vs France game at Wembley played with such a sense of love and friendship. I hope that something of that atmosphere persists and carrys football forward. It can and it should be a game to bring people together. Last night showed that it is possible for it to realise that aspiration.