With Cameron and Dawkins, God help our disabled people 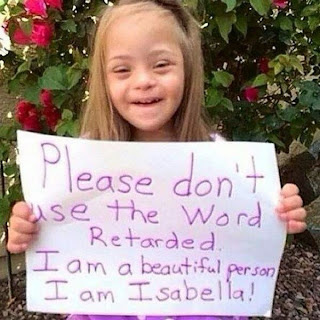 Just suppose you are in your 70's, you have a life limiting cancer and you have  a daughter who is in her 50's, who lives at home with you and who has Downs syndrome. How do you view her future? You know that at some point you may no longer be around to fight her corner. The loving care she has received all of her life from you may well end up as the responsibility of your local council. If you live in Barnet, it is possible that in effect, Richard Cornelius, the Conservative leader of Barnet Council will ultimately become her corporate parent. I wonder if at Christmas Mr Cornelius dons the santa outfit and delivers presents to all of his "corporate children". Since 2010, we have seen cuts to council budgets that are completely unprecedented in the  history of Barnet Council.

Whilst the vast majority of the fit, well, healthy and financially secure people in Barnet have seen no change at  all to the quality of their lives as a result of the cuts, the disabled,, who often have no one to speak for them have seen a very different story. Barnet Council outsourced their care and services provision to a company they set up and are the shareholders in, called Your Choice Barnet. This was a cynical move, designed purely to ensure that the Councillors could wash their hands of the effects of cuts. Within a year, this organisation failed and needed a multi million pound bale out from the taxpayer. In an obscene act of betrayal, the Barnet Labour group, lead on the committee by Barry Rawlings (now leader of the Labour group), backed the Conservative report that stated that returning to an in house model was not an option.  What I found particularly sickening was the recovery plan involved cuts to front line staff wages, whilst the directors of the failed company were receiving monstrously large salaries. Many staff, who were already struggling to cope on relatively low salaries, were forced to seek new jobs elsewhere. Anyone who has ever dealt with disabled people will know that continuity of care is vital. Knowing peoples regimes and habits is vital to their well being.

It was not only the staff that suffered. Transport budgets were cut, resulting in isolated people being unable to get to day centres for activities. The day centres were forced to operate on a more commercial basis, so teas, coffees and biscuits became far more expensive and quality of activities were scaled back. Of course, for those who have no disabled relatives or friends, this is not a problem at all. We can sit in the fancy bars and restaurants of Barnet and forget all about those less well off. We can spend the extra few pennies a week that we've saved in council tax on another Mocha or Latte in Starbucks, and watch the profits of that go to tax avoiding billionaires in far away countries, safe in the knowledge that it doesn't affect us.

But it would be wrong to think that it is only in Barnet that the disabled have faced challenges. Under the Cameron regime, council budgets across the UK are cut. The disabled have no electoral presence, unlike other minorities, who are seemingly far more able to organise their resources. The first victims of cuts are always those least able to represent themselves. Given that Cameron had a disabled child, I find it truly saddening that he hasn't done anything to ensure that the peer group of his son were protected. Cameron spoke of the UK being a Christian country recently. What form of Christianity gives disabled people a good kicking? It is not a form I am familiar with. Sadly it appears that for the likes of Cameron, Christianity is a fig leaf to hide all manner of disgusting views with. The list of assaults on the disabled, from budget cuts, to the scandalous policy towards Remploy, who specialised in jobs for the disabled is seemingly endless. Up and down the country, in every neighbourhood, people who have pretty difficult lives to start with, have had misery upon misery heaped on them.

It is not only the hypocritical Christian right that has been putting the boot in. Yesterday we detailed how Richard Dawkins has put the boot into people with Downs Syndrome. Dawkins stated that it is immoral for parents to bring Downs Children into the world. Whilst I would personally categorise such views as  Nazi and a form of Eugenics, Dawkins claims to be on the Liberal Atheist left. What chance do disabled people have with a pincer movement from the Christian Right and the Atheist left? If you start to join the dots of what has happened .... Attacks on budgets for disabled services from the Christian right....  Attacks from the Atheist left on the right to exist of disabled people .... The libertarian right and humanist left backing assisted suicide ..... The disdain revealed today for the advisers of Cameron for black people and the white lower working class....

One has to ask, if you were the person I mentioned in the first paragraph of this blog, how wuld you feel about your daughters future. Once we have assisted suicide and we have a consensus that certain "economically unviable" groups have no right to exist, what is the next logical step? Does that bother you? It scares the hell out of me. I can only think "God help the disabled in the UK", because in Barnet we've seen that neither the Tories or Labour care for them and on a national level the Christian right of Cameron and Osborne and the humanist left of Dawkins don't give a stuff for them.

However the word hate is missing from your message , for example I know of parents of a disabled child who hate and detest their child, and have abandoned them to their partner or the local authority. I believe that Cameron is one of those parents, because nobody with any love, concern or empathy with a disabled child, could possibly have run what has in effect been. A hate campaign against the disabled and sick since Cameron came to power six years ago, our so called PM truly hates the disabled. The fact his adviser Letwin who I have no doubt retains his view of black people he held 30 years ago is his policy adviser , suggests the disabled and U.S. low class white people have all been put in the same category of hate.

Cornelian however is another story , he represents the abused becoming the abuser. This sick minded man has led the destruction of quality of life services in Barnet for the disabled that were. Into a Your a Choice disaster where the quality of life of the disabled is not considered because Cornelius and his Tories , supported by the snake in the grass Labour leader do not believe the disabled are entitled to any quality of life. Furthermore they now refuse to support any quality of life by driving away skilled care workers, and replacing them with any Tom Dick or Harriet as long as they are cheap zero hours labour.
What sickens me the most with Cornelius Cameron and their councillors and ministers is they have enjoyed destroying the lives of the disabled , and I have absolutely no doubt if they thought they could get away with it, they would exterminate all disabled people, along with the long term sick, the homeless, in fact anybody reliant in any way on benefits or unable to buy a home.
I have no idea what form that extermination would take, perhaps starvation and suicide through benefit cuts, which is already paying dividends but not fast enough, perhaps by pushing through a voluntary euthanasia bill then forcing lethal injections on the vulnerable without their knowledge. Perhaps even gas chambers that so disgustingly and inhumanly worked so well for the Nazis.
When you think of the history of the families of Cornelius and other Barnet councillors, along with the family history of Cameron, it is just another example of the abused becoming the abuser, they are enjoying this disabled bashing with relish.

I fear for my 52 year old daughter when my cancer eventually takes me, because I know Cornelius and his crew supported by the low life Labour leader Barry Rawlings, along with Cameron and his crew hate her and her peers, and will stop at nothing to rid society of the scourge of benefit claimants, because that's what disabled people are. All I can pray for is that Cornelius and his crew along with Cameron and his mob like the evil bitch Thatcher are struck down with a disability, and they get a chance to feel the growing hatred they have given birth to, towards anybody with a disability.