Last month many people voted Conservative as they believed the Conservative Party in Barnet are the party which will be most likely to manage the council finances properly. It may come as a bit of a shock to them that there is a huge budget overrrun and that Barnet Council Taxpayers will have to pick up the bill. It may seem strange to find out that this black hole, which is millions of pounds was apparently not known about just six weeks ago before the Council elections. Next Monday, we have a meeting of the Council Financial Performance and Contracts committee. The reports pack for this meeting lay bare the size of the deficit. 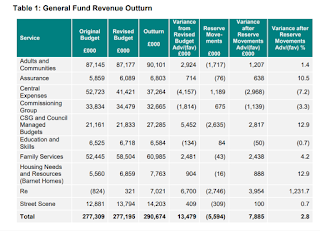 The cause of this is also detailed in the paperwork

So how will the council deal with this? There are some clues in the papers.


"The council will seek to further reduce this pressure by ensuring that all possible external funding sources are maximised. It is anticipated that an additional £1.5m income can be achieved by reviewing its recharges and the identification of additional income within the Environment group of services."

"Chief Officers are working to mitigate this pressure. Actions being put in place to manage the position include a vacancy freeze, control and review of all agency placements within the organisation, a review of all budget areas for non-essential expenditure and the introduction of recovery plans across all overspending services. "


So what does this mean? Well "all possible external funding sources" means you and me - The Council Tax Payer. Whether we own a business and require licenses, own a car and pay for parking or have any other reason to transact with the council, they want to maximise how much they charge us. They then say they are going to review staffing arrangements and all non essential expenditure. Just bear in mind that the Tories have been running the council since 2002. It would be reasonable to expect that in the last 16 years, if they'd been doing the job properly, this would have been reviewed a fair few times. They are either saying "we haven't been doing our job properly previously" or they are saying "over the past four council elections, we've mislead the people of Barnet about how seriously we take saving money".

And then there is the final one. They will be raiding the reserves. Do you remember this tweet from the Barnet Tories before the election?


RT ChippingTories "Wait till they hear Labour want to pay for it out of Council reserves.. Anyone can promise freebies, but can Barnet Labour pay for it? Nope.

Crime has soared under SadiqKhan after falling under BorisJohnson. The Mayor is failing us. https://t.co/2XNXwCxXf5"
— Barnet Conservatives (@BarnetTories) April 26, 2018


The Barnet Tories are doing exactly what they berated Labour for. It really is a shame that there is no mechanism for sacking politicians when they are elected having mislead the public so badly.

I have three questions for the Committee that I have submitted.

1. The papers for this committee meeting demonstrate that the council can only maintain its budget by raiding council reserves. Does the chair of the committee agree that such a large scale raid on the council reserves simply to keep "Business As Usual" functions running is unsustainable?

3. The report states that the crisis will be resolved  "by ensuring that all possible external funding sources are maximised" - Given that Council tax is the major source of external funding for the council and that the papers say this will be maximised, does this mean that over the next two financial years, the taxpayer will be charged the maximim possible increase? IF not please state exactly what these sources are and what is meant by "maximised".