Guest Blog by
The Barnet Alliance for Public Services

On Tuesday 26th June at 11am, Capita PLC held their AGM. In attendance were a dozen or so residents from the Borough of Barnet, four of whom were in possession of 1 Capita share each, and so took up their right to attend and to speak at the meeting. The AGM was held in the City of London and was a fairly low key affair, with no more than c. 50 shareholders in attendance in total.

It was reported that the media had been “banned” from the meeting: https://www.telegraph.co.uk/business/2018/06/26/media-banned-capita-agm-despite-government-calls-transparency/

The non-shareholding members of BAPS, remained outside the venue wearing “Kick Out Capita” T-Shirts and handing out leaflets to Shareholders arriving & departing.


Some interesting discussions were held with shareholders – many of whom left early, seemingly in disgust. Whilst none were willing to speak on film, some notable quotes were as follows:
“The meeting was very bad, and they’re going to go bankrupt”
“They’re hopeless, you have our sympathies, you really do”
“They [the Board] are trying to blame the former Directors for the current shambles”
“I’ve lost £40,000! The Capita CEO was blaming Barnet Council for the poor quality of services , and says a meeting has been set up next month with Barnet’s CEO”
“It’s scandalous what’s happening, and a disgrace that [Capita] was set up by former public servants. They’re running it into the ground”
To put these comments in perspective, the Capita share price has plummeted over the last 2 years from when it was running at between £10-15, it is now at c. £1.50. This year there has been a suspension of a £200m dividend payout, and a £700m share issue in order to keep the company afloat. The new CEO, Jon Lewis was appointed in Dec 2017, and given the task of a “turnaround”……
Talk from the Board inside the meeting was reportedly largely along the lines of assigning blame to those who’d been in charge before; & to those (like Barnet Council) who were employing their services but directed them on tasks in a way that made the services poor…?! As well as optimistic talk of future endeavours and prospects for the business – all fairly vague with the exception of the recently awarded £500m MOD contract by the Government (to a company with a risk rating of 10/10), which all sounds very familiar and as if no lessons have been learned from the collapse of Carillion.
https://www.theguardian.com/business/2018/jun/19/capita-awarded-mod-contract-despite-having-highest-risk-rating

Pertinent comments from the Board in response to questioning from our shareholders, include:
“[Those problems] are down to past behaviours of the group; we intend to run things differently in the future”
“I’m reluctant to get into specifics about Barnet, because we are currently in discussions with Barnet about how the contract might evolve in the future. It is important to remember, that we manage those contracts but take direction from the Council about the tasks we are asked to perform.”
“We are making a profit from our contract with Barnet Council. We make a modest profit from our public sector contracts”
Regarding the need of the Council to pay for “extras” and “gainshare” from reserves:
“That’s within the control of the Council’s responsibility, not ours….”
“We operate in a different segment to Carillion and offer very different services. We have assets we can sell off readily at a premium and our cash flow is much better….”
With regards the MOD contract and the following article https://www.theguardian.com/business/2018/jun/19/capita-awarded-mod-contract-despite-having-highest-risk-rating
“We feel that that was an overly negative review, it was pre re-structure & rights issue. We have since taken steps to de-risk, invest & re-invest and reduce our leverage to between 1-2. Our disposal programme [selling off construction & parking divisions] will make us much more sustainable in the future….”

All in all, we feel that the actions of a small number of us have made a difference, and have set off quite a few ripples towards our goal of kicking Capita out of Barnet.
The CEO (and the PR representative of Capita) have promptly been in touch with members of our group asking to set up meetings with us to discuss the issues raised. Many of the shareholders we spoke to took real notice of the Barnet issues raised in the meeting.
Watch this space……… and if you’d like to help us on our mission, we meet every Tuesday at 6.30pm in the Greek Cypriot Centre. You can also follow us on twitter @BarnetAlliance, on facebook @OurBarnet and sign up to our mailing list by emailing barnetalliance4publicservices @gmail.com 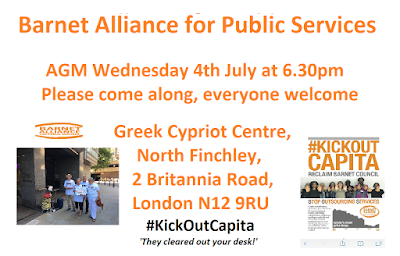