Tonight we have a meeting of the Barnet Council housing committee. There are some interesting key facts in the reports. Some of these are very worrying.

There appears to be a crisis in provision of Temporary Accomodationn for vulnerable people, with costs spiralling 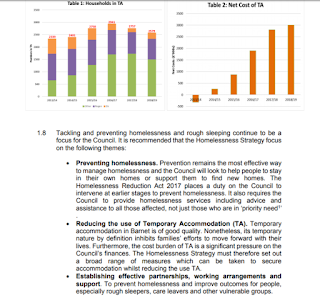 The papers report that Barnet council is having severe problems housing people in emergency temporary accomodation (This has a RAG status of Red which means that it is in the highest risk category on the councils monitoring system). The reason is in part due to financial constraints meaning the council cannot secure accomodation.

BH/S1 Numbers in Emergency Temporary Accommodation (RAG rated RED) –
244 against annual target of 175. Numbers have risen due to reduced supply of available longer-term temporary accommodation (TA) due to a high volume of 58 properties handed back to the provider and due to reduced procurement of longer-term TA for financial reasons. However, overall numbers in TA reduced for the fourth successive quarter to 2,579 due to focused TA reduction activities, which include providing hand-holding support to assist clients with move-on opportunities. Over the past 12 months the average time spent by clients in emergency TA dropped to 38.7 weeks (from 67.8 weeks last year).


When financial problems impact the most vulnerable people in Barnet, clearly there is a crisis that needs to be addressed. The papers also show that homelessness remains far too high. This is a disgrace. It also details that there has been a 7% reduction in the council accepting cases. I personally object to the council referring to homeless people as "customers", but I guess I'm just old fashioned.

1,554 homelessness applications were made (compared with 1,583 last year), of which 506 (33 per cent) were accepted (compared with 632 (40 per cent)) last year. Mitigations focusing on early intervention, prevention, family mediation and reduction in the use of temporary accommodation (TA) continued to deliver positive results. Homelessness preventions stand at 1,140 in 2017/18 (compared with 972 last year). The piloted Family Mediation Team saw 88 applicants who faced eviction from family or friends’ accommodation for reasons of overcrowding, relationship  breakdown and affordability. The Team prevented homelessness in 24 of the 88 cases, and mediation work resulted in only 9 out of the 88 customers moving into TA. Overall numbers in TA reduced to 2,579 (from 2,757 last year). The team prioritised moving customers who were  entrenched in Emergency Temporary Accommodation (ETA) and the average time spent by customers in ETA fell to 38.7 weeks (from 67.8 weeks last year).

One other disturbing feature is that it appears that the contractors building the Moreton Close scheme have bodged the laying of the foundations.


"Providing suitable housing to support vulnerable people – the contractor for the new build extra care scheme at Moreton Close reported a delay due to the foundations of the scheme being under-engineered. Remedial work was undertaken and construction fully recommenced on the remainder of the scheme unaffected by the potential loading issues. This resulted in a delay in completion until December 2018. Clients are being identified to move into the extra care scheme and units are being allocated. A  communications plan and information about the service is being developed so that the scheme can be promoted to staff and potential residents."

This has impacted vulnerable people hoping to be rehomed. This appears to be the second major case of "under engineering" by council contractors impacting local residents. There was a huge impact on residents when refuse collections were affected by a badly laid floor in the new council depot in Oakleigh park.

There are some rather interesting slides detailing the what is happening in Barnet and why housing pressures will increase. 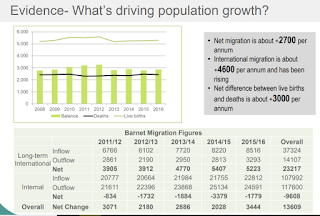 We are due to see massive population increases in the Borough between now and 2041. It is interesting to note that the Council expects Barnet to get less diverse between 2015 and 2021. I wonder if this is due to their policy of gentrification? 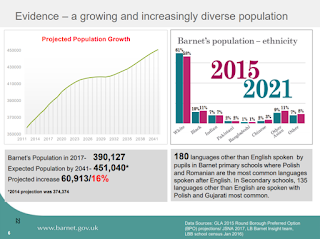 What is clear from these figures is that there will be ever more pressure on the green belt, ever more large scale buildings and ever more rabbit hutch flats.