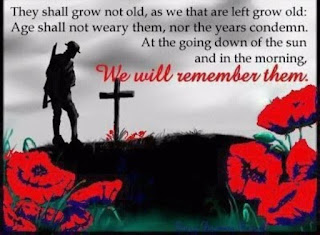 Since this blog started, back in 2008, Remembrance Sunday has held a special place in this blog. My father was a world war two bomber pilot, was shot down over Ploesti in Rumania, his best friend and rear gunner F/O John Charles Murphy was killed. He was held POW, escaped and made his way back to the UK, to marry my mother on 28th November 1944. My admiration for the man and his generation is unbounded. As a teenager and a young man, I struggled with the fact that I didn't think I'd ever be a tenth of the man he was. At the age he was doing his military service, I was playing guitar in a punk rock band. I was 24 when my father died suddenly. The shock of thios devastated me. I realised that I would never have the chance to build a proper adult relationship with my father. He would never see my children, that he sacrificed so much to build a safe world for. He would never see the amazing business that I built. Had him and his generation not made the sacrifices, I doubt a world ruled by the Nazi's would have a popular music scene in the way we have. The music I love blues, rock and reggae all has it's roots in the black music of the USA and the Carribean. To the Nazi's such music was degenerate. The Jewish friends who I've grown up with would have been wiped from the face of the earth, with their families. My friends with disabilities, my cousin with Downs syndrome would have been murdered in a festival of Eugenics. There would be no London Paralympians. Sir Stephen Hawking would not have written "A brief history of time", he'd have been summarily euthenised.Our high streets would not have Indian restaurants, we wouldn't have bought smoked salmon bagels from Jewish owned deli's on Sunday mornings. The high camp of Strictly would have been far too decadent,  and members of the LGBT community would be sumamrily bumped off.

I have often wondered what the world would be like in our modern era if the Nazi's had won. Would the regime have imploded when it ran out of enemies to murder? Who would have been the next targets after the Jews, the Gypsies, the LGBT community, etc. We will never know the answer to that question, thank God. The sacrifices of my Father, his friends, his comrades, and like minded people ensured that such tyranny was defeated. It used to upset me that I couldn't ever really properly repay my debt to him. It took a long time to realise that the way to do this was to do everything I could to ensure that the legacy of his generations sacrifice is protected. I suppose that on this day, when we wake up to a new era in US politics, we see that this is possible. In the US, people declaring support for President Trump often blatently paraded symbols of Nazism, racism and hatred. This has been banished. It is a good day.