For the past five years, I have been working with Mark Amies, who is the an expert on Londons heritage, a BBC Radio London contributor and published author, on a campaign to Save The Railway hotel. Mark has recently launched a petition to save this historic landmark. We would like to see Barnet Council take proper enforcement action, against the owners, who have let this rot for far too long. If the owners refuse and do not reverse the years of neglect, with a proper schedule of renovation and a timetable to bring the hotel back into use, we would like to see the Council issue a compulsory purchase order and then ask for bids from local groups to run as a community pub/community cafe/arts space/community space, with low cost accommodation attached for key workers and young people in the spare hotel room areas. We believe that this would make the Railway hotel the centrepiece Edgware deserveds. The space at the front of the hotel could be used at weekends for community events and it would give a massive lift to the area.
This is what Mark says in his petition. 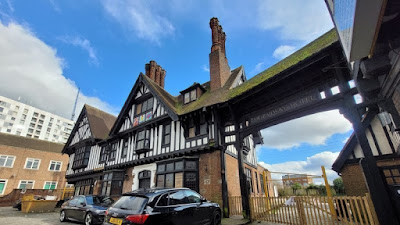 "We call on Barnet Council to use the powers available to force the owners of the Railway Hotel in Edgware to maintain the building as required for a Grade 2 listed building. Furthermore we request the Council to urgently review the case for a compulsory purchase order, to return the building to its former role as a centre for the Edgware community"

Two years ago, I made a film with Mark highlighting the issues around the Railway Hotel to try and force Historic England and Barnet Council to take action.

As nothing happened and the decline of Edgware Town centre got worse, we made another film last year. This has had over 4,500 views. People do care. There was much social media response, but sadly with the pandemic, this petered out.

Mark recently visited the Railway Hotel and in over a year, nothing has improved. It is clear that the assurances of Barnet Council mean nothing. We need action.

Mark first raised a petition in 2016, getting over 2,000  supporters. Sadly this was also ignored.

There is a by-election in Edgware ward in May. We intend to make this symbol of the Council's neglect of Edgware the centrepiece of the campaign. We ask everyone to support Marks petition to ensure that the strength of public feeling is recognised. The by election represents a unique opportunity to focus the eyes of the council on Edgware. If you are an Edgware resident, the neglect is having a huge negative impact on property values in the whole area, the flytipping, litter, graffiti is a festering boil spreading out across the whole area. If there was a vibrant community hub in an attractive, properly restored, listed building, then it would lift the whole area. Please support Mark Amies in his work to return the Railway Hotel to its place as the centrepiece of Edgware High Street.

Email ThisBlogThis!Share to TwitterShare to FacebookShare to Pinterest
Click on Labels for related posts: #SaveTheRailwayHotel, edgware, The Railway Hotel