Barnet Council Freedom Pass fiasco - A victory for the disabled, the bloggers and common sense

I got a message last night on facebook from Jenny Fairclough who is the young lady at the centre of the Barnet Council Freedom pass fiasco. Now if you've been asleep for the past two months, you may be unaware of this horrible scandal. Barnet Council administer the Freedom pass allocation of disabled people in Barnet. The criteria are set out by London Councils and each Borough administers these. They are called Freedom Passes because they are just that. They entitle the holder to have the freedom to travel. Enlightened people recognise that this is good for all. It helps keep people fit, active and healthy. The Barnet Eye broke the story in April that Barnet Council had started to revoke Freedom passes of disabled people who fully met the elegibility criteria. 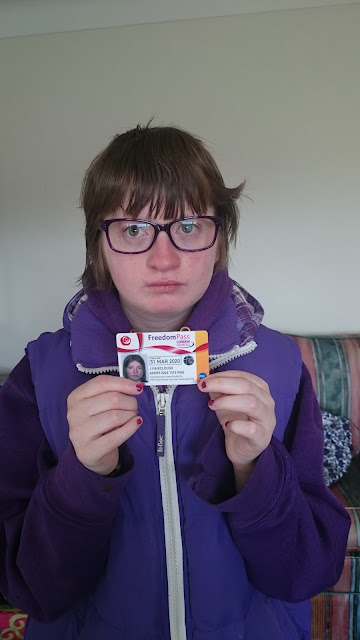 This prompted the mum of a second young person to get in touch. Her daughter had also had a similar experience.  When we published the blog, she was waiting to discuss with her employers about going public. So we didn't reveal her identity. I was also contacted by Mrs Angry, my fellow blogger. The Barnet bloggers regularly discuss current matters.As we aren't paid for our activities and do this in our spare time, we liaise with each other to ensure we get the maximum impact. Mrs Angry was as outraged as I was. When she saw my blogs, she realised that she'd seen a young person receive similar humiliating treatment. We discussed strategy and Mrs Angry had a plan of action to get to the bottom of it. So between us, we started to dig. Then fellow blogger Mr Mustard used his contacts at the Evening Standard to get their interest. Around this time Siobhan Fairclough got the OK to go public. The Local papers and the Standard got involved. Mrs Angry first established that it was Capita who had actually changed the criteria. She then wrote to the Barnet council monitoring officer, who is responsible for ensuring the Council obeys the law. It became clear from her conversation that Barnet Council had made a monster cock up.

Which brings us back to the message on facebook from Jenny Fairclough (the young lady who had her freedom pass stopped). The great news is that she's got her freedom pass back. Mrs Angry fully explains what happened on her blog. I suggest you read it. Here is the key piece of information

The council has apologised to eight residents that have complained about their passes being removed. All other residents who have had their passes removed will also receive a letter of apology.Of the 230 passes that have been removed, 207 of these will receive a new temporary pass. The remaining 23 passes will not be reinstated because the pass holder has either moved out of the borough or no longer need their pass.


It is clear that without the Barnet Bloggers, this scandal would never have been exposed and 207 people who are entitled to Freedom Passes would be illegally deprived of them. What have you done this year that you are proud of? Well I am proud that I've helped 207 disabled people to get their freedom pass back. Mrs Angry should be given a civic award for her dogged persistence in getting to the bottom of this. And what about the 33 Conservative Councillors who are meant to look after the voters of Barnet. Well unlike me, they have no right to feel proud. Unlike Mrs Angry they have no right to ne nominated for a civic award. But they are entitled to a minimum of £10,000 in allowances for doing their job. They get a string of other perks such as a free parking pass, so they can park anywhere they like without charge.

In a month where the ineptitude of Barnet Council and its ruling Tories has been laid bare, we ask how long can they have the bare faced nerve to keep pocketing this cash, when clearly they are completely useless?