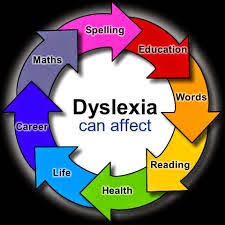 For those of you who haven't read my dyslexia blogs before, here is a little preamble and introduction, so you know who I am and what I do and why I write this stuff. For those of you who know the story, skip to the end of the paragraph for todays installment. Let me give you a bit of Background so you know who I am and what I do. I was born in 1962. I didn't start talking until I was 4 years old (at all, not a single word). My parents thought I was deaf. My reading age at eleven was 5. When I was fifteen I started a rock and roll band called the False Dots, the band is still going strong. When I was 16 I started a business called Mill Hill Music Complex (although then it was simply called the studio), a rehearsal studio, as we had nowhere to rehearse. The business has grown into a very successful enterprise, one of Londons biggest and most well respected independent studios. We now have 16 studios and a music shop and also have a photography/video studio and a dance studio. I also have done IT work, mostly on a freelance basis since 1983. In 2012 I also moved into film production, producing two highly acclaimed documentary films, both of which had screenings at the House of Commons. When I was 31, a friend suggested I had a dyslexia test. To my surprise I was told I was moderately dyslexic. This made me interested in the subject. To my amazement, what I have learned over the years is that my lack of educational aptitude, my feelings of anger and injustice and the core of my personality have been formed by the fact I cannot read words in a linear fashion. In 2013, I have set one of my objectives to use this blog to let dyslexics know they are not alone, to suggest that people who think they may be dyslexic to get an assessment and toget people who have dyslexic children or siblings to understand the issues that they face.

I'm a little bit in turmoil right now. I've not felt quite so angry for a very long time. I'm not sure if I am alone amongst dyslexics, but I do find that I can get irrationally angry about things which do not always warrant anger. Most of the time I can keep this under wraps, but sometimes I find that I can't and the anger makes me feel physically sick. I also find it very exhausting. You are probably wondering what terrible thing has happened to make me feel so angry. The strange thing is that the answer is "absolutely nothing". So you will probably be asking why I am feeling angry? The answer is quite simply that at the tender age of 53, I had a moment of clarity recently where I realised that it wasn't dyslexia that has caused the vast majority of the issues I've blogged about for the last eight years. Dyslexia simply means that I process information in a different way and at a different rate to the majority of my peers, friends and relatives. There is no earthly reason why this simple fact should have caused me the anguish and problems that it has. In my moment of clarity, the realisation came to me that this wasn't the problem. It never has been.

So what is the problem? Sadly this dates back to my earliest years. I've no idea if this would have been different had I been a single child, rather than the youngest of six children (none of my siblings are dyslexic). But as the youngest of six who had five very bright siblings, I found that even from the earliest age, I was different. When you are a child, being different means being vulnerable. In nature, the weakest in a litter is known as the runt. It is squeezed out, deprived of food and warmth. I was never deprived of food or warmth, but I now realise that I was vulnerable. This really kicked in when I went to school. It wasn't the dyslexia that teased me, humiliated me and baited me. It wasn't the dyslexia that took great delight in making me the laughing stock. Sadly that came from those paid to educate me. By their actions, they gave permission to classmates to tease and taunt. I wasn't unique and I doubt that I was particulalrly badly treated compared to some. Some have been pushed over the edge. But as I say, it wasn't the dyslexia, it was those paid to educate me and those who I thought were friends that caused the real pain.

I was lucky, I have had very good friends. People who have stood by in bad times as well as good. They are the ones who didn't join in when the teasing started, who stood beside me, rather than undermining me. But just imagine for a second if the teachers in my early years had done their job. Just imagine if, rather than publicly berating me in front of my friends and classmates, they'd tried to help me? Just think how much happier my life would have been? Maybe my grades would have been better if those teachers had acted to stop the taunting, rather than being the cheerleaders.

Is it rational to be angry with people you haven't seen for years and who were presumably "just doing their job"? Well they all got paid didn't they? Presumably their terms of employment didn't say "humiliate and upset vulnerable children". Now if I was the only dyslexic to ever suffer this, I guess I'd just suffer in silence, but it seems that it is still a problem. We still have young people suffering with depression and anger as a result of bullying. Not every teenager who is bullied is dyslexic, but every one is vulnerable and as I understand only too well what being vulnerable is all about, I can join those two dots rather easily.

And that is what has made me angry. Schools are too focussed on their place in exam league tables, to worry about the misery of those who are suffering. Many schools are not in the least interested in dyslexics and those with other learning difficulties. Many heads of so called "prestige schools" would rather have no dyslexics at all. They are simply a blight on the results. It is not the fact that this is discriminatory that bothers me most. It is simply the fact that some young people are suffering and deeply unhappy. That is a disgrace. Some dyslexics are fiercly intelligent. They are being massively failed by the prevailing views. I don't like the term "special needs" I prefer "different requirements". I didn't have "special needs". I simply needed respect and a recognition that to shine I needed to do things in a slightly different way to my mates. I don't believe that giving children, even if they are naughty, a bit of respect is an unreasonable demand. The fact that some do think that, is a rather difficult thing for me. The penny has dropped. It is not dyslexia that is the problem. It is the way society deals with people with dyslexia. That is a painful realisation.

Thank you for this Roger.
There are a lot of people who have suffered like you who keep quiet about it
Rita