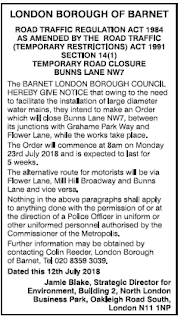 Yesterday I happened to notice a post on the Mill Hill Neighbourhood Forum Facebook page about the closure of Bunns Lane for a period of five weeks, starting 23rd July (less than a fortnight away). As the stretch of road to be closed is where both accesses to the industrial estate where our business is based, this will effectively mean that our business is unable to operate for a period of five weeks. Given that we've already taken pre-payment for dozens of sessions, and summer is a busy time for local youngsters to use our facilities to make music, this could not be a more serious issue. It is not just me. There are dozens of businesses operating from the site and around 150 jobs linked with the site

How on earth can a council plan a road closure without informing businesses that will have massive disruption. This is not the first time that Bunns Lane has been closed by utilities and for Motorway maintenance. Previously, the contractors doing the work have come down and had site meetings, ensuring that disruption is minimised. We accept that maintenance needs to be done, but it is in less than two weeks and we've not even been officially notified, let alone had any attempt from anyone to form a workable access plan.

To make matters worse, the telephone number listed in the advert is currently unobtainable. There is no email contact for the officer and there are minimal details of what is happening. This map shows our accesses and the closed section of road.

As I couldn't contact the number given, yesterday I sent an email to the leader and deputy leader of Barnet Council, copying all Mill Hill Councillors. I received no response. Today I sent another email, copying a Hale Ward Councillor and our GLA member Andrew Dismore as well. Mr Dismore replied almost immediately, acknowledging the email and saying he was on the case.

I am also pleased to say that since I published the blog, I received a response from Hale WardCouncillor Elliot Simberg, who is a good guy, promising to look into it, so hopefully something will now be done.

The actions of Barnet Council in regards to this (Cllr Simberg excepted) are simply not good enough. It is difficult running a business in the current climate. In Mill Hill, it is getting ever more challenging. We have lost our branches of Lloyds, HSBC and Nat West, which means many businesses have had to change their arrangements for banking. Our business has a weekly requirement to pay in cash and cheques. Previously we had a Nat West account, these days we use the Co-op Bank (Federation of Small Businesses customers get free banking) and they have an arrangement with the Post Office regarding paying in. We've had to replan our arrangements as the Post Office can be very busy at the time we previously paid in at Nat West. When we banked at Nat West, we had a dedicated business manager, who worked with us closely and assisted with overdrafts, loans etc. Such roles are long gone.

Another challenge which business owners have is the Council. As tens of thousands of residents work for or run such companies, you would think that the Council would want to work with such businesses and help them to thrive. Sadly, the opposite is true. We've seen all manner of attacks on the sector across the Borough. Perhaps the best known was the abolition of Pay and Display cask parking back in 2010. This forced many High Street businesses to the wall.  Recently we've seen a spate of prosecutions "fly tipping" of reputable High Street businesses. One I spoke to was served with action, as a homeless man had removed cardboard boxes from their bin and used it as bedding.

Whilst the Barnet Eye is totally opposed to fly tipping, we do not believe that it is reasonable to serve action on small businesses, when third parties rummage through their bins, remove items and then discard them. Small businesses, by definition are not massive organisations, with pots of cash to spare. Such unreasonable behaviour is hostile and anti business. Let me give some examples, using my own experience.

My own business (I run a music Studio) has been on the receiving end of all manner of issues with the council. We've had repeated problems with planning applications. The last one took over a year to approve and by the time it was, the customer we were working with had made alternative arrangements in Brookmans Park. A site adjacent to us, was acquired by a company which wanted to install a large illuminated sign next to the M1 Motorway. There were strong objections to this from residents, however because Capita did not process the application, it was granted by default after a year. Whilst this gave the company the result they were seeking, it is clear that planning is not working and many businesses are being strangled by these sort of problems.

As someone who writes a blog which is often critical of Barnet Council, I sometimes wonder if I am singled out for "special treatment". The council paid for a publicly funded recording studio, offering free recording facilities for young people to be set up at Canada Villa, half a mile from my studios. The justification was "lack of provision locally". If they had spoken to us, we could have provided the services at around a quarter of the costs that they ended up paying. We already had the staff and equipment. Whilst I was pleased that young people had access to music facilities, I had to wonder whether whoever put the scheme together considered the effect on our business. Shortly after, the Council asked me as a stakeholder to assist with a scheme to convert Barnet Music Service into a stand alone charity. As I am public spirited I agreed. I attended several meetings and was assured that the new charity would mean a less bureaucratic music provision in Barnet. We were told that they'd be keen to work with private providers to improve provision. Once the organisation was set up, we never heard another word. The Barnet Educational Arts Trust has never once even contacted us. Sadly, there is absolutely no mention on their website of any other music provision in Barnet on their site, despite the fact that they receive public funding. I have often wondered if setting up an arms length organisation was a convenient way of not having to deal with people the council didn't like.

Do Barnet Council treat all businesses across the Borough with such contempt, or is it just reserved for myself as a blogger and any business unlucky enough to be a neighbour?