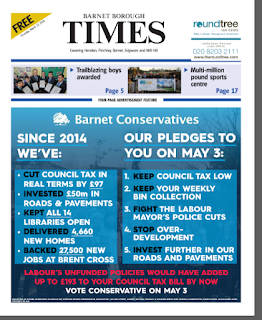 Two months ago, we had a council election. The Barnet Conservatives put this advert on the front page of the Barnet Times. When they talked about cutting council tax since 2014, they neglected to tell the whole story. They have achieved this by running the council finances into the ground. This has become crystal clear in papers released for the Financial Planning and Contracts committee yesterday. Read the Agenda reports pack
to find out just how alarming the situation is. The Council had aleady planned a raid of over £7 million on the Council reserves, just to balance the books, a further £13 million has had to be transferred to balance the budget.

Yesterday at Public Questions for Financial Performance and Contracts Committee I asked the following question.

"The papers for this committee meeting demonstrate that the council can only maintain its budget by raiding  council reserves. Does the chair of the committee agree that such a large scale raid on the council reserves simply to keep  "Business As Usual" functions running is unsustainable?"

The reply from Barnet Council was as follows. It is quite shocking.


"The June 2018 Policy and Resources Committee paper sets out the council’s position on this clearly. The council does not believe this position is sustainable and is putting in place actions to avoid such a draw down in future."

I asked a follow up question, pointing out that in private companies, when the management lose control of the finances, they are replaced. I asked if any heads would roll. The chair of the Committee, Councillor Peter Zinkin informed me that "Council Officers were working on a plan to sort things out". I presume that he thinks this means everything will be alright.

I also took advantage of my three minutes allowed under the constitution to address the committee. I had planned to say something completely different, but when I saw some of the answers to my questions, I rewrote my planned address, when I saw the answer to two of my questions. I had planned to ask the committee to set up a special action group to properly sort out the way the council administers the Capita Contract, in light of Capita telling their AGM that Barnet Council was mismanaging the contract. When I saw the responses below, it seems that I was at the wrong committee. It seems that the  "Financial Performance and Contracts Committee" does not look after the Financial Performance or the Contract for Capita. I found this rather perplexing, as I'd missed the game of the World Cup to attend the meeting and ask.

So instead, I made an impassioned plea for the Council to sort its committee structure out. If like me, you'd sat through the entire public section of the meeting, you'd have heard, time and time again, the chair saying "Not my job guv'nor" to question after question about the various ills at the council.

It seems the "Policy and Resources Committee" is responsible for administering the "Financial Performance" and "Contract" with Capita. I suggested that the Committee abolish itself and save the taxpayer some money. Given their job, I was startled to hear two rather embarrassing questions from Tory members of the committee. The first was from Councillor Alex Prager BA (Hons) ACA who asked whether the Council had an internal audit department. Being fair to Councillor Prager, he is new to the Council and he seems like a fairly bright and decent chap, but it is shocking that he was so ill prepared for the role on the committee that he could ask such a question. The rather embarrassed response from the chair was along the lines of "yes, and they are marvellous". Oppositionn Councillor Arjun Mittra did not miss the opportunity to run Cllr Pragers nose in his embarrassing comment. It is clear to me that Barnet Council is not training councillors properly for their roles on committees. I will give Councillor Prager, the benefit of the doubt. If he really wants to do his job properly, I suggest that he buys John Dix (AKA Mr Reasonable) a coffee and asks him how the council works and what needs sorting out. It will be the best £2.50 he's ever spent, if he is serious about his job.

The blog Mr Reasonable has just posted sums up my own feelings as well as fellow bloggers Mr Mustard and Mrs Angry. I could not agree more with this particular statement in Johns blog.

One of the serious problems occurred in the Capita run joint venture Re. Last year the external auditor identified a problem with £4.6 million of guaranteed income from Re that had not been paid. At that Audit meeting the S151 Officer who is the head of finance reassured everyone that the money would be recoverable. I had my doubts when the Capita partnership manager called the amount "disputed". I asked again about this money and whether it was going to be recovered at the performance and contract management committee  on 27 February just 4 weeks before year end. The reply from the council then was “The benefit to the council of additional income under the RE contract is guaranteed and does not, therefore, impact on RE’s budget performance” Four weeks later at year end and following legal advice they decided that it wasn't recoverable and it was written off. I don't doubt that writing it off is the right thing to do but what makes me so cross is that for nine months the council was in denial that it was a problem. We were also told that another £2.6 million of contractual liability had to be paid to Re and that it been "omitted from the forecast in error" but corrected before year end. Well technically that may be true but it wasn't corrected 4 weeks before year end. This tells me two things. One: take everything Barnet says with a massive pinch of salt and Two: we have a contract with Re which seems unenforceable and is costing Barnet a fortune.

The other councillor to ask a ridiculous question was Councillor John Marshall, who is a veteran, has been an MP, an MEP and the chair of all manner of Council committees etc. His question was perhaps the most disturbing thing I've heard for a long time. He'd been reading the papers and was confused as to what this "Integra" thing they were talking about was. Councillor Zinkin looked horrified. He replied that it was the system used by the council for financial reporting. The answer made it 100% clear that Councillor Marshall has no interest at all in his role as a scrutineer of the business of the council. This has been mentioned on numerous occasions over the past few months, especially as this system resulted in the audit being delivered late.

Councillor Marshall also took a rather puerile swipe at Labour Councillor Kathy Levine. He said she'd been "naughty", because when she mentioned the raid on reserves, she had neglected to mention that the Labour led adminstration that departed in 2002 (sixteen years ago) had also raided the reserves. He also pointed out that Labour intended to raid the reserves to pay for extra police officers. This was said without irony. It seems that Councillor Marshall is fine with the reserves being raided to pay huge sums to prop up Capita, but thinks that trying to put police on the beat to reassure residents when areas such as Mill Hill have become burglary hotspots is not important.

I have been writing blogs about Barnet Council for ten years now. The One Barnet Capita Contract disaster is perhaps the slowest, most predictable car crash in history. Myself, my fellow bloggers and everyone else who could be objective worked tirelessly to warn the council of the foreseeable risks. We made films, recorded interviews, dug through council papers (that councillors who were paid a minimum of £10,000 a year couldn't be bothered to). We've been mislead at meetings, had all manner of contradictory, ill informed answers and non answers to public questions. Often, after such meetings, the Barnet Bloggers adjourn to the Greyhound for a pint and to chew over the meeting. Last night, we all skulked off home. Not because we weren't thirsty, but because I believe we were just too downhearted with the lack of urgency and the sheer state of denial.

Just to emphasise their complacency, the Barnet Tories issued another inane tweet about the raid on reserves this morning. This account is reputedly run by Deputy Leader of Barnet Council Daniel Thomas. This particluar tweet has all the hallmarks of his attention to detail and intellect, although I sometimes wonder if they've got a 14 year old on work experience at Tory Towers and they've told them just to have some fun with the bloggers.


Almost as though unexpected overspends are exactly what reserves are for. 🤔Suitable for long-term funding of new police officers they are not. 🚨 https://t.co/7sQESBAzSz
— Barnet Conservatives (@BarnetTories) July 3, 2018

Oh, and before I forget, today we see the start of a court case, where the defendent is being charged with serious fraud at Barnet Council ( https://www.themj.co.uk/changes-after-council-fraud-probe/211264 ) - I think I will spend the rest of the day watching football with the curtains drawn. The news from the Town Hall is just too depressing. After all, as a resident and Council Tax payer, ultimately I will suffer the consequences and pay the price for all this.

Lets just hope England win and cheer us all up. I certainly need it